With the Hobbit movie bringing J.R.R. Tolkien’s work back into the limelight, it’s no surprise that video-game companies are jumping on the bandwagon. What is surprising is the way that this particular company chose to do it. Guardians of Middle Earth is a console Multiplayer online battle arena which manages to create a similar experience on a very different platform.

If you like MOBA or Lord of the Rings, or both, you’ll probably enjoy this downloadable title.

Tolkien’s stories may have overarching themes of peace and non-violence, but the content is certainly warlike. Given that most of his locations are towering fortresses of stone, the world of Middle Earth seems like the perfect place to stage this genre of game. There would certainly be no end to the number of towers in need of defence!

Choosing one of twenty-two different Lord of the Rings characters, the gamer takes part in fighting off the forces of evil (or good), alongside other famous characters in familiar locations. This includes lesser-known characters such as Thrain.

Aragorn’s sword, Legolas’s bow, and Gilmi’s axe
Gameplay consists of using X, square, circle, and triangle to use four assigned moves that are unique to each character. These moves can be used against enemy targets, including the towers, the soldiers, and enemy players, to bring them down. Targeting consists of a circle surrounding the character, indicating with highlights which areas will be hit by the move. Using this, the player plans where and when to attack to take down the enemy, before moving ahead into enemy territory. 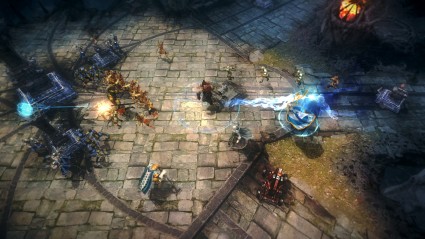 Everyone knows the good guys are going to win. They've got the elves!

The HUD has a lot going on and most of the details are small, which can be obnoxious, particularly if the TV is very far away or in an awkward place. For the most part, though, the game is smooth to play. It does lag, particularly when the player is attempting to move their character across the screen, but when it works the game is easy to catch onto and fun to play.

There is an extensive tutorial as well, so that players who are new to the game or the genre in general are not just thrown into the water and told to sink or swim. It should also be mentioned that, while the game is primarily based on the movies, characters can be overheard mentioning things that would only be known if one had read the books. Eowyn, for instance, names her father in one of her battle cries. LOTR fans will certainly get a kick out of these titbits.

The beauty of Middle Earth
Visually, the game looks pristine and practically shines at its best. The opening movie is so well done that the characters look like their actor counterparts, and Gollum is just as creepy as he is in the films. There’s a definite drop in quality between those scenes and scenes in-game, though, where the game looks nice but nowhere near as good.

Still, the characters are all recognizable.  Their armour is similar to how it was in the films, their faces recall the appearance of the actors, and the worlds look good. It is simply somewhat jarring to observe the differences between the stellar quality of the opening sequence and the lesser quality of the game itself.

Drums in the Deep
Howard Shore has done a fantastic job with the original trilogy’s soundtrack and the new Hobbit movie; and the music in the game is similar to the intense and powerful quality of Shore’s music. The sounds are familiar and bring back the same feelings that were present watching the films, recalling the epic quality of the Battle for Helm’s Deep and other big moments in the films.

Of course, the music is not the same, and while they sound similar, it’s not quite as good.  Still, the fact that the music was designed to fit the mood and recall the movies is nice, even if the quality is not quite as high as the original soundtracks.

An alliance of elves and men
Most of the game is really about multiplayer, given that it’s much more fun and challenging to fight other human beings than it is the computer. Gameplay is mostly the same in both situations, but the difficultly level is certainly higher.

Jumping into multiplayer first is not recommended; players should try levelling up their characters first, for enemy combatants are sure to have done so. Once the player feels their chosen character is ready, multiplayer is a fun experience. Matches are limited to twenty minutes (unless the player specifies otherwise) so the players don’t get caught in games which go on for far too long. 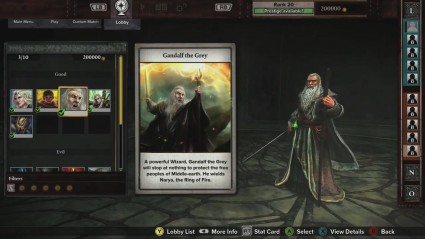 Each match is five against five, with ‘good guy’ characters like Gandalf and Legolas fighting against bad guys like Sauron and the Witch-king of Angmar. During the twenty-minute period, gamers fight to destroy enemy players, who respawn and come back for more, take over enemy locations, and improve upon their own locations with upgrades.

The most obnoxious thing about multiplayer (and the game in general) is the lag and loading times for matches. I was waiting a good five minutes or more each time I started a game.

At the end of all things
It’s perhaps not a stellar, must-play title, but Guardians of Middle Earth was fun. An interesting experiment with the added bonus of giving those desperately in love with Tolkien’s creations a bit more to chew on. This game may not be a home run, but it’s at least worth at shot.