If this really is the last year of current gen consoles, then they’re definitely going to go out in a zombie-fuelled Resident Evil style KABOOM! With Operation Racoon City out in March, and the just-announced RE6 coming to us in November, later this month we’ve also got the series first foray into 3D with the brand new Revelations on 3DS.

With gamers being rather impatient creatures, and it still being a week until launch, the lovely lot at Capcom and Nintendo have given us a little something to be going on with. A demo.

The first thing that really struck me was the quality of the graphics. Simply put, this is the best looking handheld Resident Evil game to date, with the quality on par with Res 4 at the very least. Equally striking is the 3D. Maxed out, Revelations seems to boast some of the best 3D on any third-party 3DS game. However, for those easily nauseated, there is a real sense of control over the strength of the 3D, so if you want to dial it down but still get the effect, Revelations completely compensates for that.

The 3D also seems to add a lot to the game. Creature’s tentacles and pincers lash out and strike as if intending to pierce your eyeballs. The rooms within the game also seem more alive and animate than ever, the 3D giving life to the environments in Res as has never been done before.

The gameplay is very befitting of the series, even without the Circle Pad. A quick tap of A will allow you to heal with a green herb, quick tapping X and Jill starts stabbing out with her knife, assigning weapons with the D Pad is also very fluid and adjusts well to the action on-screen. Revelations also introduces a new addition to the series, the Supply Scanner, which allows you to scan your environment to find hidden items. Even aiming with your gun seems logical, where it can be done either over the shoulder or from a first person perspective by holding RT.

That being said, I can certainly see the advantages to having the Circle Pad attachment. Pressing RT to aim, and then Y to shoot is awkward, and misplaced. Unfortunately, with shooting being a big part of Res, the combination of those buttons throughout the course of the game is destined to become annoying before long. There are three custom-made control configurations to choose from, with Type C seemingly best suited for gunfire action, enabling you to hold LT to aim then RT to fire. Unfortunately, that also makes other combinations of buttons slightly awkward, and forces you to adjust the camera manually, which really isn’t that ideal in critical moments. 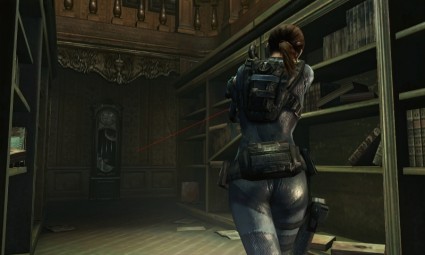 Jill is a bit wary of this Grandfather Clock...

Essentially, while I’m not saying Revelations is unplayable without the Circle Pad, I do think the game will be a lot less frustrating, and progress will feel much more comfortable for the player.

The wonderful thing about Revelations is that it doesn’t feel dumbed down or arcadified, but an actual, honest to goodness Resident Evil game, made specifically for Nintendo’s handheld. Your inventory is handled via the touchscreen, and in the demo you’ve got two different gun-types to experiment with (Pistol and Shotgun). The enemies, while new, feel very much a part of the lore of the franchise and not rehashed textures slapped in front of you. What’s more, there actually seems to be a legible story piecing it all together.

While the demo doesn’t go into much detail, players are cast as Jill Valentine who wakes up on a Ghost Ship feeling a little lost and woozy, yet still in communication with her partner, Parker. Jill traipses through the creepy ghost ship to reunite with her partner, but encounters unwelcome attention along the way.

The demo does everything you would expect it to. It manages to get you even more excited for the game, and will completely convince you that Capcom have created another quality instalment in the Resident Evil series.

With January being a quiet month for gaming, Revelations was already the month’s most anticipated game, but because this demonstration does so many things right, it completely convinces you that Nintendo’s handheld is about to hit its stride, and the best of it isn’t all coming from Castle Nintendo.