There was a lot of surprise when Ubisoft announced that a third Assassins Creed game would feature Ezio in the lead-role. Many were expecting a whole new Creed, set in a different timeline with a brand new protagonist at the helm. Instead, we get an aged Ezio walking a path of self-discovery, following in the footsteps of Altair.

Regardless of what you may think of Ubisoft’s decision to once again revisit familiar ground, after watching the developer session, I can tell you one thing. Revelations will change the way Assassin’s Creed is played, forever…

The game is set many years after Brotherhood and Ezio is a lot older. Interestingly, however, he is still very spritely for his age, so don’t get to thinking he’s anything like Old Snake in MGS4; he’s not. In some ways, this doesn’t sit right with me as age inevitably deteriorates the body, yet it doesn’t seem to have affected Ezio at all as he still flies across the rooftops without a care in the world. The developers did say that there will be references to Ezio’s age in cut-scenes, but it would not affect the gameplay.

Without even getting hands-on with Revelations single-player, I think Ubisoft missed a golden opportunity in not doing this. I think a big part of the empathy I felt for Snake in MGS4 came down to his age, and realising I could no longer do some of the things I had taken for granted in previous instalments. However, Ubisoft seem to be taking a ‘wise-assassin’ approach with Old Ezio, making him seem a lot more focused and less flamboyant in Revelations. It’s another angle that can work, I guess, we’ll have to wait and see…

Anyway, I’m ranting. Revelations seems to be much darker in style than previous instalments, and yet, for the first time, Ezio is not on a mission for revenge. This is all about self-discovery and exploring his heritage.

As you know by now, the game is as much about Altair as it is Ezio. When Ezio kills a prime antagonist in his quest, he will find one of Altair’s Library of Masyaf. These are relics which will unlock some of the memories of the original protagonist of Assassin’s Creed. Oh, and in case you wondering, yes, you will be fully in control of Altair’s movements during these memory sequences. Even more interesting is that the memories are very focused and story-driven, so it does introduce a unique addition to the series.

That’s not the only big change that Ubisoft are giving us. For the first time in the series, players will be able to craft and utilise bombs! The bombs come under three categories, Diversion, Tactical or Lethal. As Ezio moves about the world, he will happen upon bomb stations, which will enable him to craft these different bomb types with ingredients he picks up. So, for example, Ezio will be able to kill enemies with a straight up explosion, or lay trip mines that send a cloud of smoke bursting into the enemies face. 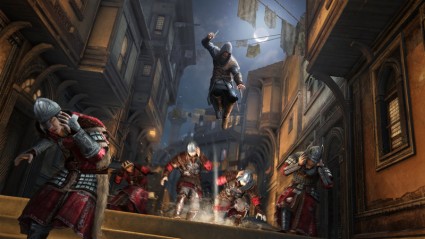 A concussion bomb in action!

According to Ubisoft, there will be over 300 combinations of bombs for players to experiment with. With such an enormous number, that also means that there will be a second weapon wheel at your disposal. So, you can select one primary weapon, whether it’s your hidden dagger or your sword, and one bomb from the secondary wheel.

Ezio will also be able to use a hookblade, which allows him to zipline between buildings. This will undoubtedly make the game much faster in pace, which seems even more ironic given my initial point about Ezio’s age.

Finally, the Eagle Vision has been upgraded and is now known as the Eagle Sense. With the upgrade, Ezio is now able to determine a target’s path, in addition to all of the regular features. This will make the job of tracking and isolating your target even easier.

As you can see, Revelations is going to be a very different type of game, not just in gameplay features, but in trying to string three timelines together at once, while bringing closure to Ezio’s story. Ubisoft also said that, more than ever, they’ve focused on making each of the four districts you play in very different from each other. The style and tone of each district will reflect the people inhabiting it, so there will be a real contrast between the poor and rich districts in Revelations.

Unfortunately, Ubisoft didn’t talk about the story-driven multiplayer aspect of Revelations, but when asked how Desmond’s story will pan out seeing as he is in a coma, they did reply and say that they’ve ‘worked out a very creative way to implement him into the story’.

They’re going to go all Inception on us, aren’t they?