505 Games came to E3 with their new game ‘Supremacy’. They were kind enough to get us into their demo theatre, and hopefully my preview lives up to expectations. So without further ado, here we go with ‘Supremacy’.

So, the first thing you need to understand about ‘Supremacy’ is that it is only 35% complete at this point. They have not started on the groundwork, emotions from people outside the ring, and it is still only the first render that we were able to see. The scary thing is, it’s already looking extremely fun. At 35% done, it seemed like if I had been able to pick up that controller and play, I’d be having enough fun to warrant a purchase.

The first match we saw was in an underground sort of street-fighting match. There were spectators, people betting on chicken fights, and others sitting at the bar. 505 informed us that your objective was to climb up from a small street fighter to a big time fighter. This proved true when we were shown one of the later rings in the game; the ‘Supremacy’ ring. This ring featured a more vibrant environment, and all of the differences that come with rags-to-riches in general.

The viscerality of this game is really quite brutal. It’s like Mortal Kombat meets UFC. It’s not too over the top, but it’s just enough to make you wince. For instance, when your fighter gets kicked on the knee one too many times, his entire leg bends in a slowmotion takedown. This leaves him down on the ground unable to stand back up again and continue fighting. The game is fast-paced and exhilirating, featuring a very low response time with a steady 60 frames per second.

Now, 505 have told us that they are trying to really focus on making the different fighting styles extremely unique. They said that they want the weaknesses and the strengths of each individual style to show through. I saw Muay Thai vs Brazilian Jiu Jitsu, and because 505 has not begun work on the ground aspect of the game, you could obviously see that the Muay Thai fighter was dominating the Jiu Jitsu fighter simply because Jiu Jitsu is a ground-based style.

MMA Supremacy is looking like it could be a great fighter. Multiple arenas, online play, and the drive to separate itself from names like Undisputed are sure to make this game a unique, and fun experience. 505 games have also told us that the lead platform is Playstation 3, but it will be heading to the 360 as well. Great guys, the lot of them, and I hope that Supremacy is every bit as awesome as I’m touting it to be. 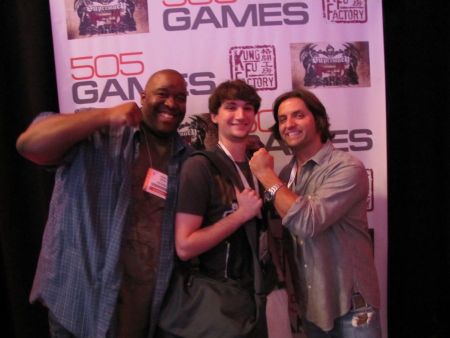