Hunted: The Demon’s Forge is another title coming from Bethesda Softworks. Set in a medeival time, you play as one of two characters: A fetching elf archer, or a skinhead brute of a warrior. Let me start off by saying, that this game is looking ridiculous! No, I don’t mean stupid ridiculous, I mean awesome ridiculous.

Read on to find out more!

The demo started us off in a rain-forest looking environment, which was absolutely beautiful. This game isn’t even finished yet and it made my jaw drop. The game also features a pretty nice motion blur effect while sprinting or turning, and having that mixed with the environment was just amazing. There was a certain set-piece that caught my eye the most, and I’m quite sad that we couldn’t get a picture of this for you. We had climbed to the top of the mountain we were on, and came across a small shrine-looking area. Here, the mountain came to a stop, and the view was just spectacular.

The gameplay is what really impressed me though, and after saying so much about the graphics in my previous paragraph I’m questioning my ability to find the right words for it. There are slight puzzle elements to the game, in both combat and adventure. For instance, in combat the elven archer can shoot an enemy with an “Ice Arrow”. This freezes them, and lets our warrior friend smash them to pieces. In adventure, she can shoot an exploding plant to clear the way. 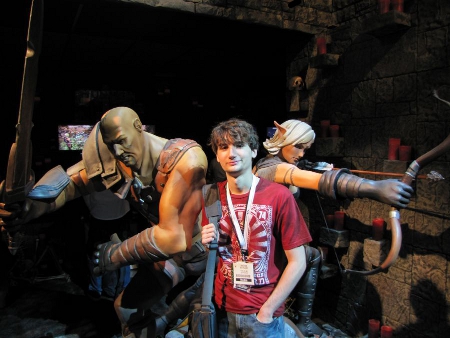 Me standing with a replica of the two characters from 'Hunted'. (Worst picture of me ever!)

Now, I’ll be frank. I don’t like either entry into the Gears of War franchise so far (I’m getting to the point). It seems overly antagonistic, bloody, and brutish. ‘Hunted’ plays very much like Gears, and without some of the visceral styling that accompanies it. It’s third person, and yes, your character accumulates blood on his face and armor. It does it with grace th0ugh, something ‘Gears’ has not achieved yet. The actions are done so as it feels realistic. Arrows hit with deadly force, and swords fell with blinding speed.

While the entirety of the game’s plot was not revealed during our level-one playthrough, we got the feeling the game was going to be centered around a mystery. This in turn would lead me to believe that the general gist of the game is to quest and solve this mystery.

While there is not much information on ‘Hunted’ from a media standpoint, Bethesda did tell me that they will be trying to market the ever-living hell out of it soon enough. Our demo specialist told us that it has been one of their more obscure titles, and that they want more people to know about it. So, look for ‘Hunted: The Demon’s Forge’, in stores (tentatively) later this year!