Ever wondered where all of those wacky, crazy and insane ideas in Borderlands come from? Well, wonder no more, as they’re contained in the head of Mr Anthony Burch, lead writer of Borderlands 2, and at Gamescom, I got the chance to chat with him.

From Claptrap to Handsome Jack, I delved a little bit deeper into his inner psyche.

Q. How much have you learned from Borderlands 1 in terms of fan feedback and the original game’s development cycle? What would you say are some of the marked improvements in Borderlands 2?

“There were two things we knew for certain going in. First, the story. A lot of people felt that in Borderlands 1 there wasn’t a lot of context for their actions, and the story was mostly a gloss of text of people chatting at you. We’ve changed and hopefully improved that.

Secondly, the environments. People felt Pandora was just this massive barren desert. We’re saying ‘no, there’s more to it than that’. So this time we’ve gone out of our way to introduce a bunch of different environments in Borderlands 2 which will hopefully keep things feeling fresh.”

Q: I played Borderlands 1 in Split-Screen for hours with my partner, however one thing we found disappointing is the lack of split-screen online multiplayer. Has that changed in Borderlands 2?

“Definitely. Split-screen will be playable online this time around. “ 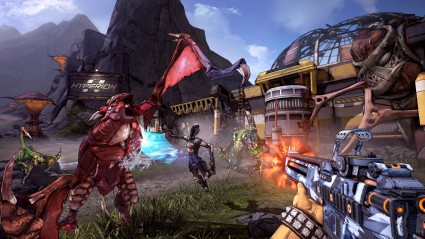 Q: Earlier on, I saw an end-game raid boss known as Terrormorphus who will only be available once players complete the game. Terrormorphus will take a four person team around 10 minutes to down, but he drops ultra rare loot as a reward. Do you think you’ll continue to add raid bosses through patch updates or DLC overtime?

“You know, we’ll see what happens. I think it all depends on how people react to Terrormorphus. There’s nothing set in stone at this point.”

Q: There was some controversy in the press surrounding Gage, the Mechromancer character. How would you explain the character to those who say she’s been introduced to ‘simplify the experience’ and that you’ve ‘created a girlfriend mode’?

“The Mechromancer is a great, interesting class. She has three trees and we’ve only talked about one in detail. The character serves dual-purposes. There is a tree tailored for those not used to playing live, FPS games. If they shoot an enemy and miss, the bullets will bounce, ricochet and still have a chance to hurt enemies.

However, elements of that can still be incorporated into ‘hardcore’ play. That tree is designed for newcomers as well as the moderately hardcore. However, there is another tree which we haven’t talked about yet designed for the ‘super hardcore’. This is a high risk, high reward talent tree and something you’ve never seen from a Borderlands character before.

In short, the Mechromancer is a character that hits a lot of different points. She has a tree that can benefit newcomers, but she also looks after the bad-ass hardcore crazy contingent. Combining skills across trees could potentially create the best character you’ve ever played in Borderlands.”

Q: Borderlands is only scheduled for PS3, Xbox 360 and PC. Are you considering other formats? For instance, could Borderlands work on Vita?

“Never say never.  We’re always thinking about that kind of stuff. I’ve seen the things Vita can do. Borderlands could work well on handheld. Of course, that’s not a confirmation of anything.” 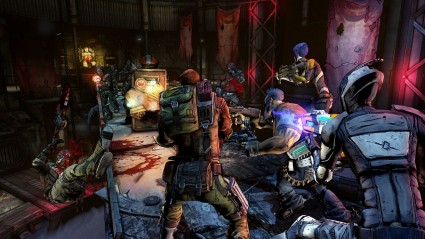 Borderlands does the graphic

Q: *laughs* Not at all. Just interested. Borderlands was a risk for 2K initially. It was a new IP, introducing a lot of new ideas  and there was no certainty about it. How do you feel about the franchise now, especially since Borderlands 2 is now 2K’s most pre-ordered game? Could you see the franchise continuing?

“Well, put it this way. Borderlands 2 doesn’t end with Pandora exploding and everyone dying. Sure, it could keep going. That said, eluding to your earlier question, we are going to create a rounded, narrative arc. There will be a beginning, middle and end, and all loose ends will get tied up. We’re going to bring closure to the story this time.”

Q: There was a real open-ended feel to Borderlands, in that it just kind of ended. It was almost as if you were preparing us for something even back then.

“For sure, but this time, there’s definitely a clearer ending.”

“Torque-Shotguns. The awesome thing about Torque weapons is that they fire explosive rounds. Shoot the ground in front of you, or charge into enemies, and you’ll be playing around in their blood and gibs.”

Q: You have lots of gun combinations in the game, I’m sure it’s been a real pleasure for you to experiment, and you probably haven’t even seen everything that’s possible?

“Oh, totally. Absolutely not. There is so much variety. You know, the mark of a great gun is one that changes the layout of play. I love playing with Zero the Assassin and backstabbing guys with a shotgun, or getting into deception, and throwing grenades with the teetor gun.

That doesn’t even break deception, and so you can plant them around enemies, then break deception, fire your gun, and then you’ve also got grenades blowing up all around you, taking enemies down left and right, as well as the bullets in the gun you’re currently firing. That’s what makes Borderlands 2 so special. No combat feels the same because of the diversity of guns. It’s awesome”

Q: With all of these possibilities, do you think you would allow your community to share their combination ideas with each other in the future?

“We’re always listening to the Borderlands community. That’s why we created such a wide arsenal in the first place. Whatever they say goes, and we’d be stupid not to listen to that.”

Q. I appreciate you taking the time to chat with me. I wish you every success with the game.

Borderlands 2 releases next week. Be sure to check out our full review on September 18th!