I run through the streets of Akihabara with my fighting partner in tow, looking for an Otaku who sent me a mission request via my smartphone. He wants a cosplay costume from a highly prolific designer who’s gone off the radar. It’s only a side mission, but the payout is pretty good and it means I can purchase a large rolled-up poster I had my eye on to use as a weapon. After running circles around the city talking to various NPCs, I locate the designer, currently being harassed by a group of young misfits with similar interests in mind. After fighting off the mob, the designer agrees to make a cosplay to deliver back to the Otaku, and I can then purchase my poster.

It’s not long after that I sell the poster after finding an electric guitar with a higher attack rating that one of the many grunts dropped, disregarding the twenty minutes of mindless leg-work I just put myself through.

This sums up my time with Akiba’s Trip: Undead & Undressed.

Akiba’s Trip takes great pride in its references to Japanese culture – more specifically, Anime and Manga culture. The city of Akihabara, in which the game is set, is based on a real city in Japan, renowned for its colourful, Otaku-centric lifestyle, and Akiba’s Trip expends a lot of its energy in faithfully recreating the ‘electric city’.

Even the in-game shops are based on actual shops in Akihabara and encourages you to visit in real-life, as thanks for the stores appearing in the game. No doubt, there is a deep appreciation for the setting. 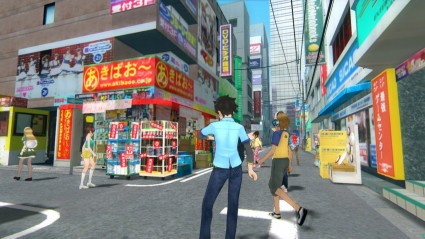 While Akiba’s Trip shows deep affection for its source material, it also has its… quirks. The animated, cinematic opening introduces you to the game world through shots of the city and fight scenes where the characters tear off each other’s clothing. With a subtitle like Undead & Undressed, I was not sure what I was preparing myself for. I can’t say it was this.

Akiba’s Trip (or Akiba Strip as it clearly wants us to call it) is a Japanese beat-em-up that requires you to strip the clothes of enemies in order to defeat them. There is a perfectly logical reason for this; the enemies in question (and the player character) are vampires.

Well, sort of. The protagonist is tricked into undertaking medical experiments by a shady pharmaceutical company that turns him – along with many others – into a ‘synthister’; a synthetically hybridised human with super strength. The trade-off is a weakness to sunlight once the skin is exposed (hence the focus on the removal of clothing). A mysterious girl named Shizuku then rescues the main character from the clutches of the evil corporation and they go about recruiting friends from their local gaming bar, who help in fighting the all-consuming nature of the evil synthisters.

The story feels slightly contrived, only being there in the first place solely to justify the context of the core gameplay, which has some pretty questionable motifs to begin with. It becomes harder to justify forcibly removing clothes from opponents when they aren’t synthisters. When a synthister has their clothes removed, they evaporate into an explosion of black smoke. When anyone else has their clothes removed (including your fighting partners), they just run away from the vicinity, wailing out whilst trying to cover their exposed bodies. This feels less like a fight against the forces of evil, and more like a gratuitous display of sexual harassment. A rather unsettling thought to say the least. 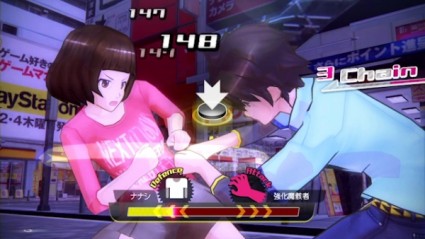 “WHY WON’T YOUR CLOTHES COME OFF?” is something you will probably scream whilst playing this. On an unrelated note, avoid playing this on public transport.

The fighting mechanics revolve around three central attack moves; high attacks, low attacks, and core attacks. When the attacked area is covered by clothing (headgear, upper wear, and lower wear) then damage is inflicted, and each article of clothing has its own health bar. The enemy – and you – can be defeated when all three of these areas have been fully exposed.

It’s an interesting twist on a tired genre, and makes it necessary for attacks to be coordinated around a specific area rather than the usual barrage of button mashing that can be easily implemented by the less-than-skilled. The issue with the fighting gameplay comes when there is an overwhelming enemy presence in the area, and to clarify, this is most of the time.

If you’re forced into a corner, then it becomes incredibly hard to escape the confines as you are knocked down repeatedly in rapid succession, having your clothes removed from all directions. When this happens, all that can be done is to accept your fate and make your peace, then try avoiding the same scenario when you restart the fight. This feels like a cheap loss, rather than a lack of ability on your own part. This happened on quite a regular occurrence and it was frustrating to say the least.

Considering the majority of the game is centred on the fighting gameplay, there is little to do outside of the main story and side missions, apart from purchasing upgrades for your equipment from the various vendors decorated around the city. Whilst Akiba’s Trip is a faithful recreation of Akihabara, the whole city feels more like a ghost-town down than a sprawling metropolis. Each street feels like a series of narrow, brightly lit hallways that only serve as a means from A to B, punctuated by the presence of overly long loading screens.

What it is trying to load is beyond me, as there are little more than five NPCs when walking around at any given moment, and the draw distance is laughable as some characters would often pop in about five feet from my immediate vicinity. Akiba’s Trip also suffers from a terrible drop in frame-rate when a large number of enemies appear on screen, which slows the pace of the frantic gameplay down tremendously.

Considering I played this on a Playstation Vita, I wasn’t expecting the most technologically demanding game, but I was expecting to explore a vast city without having to wait ten seconds to render one street and a sleeping bum.

Akiba’s Trip‘s Japanese voice-overs are surprisingly enjoyable, which I can’t say for the English counterpart. I listened to both before deciding to stick with the Japanese version in order to get a feel for the authenticity of the Japanese city, as the English voice acting felt very hammy in comparison. If you are a fan of anime, then this will inevitably bring up the ‘Dub versus Sub’ debate, but at least you have the option to choose. 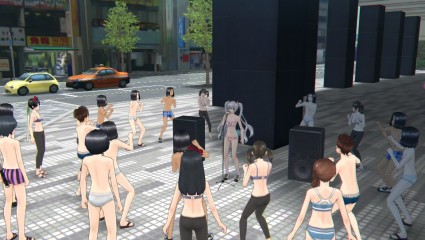 I’m told this is not an uncommon sight on the streets of Akihabara.

It’s getting hot in here…

Akiba’s Trip feels like an old painting that hasn’t been restored. Its faithful reproduction of one of Japan’s most well known cities is beautiful and inspired on the surface, but with closer inspection the cracks start to appear through its lacklustre, repetitive gameplay and shallow subject matter. As I ran around Akihabara with Shizuku, she tells me ‘this city is really beautiful…’ which was unfortunately lost to me as the beauty of the moment served little more than a backdrop for the serial disrobing of its citizens. If you are a die-hard fan of the series, or a fan of Otaku-culture in general, then you may find some worth in this title, but not in the gameplay.

Akiba’s Trip would have been much more enjoyable if the gameplay and scope could have been widened, even if only marginally to recapture the essence of the setting and offer an experience worthy of its heritage in video-game culture.