The French Revolution was one of the most notorious and volatile periods of history that ushered in a new age of democracy and socialist thought. It was rife with famine, disease and ghostly spectres that passed freely through walls and floors.

This is the 18th Century Paris that Assassin’s Creed: Unity sought to create. Otherwise, I can’t think of any other logical explanation as to why Ubisoft would ever want to retroactively adjust the last detail in the retelling of the famous setting.

Jokes aside, Assassin’s Creed: Unity had a rocky start to say the least. It was wrought with game breaking bugs, visual glitches and a drop in frame rate that made PC gamers everywhere cry out in anguish. We lowly console gamers had a rotten taste left in our collective mouths too, when Ubisoft announced the game would be locked at 30 frames per second on the next gen systems with a resolution of 900 pixels. It was a strong blow and hard to understand the justification when it had been touted as the ‘definitive next-gen experience’.

With that in mind, Ubisoft employees have spent their time since Unity’s release with their heads dragged along the ground, presumably to have the position already assumed when bowing in shame for being just the worst. Something happened however, halfway through reviewing this game… A four gigabyte patch.

With that in mind, I made my best efforts to revaluate my jaded view of Unity to see if any diamonds could be found in the rough.

Let’s make a quick overview of the technical aspects to see if the patch made any noticeable difference. The framerate itself is a lot smoother than it previously was pre-patch, which is a start. There are however noticeable drops in parts of Paris that receive higher footfall (see: future tourist traps). Whilst some of the most recognisable spots look stunning from high vantage points, the cracks do start to show when making your way through the vast swathes of people.

Is any of this game-breaking though? Not particularly. When looking at this through the context of the story, it actually starts to make sense. Unity sets itself out in a similar way to Black Flag, meaning that rather than being set inside the Animus like other Assassin’s Creed games, this one is set up as a video-game within a video-game. Instead of being a tester at Abstergo Entertainment, you are end user of the final product. The ‘game’ is then hacked by the assassins, and it is up to you to help them by completing the memory sequences of the new protagonist Arno Dorian to help their cause.

It puts the many hiccups into perspective; an ominous illuminati-esque organisation that manufactures video-games as a method of data-mining sensitive information in turn for power and profit are being ‘hacked’ by a small group of freedom fighters.

Art imitating life, vice-versa and all that, I suppose… 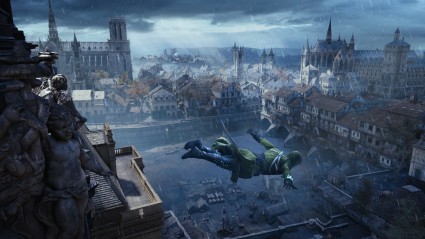 The views are typically gorgeous…

How does Unity  compare to the rest of the franchise? Its predecessor, Black Flag, was a fantastic game with one major flaw; the story missions were repetitive and dragged the free-roaming of the Caribbean down (You played as a pirate. The last thing you should feel is restricted). Unity doesn’t so much suffer the same problem as the polar opposite. I found myself enjoying the more open approach to completing missions (with optional objectives to make the escape cleaner and quicker) and less so for the vast collection of side-quests. Some were entertaining, however, with the historical events and characters being an entertaining outing, helping to flesh out the world of Revolutionary France outside of the main story.

The free-running gameplay has been some of the most fluid and natural in the series yet. I experienced no issues climbing up and down large structures as movement felt more natural in the city of Paris than it ever has. Less like a system of interlocking rails, predetermining my jumping arch as I furiously find myself grabbing a ledge that was next to the door I was trying to pass through.

The animation also deserves a mention. The heavy movements made by Arno as he traverses over buildings looks and feels natural, he feels more like a real person with real weight as opposed to a proto-human with the world’s most robust ankle joints.

Of course, one of the most heavily touted features was the new cooperative multiplayer, and relying on the online community to help you perform complex manoeuvres around an intricate landscape works just as well as it sounds. I dipped into some of the co-op missions that were decorated around Paris and I can tell you, they were nothing like the E3 trailer, unless the trailer itself contained a scene where two master assassins awkwardly try to scramble through the same window as they race for their target. Luckily however, these missions were purely optional so I didn’t have to dwell on them for too long. 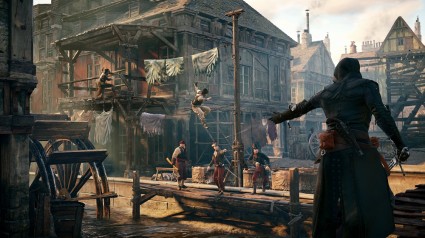 Co-op is about as much fun as I expected. Namely, not much.

While I did enjoy the main gameplay, there were several aspects of it that I found quite limiting. As with most Assassin’s Creed games, the in-world currency allows you to purchase upgrades, be it your safehouse or your impressive arsenal. Previous entries had the problem of a broken economy as soon as you could purchase upgrades that generated large sums of money, making things fairly easy around the middle-mark. Unity however, has the opposite problem.

I struggled to come by any substantial amounts of money in-game that would allow me to purchase the necessary upgrades. While I appreciated the added difficulty, I could only feel that this was not a reason as to why this was the case, especially when I was given the opportunity to buy the exact same items for real-world money as an alternative for my time and efforts. Let them eat cake, indeed.

I love Assassin’s Creed as a series; its story has been consistently engaging and I genuinely feel like I am benefiting from the historical facts and figures throughout (I am a huge history nerd, which is what enticed me to the series in the first place). The issue I have with Unity is the bitter-sweet notion that this isn’t just another way of filling an annual balance sheet like other series do; each entry has felt like a meaningful addition. The world and the lore are so rich with detail, that it’s hard to justify the draw-ins when the issues remain so prevalent.

Would I recommend it for its gameplay? Absolutely. Ubisoft have fixed a lot of the mechanics that made Assassin’s Creed feel clunky. For the technical/monetary side of things? Most likely not. If you can pick this up in a few months’ time (possibly with the upcoming Dead Kings expansion pack) with a cheaper price tag, by all means, you should, if only to keep up with the increasingly complicated story that would make even Metal Gear Solid scratch its head.