Capcom gave us a lot of reasons to be happy during the days of the Playstation 2. From Resident Evil 4 to Okami, and a little series called Devil May Cry.

The series is renowned for its over the top penchant for blood, violence and destruction, and remains a beloved classic among gamers the world over. Yet, it is with trepidation many look toward the Ninja Theory Series Reboot later this year. With big lore changes, gameplay style and art direction, the new DMC has caused a huge divide among its potential audiences.

Adding further fuel to the fire, Capcom have also decided to re-release the games that made the series famous, leaving us with two very important questions.

Are these games still any good? If they are, will these HD reminders serve as an unintended death sentence for Ninja Theory’s forthcoming efforts?

DMC HD Collection gives us Devil May Cry 1, 2 and Devil May Cry 3: Special Edition. Each title has seen graphical and sound benefits, but the gameplay and story remain wholly untouched. The series follows Dante, son of the legendary warrior Sparda, and his quest to defeat hellish ghouls and otherworldly demons that bring their afflictions to Earth.

The series timeline does not work in chronological series order; in fact, Devil May Cry 3 is the series’ true origin story. DMC3 finds Dante sat eating pizza while awaiting customers in his ‘as yet’ unnamed business, when, suddenly, a dark messenger enters the establishment bearing a message from Dante’s brother, Vergil. Suddenly the earth shakes, a large tower spirals from out of the ground, and Dante is attacked by waves of demon-forces. After defeating them (top-less, I may hasten to add), Dante goes in pursuit of his brother and intends to challenge him at the tower’s summit.

DMC 1 and 2 follow further stories of Dante’s adventures as he faces lava-infused Spiders and terrifying hawk creatures, and embrace the series-bred insanity in equal measure. Yet, all stories are focused on Dante, his phenomenal strength and care-free attitude. Oh, and two little guns called Ebony and Ivory. 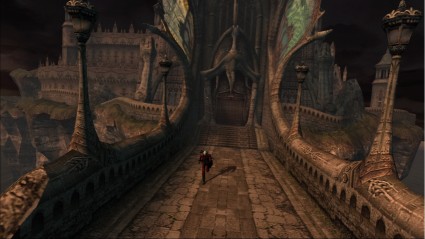 The environments are still stunning!

Tears of a clown
Probably the most frustrating thing in this whole collection is having to restart it to access different games. There’s no option in the menus to gain easy access from DMC 1 to DMC 2. It’s a jump to the dash job, and then you’re forced to reload your game. Pretty backward if you ask me.

Also, the problem with re-releasing games from Playstation 2 is that many of the camera frustrations and control hiccups we’ve moved away from make an unwelcome return. Some of the camera issues, in DMC1 and 2 particularly, completely obstruct your view, making it nigh on impossible to see where you are and where you need to go. You’ll also find some of the button mapping very dated and cumbersome to control.

However, the hack-n-slash tempo of the games still enthuses you with adrenaline, the level-design is expertly interwoven between focused missions, and the difficulty is completely suited to newbies, as well as series-veterans. Devil May Cry still feels like a very relevant, important third-person action game that still exposes more flaws in recent games than it probably should.

Devil May Cry’s action sees you wielding a sword bigger than your body, and an arsenal of guns, varying from pistols to grenade launchers. You build up combos as you beat down your enemies, and can combine the attacks for added-effect. You can even upgrade your weapons for further actions to use in battle. This format helps keep the games feeling very fresh, and give you a true sensation of progress as you pass through each mission.

A major series staple is your preparation before each mission. In DMC 1, this starts out fairly low-key where you can gain access to a shop where you can spend collected red-souls. You can simply purchase an extra continue or life-gems, or you can purchase upgrades for various weapons you collect in the game.

Oddly, there is no opportunity to develop available prior to missions in DMC 2, yet the format is greatly evolved in DMC3 to a customise option, where you can change your fighting stance, equipment, learn new abilities and increase your gun power.

You’re graded on each mission based your performance, time-taken, damage sustained and combos used, and then given a Devil Hunter Rank at the end of it. As you’ll probably be well aware, it’s all about the achieving the mighty S Rank!

DMC is world-renowned for its ludicrous violence, boss battles, brutality and wit. Thankfully, all of it remains in-tact in this HD Collection, and despite a few control niggles, an over-abundance of pad-vibration, and inconsiderate camera-work, this is still a fuck-ton of fun! 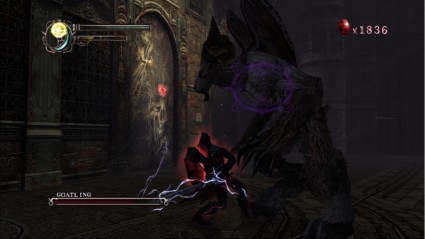 These are still the same great games you remember!

Legendary warrior
The Devil May Cry titles have always appeared artistically elegant, and ahead of their time. The set pieces are grandiose, and magnificently drawn. The action is always fast, furious and vibrant. The skies are drowned out by large, spiralling cathedrals, lovely tiled rooftops, and hellish capsules, brimming with fire. DMC makes a lot of the environment it is set against, and that is as much of the focus as the action on-screen. Capcom truly make you pay attention to your environment, and you’ll never just think of it as pixels stuck in the background

The action always feels very smooth in this collection, though in DMC 1 and 2, I did experience some slow-down, and frame rate degradation. On one occasion, the graphics even corrupted completely, and I just got a red screen with model outlines fighting. That was a one-off, however, and entirely forgivable.

Despite the HD spit and polish however, these are easily discerned as last-gen games, and no amount of gloss, anti-aliasing or resolution increase is going to change that. In fact, the HD upgrade makes some characters look overly peculiar (Trish, in particular) and completely unsuited to the engine.

The cut-scenes suffer the most for this upgrade, however, and still look very grainy and blocky. In DMC 1 and 2, the cut-scenes don’t even fill the screen. This is probably for the best though, as stretching these out would probably do more harm than good.

Still, the epic boss battles and awesome move-sets light your TV set up like a Christmas tree, and suck you straight into the action. The DMC series still looks great, and feels very comfortable on your current-gen system of choice.

Blood and thunder
Ludicrously, the HD Collection exposes weird flaws in each game’s sound. For example, the sound bytes in DMC 2 sound awful in comparison to DMC1. The grunts and groaning in combat sound bitty and screechy flying out of your speakers, and bereft of the crystal sharp quality we’ve come to appreciate from High Definition.

Yet, the hard-hitting metal soundtrack, while it chortles along quite quietly, still seems to blow your socks-off with its hard-hitting integrity. A perfect accompaniment to the bloody brutality blotching your screen. 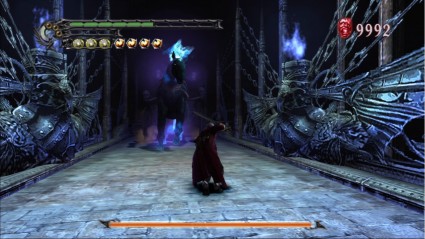 Dante kicks all kinds of ass.

A decade on…
This is an extremely fulfilling, bargain-priced package, that will quench the thirst of retro-enthusiasts and action die-hards. Don’t worry, Devil May Cry has still got it!

Is reminding gamers of this amazing series a wise decision before rebooting the whole thing with a parallel universe? Probably not. Yet it does at least show you why we’re still talking about Devil May Cry in 2012, and it gives newcomers a chance to see what all the fuss is about.

DMC HD Collection is a well-upgraded, fun-to-play, long-life package, and the best thing Capcom have released so far, this year.