The gaming community these days can get very vocal when touching on DLC practices, which have us wrapped around a selling point spiral when purchasing any new game. It’s now the norm that the question on every gamer’s lips when purchasing a game is if it will feature DLC or not.

It wasn’t so long ago, back in the late 80’s through to the 90’s, where DLC was not even heard of. ‘Retro gaming’, as they now call it, would always present us gamers with the knowledge that the game was a completed article and a one-off money transaction would be all it took to make one satisfied. While I find myself in the middle of the question: ‘is DLC good or bad?’, I can safely say that I have found an answer. DLC Quest from Going Loud Studios brings a comedic adventure that mocks the video-game industry and their exploitation of DLC.

The Good, the Bad and the McGuffin

‘Defeat the bad guy, save the world and get the girl’ is a pretty straight-forward goal in any game, but DLC Quest introduces a much lighter attitude to storyline and action. A bad guy wouldn’t be a bad guy if he wasn’t up to his old tricks. Not only has he kidnapped Princess McGuffin, the love of your life, but he has also murdered your uncle and may even have peed in the town’s water supply.

Left alone to your own devices after witnessing the love of your life Princess McGuffin being kidnapped by the bad guy (who looks very much like fictional character Fu Manchu), you, or ‘Player’ as you are known by, are left with a daunting task to rescue McGuffin from the clutches of evil. 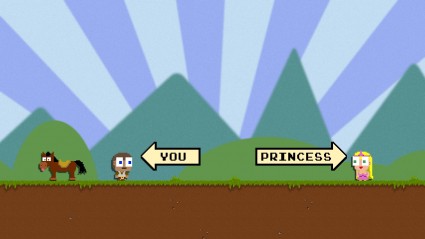 The lovers, minus the horse

Retro is back!
Who said retro gaming was dead? Not me; DLC quest is a 2D platformer with light puzzle-solving activities that will not only make you test your parkour skills, but will also make you remember the good old days of Mario, Rainbow Island and Alex the Kid.

Now here comes the twist to this story. Starting off in this bizarre and comedic world you will find most common features to any game disabled. Currency, the big player in the storyline, is what needs to be collected to evolve the game. Not only do you have no sound or animation when the game begins, but you can’t even jump or walk left. With all these abilities being unlockable luxuries, you must collect floating coins in and around the environment. When you have enough money, you talk to a village merchant to buy necessary abilities, or ‘DLC Packs’, to make DLC Quest that little more adaptable.

So you’re stuck at a certain part of the level and you’re thinking to yourself, ‘I should be able to travel through this forest’? Then check with the merchant, because more than likely you haven’t purchased the Map Pack; absolutely comedy genius. Once you start unlocking all of the DLCs you will find that navigating through the level is one massive barrel of humour. Meeting NPCs that will quote ‘Hi, I don’t have anything relevant to say’, or my favourite quote, ‘I’m a filler NPC; I have nothing to contribute’, keeps the game running on a Monty Python-like journey.

This game is simply comedy in a nutshell from start to finish. I wish I could carry on with the comedic quotes and events and go into depth explaining all of the DLC packs which can be unlocked, but I wouldn’t want to spoil it for you.

Just like pretty much any retro game, DLC Quest is easy to pick up. The smooth game physics are well constructed and polished, and the jumping and movement are a well-balanced act that will avoid the frustration that some platform games can produce. This also goes hand in hand with the fact that you cannot die in DLC Quest, so even when you may think you’re falling to your death, you will soon realise that you’re safe after all.

DLC Quest provides a world of retro gaming that has been reborn by such games as Braid and Studio Re-Logic’s Terraria, with comedy genius that is a welcome bonus. 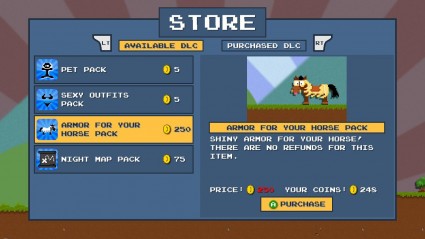 16-bit wonder
Graphically the game takes me back to my youth; it reminds me of Alex the Kid and other childhood platformers which were not highly graphically illustrated, but had a pleasing look and feel which was ever so entertaining. With an old-school level design, DLC Quest’s graphics are not overly stimulating to the eyes, but it doesn’t need to be. Sometimes the characters will look like cardboard cut-outs, but again this is by no means bad and keeps to the charming retro design.

Coins = sound
Sound in DLC Quest is not active until you purchase the DLC Sound Pack from the in-game merchant with your collectable coins. Once you have bought the Sound Pack, old-school music will rise from the grave, giving any retro gamer a visit from the past.

DLC Quest’s sound is not audibly appealing or memorable, and is accompanied with simple bleeps and blips that gamers who are accustomed to 16-bit consoles will either love or eventually want to shut up. Level sound will loop and probably eventually drive you insane, but thankfully there is plenty of text to read in place of voice-acting. If you’re looking for a fantastic orchestral score, then DLC Quest is not the game for you.

And the survey says…
I had barrels of fun with DLC Quest, but I can safely say that it’s not a game that will appeal to all audiences, especially ones that don’t remember the old style and sounds of 16-bit consoles. The completion time being a somewhat short forty minutes to an hour might have gamers asking themselves ‘have I wasted my money?’. Yet for the cheap price of this indie game and for the humour it produces, it almost pays for itself.

I really do hope DLC Quest brings out a much bigger sequel, or that a future game follows in its footsteps. DLC Quest has a vision of mocking exploitative DLC practices which no other title has yet sunk to, but the scary issue is that these might just be plausible for future game developers.