So you’re stuck in the wilderness, you have little resources to help you survive, you’re cold, hungry and insomnia could collect its toll if you don’t act fast. I know of one man that could help, and no, Bear Grylls is not that man.

Yes, I hear you breathe a sigh of relief; drinking one’s own urine and eating worms like they’re going out of fashion is not on the menu in this uncompromising wilderness survival game full of science and magic… and pigs?

What you talkin’ bout, Wilson?
Trapped in a world that has no boundaries when it comes to strange happenings and bizarre findings, the artistic survival title from Klei Entertainment, Don’t Starve, can only be described as a missed opportunity for a Roald Dahl story.

From the off, you take the role as lead character Wilson P Higgsbury. Opening his eyes like a child at birth, Wilson gets introduced briefly to his new world by Maxwell, a rather hurried cigar-smoking gentleman wearing a dapper suit and a boutonniere. He sums up the situation by quoting: “Don’t look so good”, before trotting off and leaving you to this new world, new home and new life.

Now with everything sounding so pleasant, and with the evident picnic planned, just hold your horses. Wilson, a scientist by profession, who can grow a magnificent beard, is not alone. Foes and critters that will surely brighten up your day will soon make you wish you had Chuck Norris as backup. Angry hairy pigs (werepigs), spiders and bloodthirsty tentacles are only some of the foes that will have you running in the opposite direction with your tail between your legs. 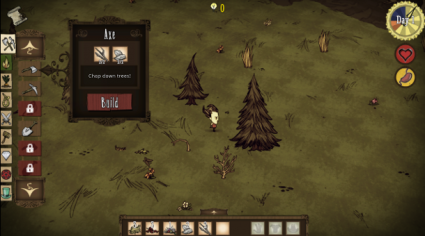 Hungry little fella?
As the game is called Don’t Starve, I guess you can pretty much understand what the aim of the game is here. Though let’s not turn our heads at the fact that stuffing your belly with berries, rabbits and anything that our characters can chomp through is the icing on the cake.

Putting you at the forefront of science is Wilson’s ability to craft certain items, which all have several adaptations. For example, chopping down a tree will grant you with wood, with which you can then use to make a camp fire, feed the camp fire or craft into a portable torch for your explorer needs. Gathering items from farming, scavenging, enemy drops, digging, chopping, and mining will unlock new technology, with most materials becoming stackable for use in the near future.

With so many items throughout the world to use at your disposal, you will soon be learning new skills and crafting new items. This will all make you wish that a Boy Scout badge would be granted to you by Lord Baden Powell himself after every growing achievement you make.

The artistic setting for Don’t Starve is a pleasure to reveal, and I say reveal because the setting will not be available to the eye until you explore. Once you do gather the courage to head through different biomes, getting rid of shrouded areas makes revealing new tricks and possibly new enemies a whole new adventure.

Though remember to lace those adventure boots up tightly, because it’s time to talk enemies. With such a wide range of unusual-looking characters in Don’t Starve, Wilson being one of them, don’t be alarmed if you see angry, hairy pigs (werepigs) chasing you across the map. This is only one of the many weird but well-conceived enemies that simply get you thinking: ‘What the heck is that?’.

So tread carefully, because even if a little frog or bee does seem harmless at first, they could possibly turn their smile into a frown in an instant, homing in on you and taking away precious health.

If one character isn’t enough to get you emotionally attached, you also have Willow, Wendy, Wolfgang, WX-78, Wickerbottom and Wes, all unlockable through experience points. Strangely, these are given through deaths and escaping using a certain wooden contraption that I won’t spoil for you.

With so much to offer in Don’t Starve, one may think that the gameplay could become confusing and that there’ll be numerous amounts of keys to press and technology to remember. Yet very much like games such as My Little Inferno, simplicity and a well-constructed game plays hand in hand. You can use the keyboard if you wish, but the simple but effective point-and-click mouse controls are much easier. So sit back and enjoy.

Should I have gone to Specsavers?
The graphics and visuals in Don’t Starve do not pack that certain finesse and punch that big-name titles like Tomb Raider and other widely known titles thrive upon to enhance overall enjoyment and experience to date. Big games are normally followed up with big graphics that blow your mind, entwining users into the environment and overall enjoyment that keeps us talking for days.

Don’t Starve graphically does not cry out for a different, more complex engine behind it.  What the game does brilliantly though is surround the user in a gothic like hilarious dark setting, very much a cartoon like twist which fits with the story and game-play like a jigsaw.

Don’t Starve pulls off the modern way of looking at new ways of introducing fun into a backdrop, giving the tone of a quirky kid’s story that grownups can enjoy as well.

I beg your pardon?!
Don’t Starve complements its artistic style with sounds that coordinate very well with the story and the comedic nature of the game. Characters will chirp sounds for dialogue rather than using voice overs, and Don’t Starve still keeps key interactions with environments (such as chopping down trees) sounding like they should sound, but giving them a cartoon-like twist.

Kill or be killed?
If digging, mining, farming and all other methods of gathering materials sounds familiar then that can’t be a bad thing can it? Absolutely not. Don’t Starve plays somewhat similar to the giant Minecraft but keeps to its own with comedic elements, solid storybook graphics and inventive sound design. The setting and overall take on this game has been a pleasure to play and has had me chuckling out loud on several occasions.

At first the game does come across as slow-paced, but this is the case with many survival games, period. It’s to be expected that most crafting unlocks are not available to begin with, and the understanding of how everything works is a learning curve that’s enjoyable to work through. Once this avenue is crossed, the game turns into a deep and entertaining survival game that anyone can enjoy.

With the beta in full swing and with updates coming thick and fast, this game is not to be missed if you’re keen on a comedic take on the survival genre. Don’t let this charismatic survival game slip through your fingertips at such a good price.