Simulation games over the years have widely spread into many different simulation clichés, starting from the earliest aircraft simulators to wacky farming simulators, truck simulators and even bus simulators.

One of the first ever games I remember viewing was Microsoft Flight Simulator, and I say ‘viewing’, because my Dad had an over-protective trait for this game. I would stand and watch from a safe distance, making sure I wouldn’t interrupt him in his moment of flying glory.

Now I’m no expert in the field of surgery and I certainly wouldn’t be writing this if I was. Yet I do have a steady hand when it comes to the electronic board game Operation. So with my heart full of hope and my steady arm at the ready, I downloaded a game on Steam which would test not only my steady arm but also my knowledge of anatomy and my patience in the operating theatre.

The ‘operating theatre’, such a pleasant name for a place that should have all emphasis on the word ‘operating’ and not the word ‘theatre’. Not in my book! So yes folks, I have played Surgeon Simulator 2013. I should point out before you read on, that since playing I have been banned from hospitals, clinics and even vets.

You’re in a hospital son; no need to panic! *Cough cough*
You play the part, or rather the hand, of Nigel Burke, an ordinary guy with no profound skills or medical background. Yes, no medical background; already the scene is set for a Laurel and Hardy-type sketch. Helping Nigel through a series of complicated surgical procedures at the pleasant General Hospital of Barnardshire is the aim of the game. A brain transplant, a double kidney transplant and a heart transplant will get Bob up and ticking in no time, just as long as you don’t kill him in the process. 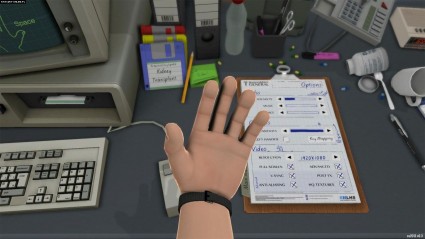 Scalpel, needle… BOB! Don’t be dying on me!
You assume control of Nigel’s right hand, or left hand if you wish to change the controls to suit you. Now if you’re thinking “it can’t be that hard”, think again. Not only do you control the up and down movements of the hand, you also control rotation at the wrist, all of which is mapped to the mouse buttons.

Things get even trickier when the introduction of each individual finger movement is used to help you grasp tools for the surgical procedures. Each finger is mapped to a key on the keyboard and is reminiscent of the control scheme from QWOP. A, W, E, R, and the Space key are used to simulate the hand’s fingers. Using each and every finger can be a tricky concept to grasp, but after some time you will soon wrap your head around it. It will take some practice and you’ll probably kill Bob a few times before you really learn the ropes.

Of course, it wouldn’t be a surgical procedure without the use of tools. There is an assortment of scalpels, saws, needles, hammers, drills, lasers and scissors at your disposal. This will really test how good you are with the control scheme. Each tool will help remove certain organs, cut through certain bones and keep your patient sedated. Most of the time, getting creative with the tools is the way forward, especially after you have dropped tools inside of Bob’s body that are never to be seen again.

If you do run out of surgical tools, don’t worry. Nigel’s professionalism will come to good use as he brings to the table a plastic spoon to help in scooping out Bob’s precious organs.

After you have completed the surgical procedure you will be given a grade from A++ to D, based upon the time it has taken you and how much blood Bob still has left in him. The other scenario is if Bob loses too much blood at the time of surgery, where you will fail and have to start again. So a steady hand and knowledge of the tools is not essential, but can certainly help Bob survive your brutality.

If you use the green syringe and don’t manage to prick yourself with it (turning the screen into a coloured blur which can be countered with the blue syringe), you have the chance to slow the rate in which blood is lost, which will help dramatically in the learning process of the game. 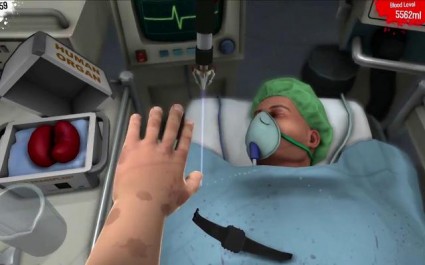 Once you and the hand of Nigel have proven to be a dab hand in surgery, you will find the door to promotion open with the pleasant surprise of a change of scenery. Yes, the back of an ambulance is the new scene where a once quiet operating table in the hospital is a thing of the past. You will now have the challenge of flying utensils and organs; they couldn’t up the ante anymore if they tried.

As you can guess, operating in an ambulance is not the best place to do a life-saving procedure, especially when every bump and dink in the road has your tools flying all over the place. This makes the control scheme feel even harder than before. Bob’s blood level will also be affected by the ambulance; serious blood loss is almost inevitable, and major organs will fly out the back doors.

If you ever grasp the initial procedure then a massive bravo to you; what you learned moments ago in the hospital theatre gets thrown out the back of the ambulance along with the organs. The only bonus is if you do start the game from the beginning, then the hospital theatre should be a breeze in comparison.

Thank the surgeon lords for the release version
Surgeon Simulator 2013 won’t win any awards for best presentation, but the difference between the released version and the Game Jam demo version is a change that pushed the game up a gear. Even though the graphics are not outstanding, they could have been a lot worse.

The scenery and tools are all very easy to distinguish, and for what the game presents with the three different types of surgeries and the ambulance scenes it does very well. All the organs look correct, and even when they are flung around in clumsiness they look the part.

Goodbye Casualty
The tune that rocked the demo was the theme from BBC’s Casualty. I’m glad to say that the theme has now vanished from the released version. There are only so many times you can listen to Casualty’s theme without actually wanting to put someone in hospital.

The released version has a new hit in the form of an 80’s action movie soundtrack which keeps up with the pace of Bob’s heartbeat monitor. A strange combination indeed, but the new tune will soon get your feet tapping and your head nodding away.

Any need to call a doctor?
I never knew a simulation game could have been this much fun in the timescale it presented (three hours max for me). Possibly it’s just the fun and humour value which kept me playing and trying out new tools in surgical procedures.

Even though playing time is limited, that being down to the game having only three operations, some players might find themselves getting annoyed at the controls and losing patience quickly. Like a surgeon, however, you’re in there for the long run, so stick with it.

The main downside is the aforementioned three different operations. They do have some replay value, but it’s not enough to make this game a must-buy. Even with the amount of laughs I had with Surgeon Simulator 2013, I lie in wait for the developers to announce a much-needed extension to the game.

So overall, my heart is still pumping at a steady rate.