It’s not as cheap to go to the cinema as it used to be, is it? It’s unfortunate, but with the cost of movie development going up and recessions all over the place, it’s not hard to see why. Still, the movie world goes on, and that certainly doesn’t stop them looking for the next star.

The question is, does Joe Danger fit that bill?

Lights, camera, action!
Joe has caught the attention of a famous Hollywood director. The natural charisma and charm of the biker, coupled with his thrill-seeking attitude, have all the makings of a major action-movie star. Who wouldn’t want him to feature in their film?

Joe Danger 2: The Movie tasks players with acting out scenes of varying difficulty to create the ultimate motion picture experience, one reel at a time. 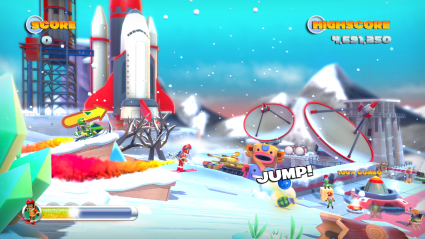 Raider of the lost ark
Joe’s not just confined to a cycle this time. He’ll be using Unicycles, Jetpacks, Skis, and Minecarts to bolt through levels in Movie Mode. Each scene has different requirements, whether Mr Danger is chasing down criminals or escaping from boulders. The Movie plays the same as Joe Danger before it, but each vehicle handles slightly differently. Players can still do wheelies in a Minecart, for example, but obviously it’s a lot heavier and therefore not as dexterous and capable of incredible hang-time stunts.

The Movie manages to remain extremely independent of Joe Danger before it, despite the obvious similarities. Each level has a catalogue of things to do; collecting all the letters in DANGER, obtaining mini-blue stars, and even finding mystery, hidden ones. However, there are also secret objectives that you discover as you play the level, such as defusing bombs or sneaking through a level without being detected.

As such, each level is instantly replayable in order to get the most out of the experience and players will need to approach each level differently, whether they try and max out a score or attempt it in the fastest time possible. There’s definitely more of a purpose and structure to The Movie than in the previous Joe Danger game and that makes the title instantly more playable than it was before (something I didn’t think was possible!)

Joe Danger 2: The Movie also features Deleted Scenes, which take the wackiness to whole new levels, and also raises the difficulty. These were kept in purely for the developer’s enjoyment at our expense, but they add a lot more to an already full-to-the-brim package.

A new hope
The Movie is a beautiful game. While using the same engine as JD:SE with extra bells and whistles, somehow the game looks brighter, more vibrant and sweeter on the eye. Hello Games have created wondrous environments, taking this a long way away from the repetitive-in-comparison landscapes of SE. Joe will find himself going up against Prehistoric creatures, trawling through sandy deserts, and battling against robots in futuristic set-pieces. Each area comes complete with Hello Games’ stamp of perfectionism, which we’ve all come to expect.

The point is that Joe Danger 2: The Movie is, hands-down, one of the most attractive games on XBLA to date. 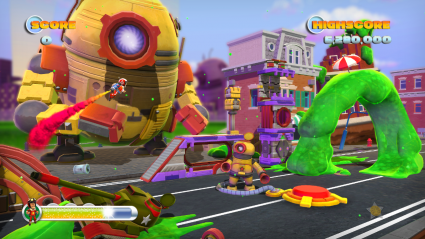 Fellowship of the awesome
The sounds and music of Joe Danger are always quirky and appropriate. There’s familiar fanfare in here; such as collecting letters, and the introductory ‘JOOOOOE DAAANGEEERRR!’.

However, there are also newly made tunes that will stick in your head unapologetically. Joe Danger 2: The Movie is designed to stay with you no matter where you are, and the music plays a major part in that.

We are one
Joe Danger 2: The Movie is more multiplayer friendly than ever. For starters, there’s the play/create mode. You can jump into a level and press Y at any time to change the layout, whether you want to put a spring in front of Joe, a large rampway or even a devlishly smiling bomb. While not up to LittleBigPlanet’s standards, there are an insane amount of possibilities open to players, and once done, they can share the level with their friends online.

There’s also the local multiplayer mode which supports up to four people. The aim of the game is to beat each other to the finish line by performing mad stunts, using boost and even punching opponents off their bikes, Road Rash style. This is a frantic, fun mode that not only feels completely appropriate in Joe’s world, but is also bucketloads of fun. 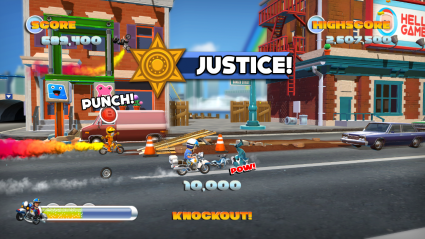 Justice will be served.

The last hoorah?
Hello Games are ready to close the book on Joe Danger, and while that is difficult for them, after playing The Movie, I think we’ll  be the ones fighting back the tears.

This is, without doubt, the game to own on XBLA this year. Undeniable quality and immense replayability, this has everything a great game should have and it comes at a bargain price. It does everything a proper sequel should, keeping the playability fresh and making it impossible not to come back for more.

Essential in every sense of the word.