Mario and Sonic at the London 2012 Olympic Games (3DS)

Remember when they announced Mario and Sonic were going to be in a game together? Remember how you first felt about that before it became a series of mini-game mish-mashes? Pretty good, right?

Unfortunately, that game we’ve been long awaiting still hasn’t materialised, but we do have another Olympic escapade featuring the world’s most famous plumber and that spikey-blue phenomenon traipsing around London.

That’s got to count for something, right?

LAAAAAAANDAN
To celebrate this year’s UK Olympic Success Story, (has it really been four years since the last one?), Mario and Sonic have come to London to compete against one another. However, while they’re raring up for the battle of the ages, Bowser and Eggman have other plans. Hidden behind the clock-face of Big Ben, both villains are disgruntled that they haven’t received an invitation to compete, especially after all the training they’ve done (it doesn’t show…). Seeking revenge, Eggman has devised a machine that will send out an all-encompassing, thick fog over London, inevitably forcing the games to be cancelled.

However, this isn’t just any fog machine. Not only does the fog come out in very different colours, it produces living shadows that can compete in Olympic events. Inconceivable.

The story is separated into two sections, with the Mario Brothers taking one path and Sonic & Tails on the other (you can alternate between them at any time). In the beginning, each set of characters are confronted by the shadows of their opponents. Strangely, Mario can’t tell the difference between foggy purple and grey Sonic and real Sonic (Probably because he’s a bit racist and thinks all hedgehogs look the same…), and Sonic can’t seem to work out what looks different about Mario, except that, you know, he’s not dressed in red.

However, as the penny drops (it takes a lot longer than it probably should) both sets of characters work out this is all part of a horrendous scam and so do everything they can to stop it. The story isn’t really a journey of twists and shocks, but it does feature a wide ensemble of Nintendo and SEGA characters, from Amy Rose to King Boo.

It seems anyone can be an athlete. Don’t feel so special now, do you, Usian Bolt? 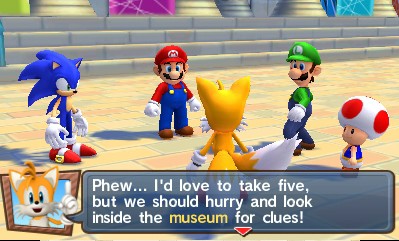 The guys are all here!

British Bulldogs
Mario and Sonic features a slew of different sporting events which makes use of all the 3DS functionality (apart from Augmented Reality, which is a massive oversight in my opinion).

You’ve got everything from hurdles to pole vaulting to yachting in this package, each played in very different ways. With the Yachting, for example, you’ll need to blow into the 3DS microphone located in the touch screen, which serves as a wind for the yacht, then you stabilise the boat by using the analog. Shooting sees you using the Gyroscope in the 3DS to aim, and tapping the RB to shoot, and Archery has you draw the bow with the stylus and then let go, taking the wind into consideration.

While I’ve given examples of well handled games, some are absolutely dreadful. Volleyball is quite possibly the most awful thing I’ve played on the 3DS, as you wait for the precise moment (which never seems to come) to tap a button to defend and spike the ball. Weighlighting requires you to shout at the right time (no button pressing here, which is a seriously bizarre development choice) and as for the boxing … a one-punch knockout? Abysmal…

That said, there’s still a lot of fun to be had here. You can wade your way through a half-entertaining story mode, go in for a multiplayer session with local friends (there’s no online play to be found), play a Highlight Match (which enables you to choose one event and play a single round) or a Medley Match where you can go through an assortment of Olympic events back-to-back, whether you designed the Medley or it’s a pre-defined one. It’s just the quality of the games on offer does leave a lot to be desired. 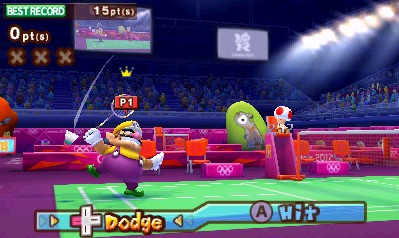 Steady on, old chap!
Graphically, this is quite elegant to behold. SEGA make full use of the 3D functionality, even if it doesn’t serve much of a point to the gameplay. Mario and Sonic is vibrant, well designed and looks every bit the high-budget console release. The cut-scenes are well animated, and the characters nicely drawn. Even the way London is captured with the red buses and Big Ben is well done by SEGA.

You’ll also be able to play with many old favourites, like Yoshi and Toad, but also newcomers and rarities like Waluigi, Metal Sonic and even Vector. All elegantly designed and crafted to make your eyes drool with cute-goop

Tally-Ho
Despite being in Britain, the Italian Mario doesn’t try to put on a pish-posh accent, and Sonic’s grunts still make him sound like the super-cool American dude. London sounds like London, with cars honking horns and Big Ben’s chimes. Even if it’s all cartoonified, this is distinctly the capital city of the UK, and that feeling alone does make the story package quite refreshing.

The game actually bundles with some well orchestrated music as well. This really surprised me, as there’s a real mix of the dramatic with the soft and soothing. Not the type of game I expected to handle sweeping symphonies so well. 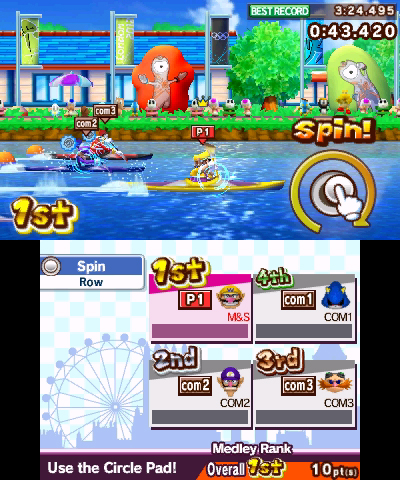 Triad-ath-alon
Sadly, however, Mario & Sonic’s latest outing is a lot of miss with little a bit of hit. With an abundance of ‘meh’ mini-games, a lack of online play, no Augmented Reality and some shoddy controls, there’s very little to love. SEGA would have probably been better off waiting for the Circle Pad Pro, so they could have at least added additional analog support. The game would probably have still got here in time for the games later this year. Still, there is some fun to be had here, and it’s not an entire loss.

Unfortunately, London 2012 is neither a title befitting the heritage of the Olympic Games or Mario & Sonic. In fact, this series is seriously starting to wear out its welcome altogether.

Time for that cross-over platformer, methinks.