I booted up Never Alone to be greeted with a nondescript title card of a young girl and a fox staring out into a night-soaked tundra. There was little to go on from this imagery, as I had no preconceptions of what this game was actually about.

In the menu, there was a section entitled ‘cultural insights’, which featured a short film about the Inupiaq people, their culture and their small community. After watching that, I had a better sense of what to expect. The minute-long film I saw was one of twenty-four, with the rest being unlocked as I progressed through the short story. I was fascinated to learn more about a people I had little-to-no knowledge about, so I proceeded to start proper to find out more…

Never Alone is based on a folk tale told by the Inupiaq, the legend of Kunuusaayuka; a story of a young boy and a mystical arctic fox who go on a journey to stop the eternal blizzard that has been needlessly tormenting the boy’s village. The original premise has been adapted to tell the story as a co-op, side-scrolling puzzle platformer, which at first may seem like a dumbing down of a tale with complex character archetypes, but it fits well into the linear progression of the story as each chapter is clearly bookmarked through its visual art design.

In this version of an unheard tale you play as a young girl named Nuna, who is saved from a polar bear by an Arctic fox that has a mysterious connection with ‘Silla’ (Inupiaq for ‘the spirit of the land’). The fox’s ability allows Nuna to progress through the harsh landscape by summoning ‘spirit helpers’, so they can both journey through the Alaska setting to find the source of the blizzard. On the way, they encounter various evils blocking their path, which they have to overcome through teamwork. 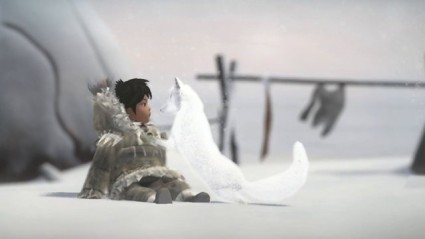 Arctic Foxes are actually common pets for the Inupiaq and they are surprisingly well house-trained.

The story feels inspired, and clearly has a lot of respect for the source material it is based on. It can be a challenging feat to successfully execute a narrative based almost solely on ancient folk tales (see Enslaved: Odyssey to the West on how not to take liberties with ancient parables, for instance). I do feel that this was benefited with the context of the cultural insight videos.

Never Alone feels like a project in two halves: the execution of the game itself, and a surprisingly well-shot documentary production that provides ‘behind-the-scenes’ context on some of the idioms, the items collected by Nuna, and even the winter-wear. Without this, I feel that the significance of the story’s conveyance of community and hardship would have lost a lot of its meaning to me and it was nice to stop mid-game to find out more on the significance of a character like ‘Maneater’ in Inupiaq culture.

You can switch between the two when playing alone, or if you are lucky enough to have one friend, take control of Nuna whiles your partner controls the fox. They both play relatively the same, but the fox is a lot quicker, can summon spirits, and can jump further distances, while Nuna can push crates, climb ladders/ropes, and generally do all sorts of things that would require opposable thumbs.

It feels very much like Limbo, in the sense that you are constantly chased by overwhelming foes and forced to reflect on the death of a child if you happen to miscalculate a treacherous jump. The tone is much less dark than the aforementioned, but in a game where even the aurora borealis is out to kill you, it can be difficult to keep chipper about the whole predicament that you and your companion have to face. 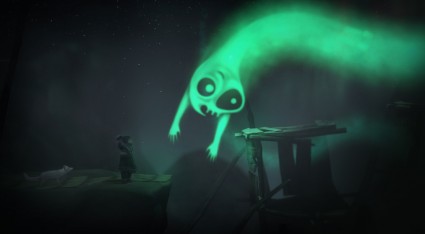 It may seem like he wants a hug, but don’t take his word for it.

In true co-op fashion, progression is only feasible when the pair works together. This is much easier to achieve with a friend in the room to coordinate, but I faced problems playing alone when I switched to the fox and Nuna threw herself down a spike-laden pit, in what I can only assume was disapproval in my methods of getting from A to B.

I’m aware that the point of the narrative is to convey the bond between beast and man, but the whole charade grew tired after the umpteenth time one of the characters had a suicidal lapse of judgement and cast themselves into the icy water or down a bottomless pit. I feel that this design fault could have been fixed with a simple ‘sit, stay’ mechanic, as there were more than enough unmapped buttons to avoid the whole issue.

Never Alone is, if anything, an insightful foray into the Inupiaq’s way of life. Everyone involved with the project seemed proud to retell a story that has been told around campfires in Alaska for decades, albeit on a more modern platform. The game itself has a few technical issues that can be easily overlooked, especially when playing with a friend/loved one/Arctic fox.

Clocking in at around four to five hours, the experience is a brief one, but it’s the perfect length for a re-imagining of the original folk tale and it doesn’t linger longer than feels necessary. If you are looking for a game to play with a younger sibling over the holidays, and want to impart unto them wisdom of a proud people, then look no further.