Have you ever felt like games these days take themselves too seriously? I’ve always wondered how, despite decades of repetition, developers can still send big dudes off on ‘save the world’ missions with a straight face. Maybe it’s telling that some of the biggest and most revered titles of our generation (Gears, CoD, Elder Scrolls), all seem to contain nuggets of humour and sometimes a self-awareness that breaks the fourth wall and raises a chuckle amidst the bloodshed.

Prepare to have that wall well and truly smashed with One Epic Game, the new arcade platformer from Grip Games. No, I haven’t heard of them either, but who cares? Taking influences equally from Canabalt and Metal Slug, the game seems to not only play fast and loose with suspension of disbelief but downright makes fun of the fact it’s a video-game. The big question is: does it work? Well, mostly…

One Epic Story
Rather than attempt to shackle the simple, arcade action with a boorish plot about a brave soldier saving the Earth, One Epic Game (OEG) instead pokes fun at all the biggest and (crucially) the most overdone genres and settings in gaming. So you’ll be leading main character Alpha Dog (even his name is a jibe) through a zombie outbreak, a post-apocalyptic wasteland, World War 2, an alien invasion and a fantasy world.

The funny thing is there’s actually very little in the way of plot, but that’s kind of the point. It makes a statement about the often scattered and pointless nature of action game plot-lines, and things just happen. There’s usually a self-aware and hilarious reason given, but it’s no more believable than ‘we just wanted a change of scenery’, and it’s kind of not supposed to be. It’s hard to explain; it needs to be experienced.

What slim plot there is tasks Alpha Dog with defeating an archetypal evil dude Zork, who is causing every possible kind of gaming disaster to occur at the same time. The exchanges between Alpha Dog, the President of the USA (referred to as Mr. P) and Zork are snappy and laugh-out-loud funny. The script touches on current affairs as well as video-game tropes. Alpha Dog is aware that he’s a video-game character; in fact he’s taken the OEG gig because his manager says it’ll get him some kudos for doing an indie game! 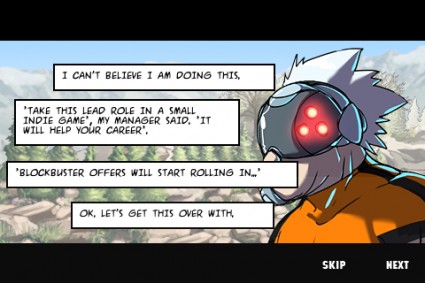 That manager is gonna have a lot to answer for...

For those who prefer arcade action to story-based missions, there’s a Free Run mode which lets you see how far you can get on each world. There’s also a Challenge mode that sets you tasks like staying alive without shooting anything, or managing with only one heart of health. Medals are awarded at set milestones, and I can see this giving the game longevity after the main campaign is done and dusted. Scores and medal data can be synced with Crystal, publisher Chillingo’s own sort of social networking service. Add your friends and gloat about your scores folks!

Unlike Eat Lead, OEG succeeds in toying with the idea of self-awareness and weaves a hilarious and memorable little story. It’s all about the gameplay though, and this is where it gets tricky…

Some Epic Bullshit
Before I start ripping into it, I’m going to give OEG’s gameplay a fair assessment. Then I’m going to rip into it.

The basic idea is that Alpha Dog runs from left to right and you have to make him jump obstacles and shoot enemies. Get hit too many times and it’s back to the start, or the last checkpoint for levels that have them. You can collect stars to get points and power-ups to give you more health and upgrade your default pistol. There’s also a jetpack that helps you get across big gaps.

It’s all simple to control as well, rejecting the usual ghost-buttons and instead splitting the screen in half with an invisible line. Tap the left side to jump and the right to shoot. It’s easy and almost impossible to get wrong; no more missing that button the size of a 5 pence piece that still obscures half the fucking screen.

Grabbing weapon upgrades is essential, as the enemies come thick and fast and in all shapes and sizes. Obviously they’re themed accordingly with the levels, but every stage type has ground and flying enemies that each take different tactics to bring down. Thankfully, each power-up has a different use. Shotguns go through multiple enemies, machine guns allow constant fire, rockets home-in on targets, and flamethrowers allow you to create a wall of flaming death in front of you. Standard fare, but all of them work great and are perfect examples of weapons that are repeated again and again in modern games.

It’s not all plain sailing though, as some platforms will sink when you land on them and most others are strewn with obstacles. These range from simple barrels to metal spikes and flaming hot meteors. Avoiding them adds to the hectic and frenetic gameplay, and forces you to plan ahead and time your jumps properly.

It all starts really well, too. It’s fun, exciting and simple; everything a mobile game should be. Then it takes a nosedive and morphs into an impossibly frustrating gauntlet of utter misery. Platforms sink too fast for you to jump off, and gaps become so wide you need a jetpack when one isn’t offered. You have no choice but to land on groups of enemies, and your pistol fires too slowly for you to pick them off before you get hurt. Health power-ups all but vanish, leaving you with about four hits until game over. Flying enemies begin to sit at impossible-to-hit heights, too low to run under but not quite high enough to jump and shoot.

The worst part is that the levels are random. Every time you restart, the platforms change and the entire layout shifts. That’s great right? You get to play a fresh level every time? WRONG! It makes it impossible to practice, learn patterns and develop techniques in a genre where platform memory is paramount. It forces you to take leaps of faith and rely solely on your reactions to survive. The clincher? This random generation system regularly spawns jumps you can’t make, platforms so full of shit you can’t land on them without taking at least two hits, and jetpacks when they’re not needed. Even they don’t help; you shoot so far off the screen you can’t see where to land.

OEG isn’t totally bad; in fact it’s really good for a mobile game. It combines simplistic combat with frantic platforming and manages to be funny at the same time. The story keeps you playing and the levels are varied and inventive. Why the difficulty has to ramp up 20% of the way through the game is a mystery only Grip Games know the answer to.

Epic Animation
OEG looks brilliant for a mobile title. The worlds and sprites are drawn with excellent detail, and the comic-book cut-scenes make me wish there was a companion comic. Each enemy has character and while the animations don’t achieve the dizzy highs of Metal Slug, they’re still creative and funny. There’s no slow-down at all, no matter how much shit is on the screen, and everything looks lush as you dash through the expertly-drawn worlds. 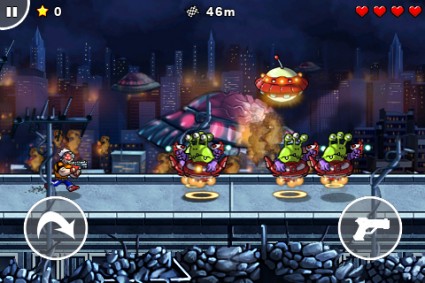 Things can get 'pretty' hectic! Get it, pretty? Like it looks nice? Oh, never mind...

Kudos should also be given for the backdrops to each world. Rather than simple, static backgrounds, each one is alive with animation. Little mushrooms clouds light up the background of the post-apocalypse, while bomber planes and tanks do battle in World War II. The city burns as aliens attack, and a volcano erupts behind the action in the fantasy kingdom. It helps build these little worlds no end, and shows an attention to detail rarely achieved in a mobile game.

An Epic Score
In-keeping with its mocking style, OEG boasts a suitably epic orchestral soundtrack. It also presents various tracks for each world, tailored to the environment and perfectly suited. All of them fit firmly into the rock category, but have various added instruments depending on their use. While it won’t win any awards, the score is more than capable of underpinning the frantic action and completes the OEG package with aplomb.

Sound FX-wise OEG doesn’t do anything too exciting, opting for standard bangs and crashes. What it does do is impeccable though, each gun having its own sound and enemies exploding with a satisfying boom.

I’ve ran out of ‘Epic’ puns…
One Epic Game manages to be funny, exciting, simple and effective all in one little package. Games poking fun at other games can be risky, especially for mobile titles, but OEG does it with a casual ease usually reserved for web comics and pithy blogs. It has a decidedly indie vibe about it yet still manages to feel like a professional, quality chunk of entertainment.

Its difficulty will definitely turn many off, especially so early in the game. Those who look for a gruelling challenge requiring hours of practice and lighting-fast reactions will gorge on the gauntlets offered here, and maybe it’ll push some of those who usually shy away from toughness to try a bit harder.

Either way, it’s undeniable that OEG stands head and shoulders above many of its contemporaries. It’s refreshing to find a witty, funny, exciting action title on a platform that so often produces puzzlers, sims and tower defence clones. If it sounds like your cup o’ tea, then I urge you to get it. It’ll keep those irritating blips of daily boredom locked up till you can get home to the console again…

One Epic Game is available on the iPhone for 69p. It’s also on Android for free so there’s no excuse not to try it out!