Suffice it to say, there have been a lot of fantasy video games over the years. More and more keep coming, and as gamers we can only hope each one stands out in its own way. Hopefully each one has something unique to offer.

The game is set in, uh… someplace. I’m not really sure. The intro went by so fast and the narrator spoke so quickly, I had no idea what was going on. There was something about elves, dwarves, and men (original); a war that started for no reason; and a land that was covered by chaos, depicted by badly-done fire animation.

Imagine if someone took all the elements of Tolkein’s work, shook them around in a box, and then tossed them out and used the chaotic leftovers to create a game. That is this game. It’s really unoriginal and screams ‘generic fantasy’ at every turn.

Did I hit anything?
The developers didn’t lie when they said this was a fantasy hack and slash. The player is faced with droves of enemies at every turn and is encouraged to cut away at them, either as a magic user, a thief, or a swordsman. The problems with this system are legion.

For one, the camera design makes seeing incoming enemies difficult. It cannot be adjusted from its upward-angled, distant gaze, which means enemies running at you from ahead will not be seen until they are right in front of you. Try using arrows on that.

Speaking of arrows, there is no aiming system. Hopefully you are lucky enough to guess the right direction to shoot your opponent. In addition, the game has no targeting system, so using your sword to try and hit an enemy right beside you can be just as tricky. For the most part, the player is rapidly pushing buttons in the hope that they hit something.

Despite these problems, the fighting is rather easy. There’s literally no skill involved. You repeatedly bash away until everything is dead, and then move on to the next group to kill. 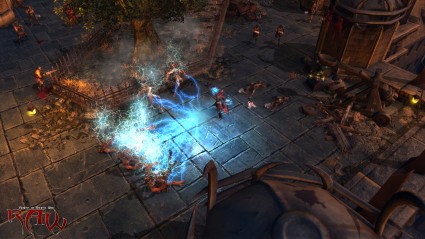 Shame on you, RAW, for taking all the fun out of electrocuting monsters.

Levels are entirely flat. There’s no going up or down hills, or through water. They aren’t continuous, either; eventually the player must travel to another ‘zone’ by going through a shiny gateway.

In addition, there’s the armor and treasure that can be found, including the ‘Human Shield’, the ‘Sacred Purple Leggings’, and ‘Magic Ring’. Have I mentioned this game is generic?

As for the ‘why’ of the story, the game never really explains why your mage/swordsman/thief is running around in their perspective areas. There’s the badly-done intro, and then suddenly the player is killing things. Explanations for quests are practically as bad. Suddenly someone just runs away with a chest of gold for no reason, and his best friend sells the man out so that you won’t kill them. The dialogue in these scenes is laughable.

In addition, the way the game sets up its checkpoint system is awkward. There are checkpoints that the player is returned to when they die, but this only happens if the player has a soulstone; if they don’t, it’s game over, and you can only carry nine soulstones at a time. It doesn’t really make the game any more interesting or challenging; it’s just frustrating.

The art of mediocrity
The concepts of the game are pretty good, but the animation is lacking. The opening scene shows the stiff cut-outs of characters being moved through a story pop-up book style explanation of the events, including the aforementioned ugly fire effects. Needless to say, it’s less than impressive.

The gameplay animation isn’t worth much either. It’s somewhat glitchy, but not in a sense that is harmful to gameplay at least. For instance, a treasure chest I opened behind a house suddenly appeared to be floating on top of the house when I walked away.

Sounds of the chorus
If the game is a generic fantasy, then the soundtrack is a generic fantasy soundtrack. It sounds as if it were vaguely like the music of every fantasy movie ever created. There’s operatic chanting and ominous drumming, like Skyrim but watered down. It certainly fits the mood of the game, but it doesn’t stand out as enjoyable or interesting.

There’s also no voice acting, other than the narrator who seemingly doesn’t know how to breathe between sentences.

Multiple players, multiplied boredom
The co-op mode is essentially the single-player mode, with one more person sharing your misery. The addition of another doesn’t do much, other than to allow access to multiple character types. You can have a thief and a mage, or a swordsman and a mage. That doesn’t change the difficulties of combat or the lackluster levels, story, and gameplay.  There’s nothing about co-op which in any way enhances the experience. 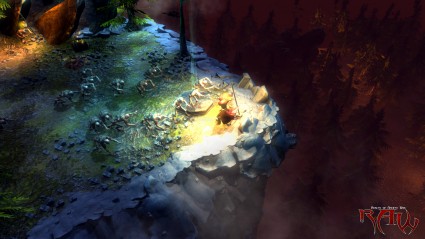 Everything this game can do, other games can do better.

At the end of your journey
There are so many better fantasy games out there than RAW. Maybe they aren’t hack and slash, but at least they aren’t brain-numbingly bad. This game has no discernible plot, and in an attempt to create something new by combining two different genre staples, it manages to make a dull, uninteresting experience of both.

The idea was compelling, but the execution more than flawed. This game is definitely a pass.