What a difference a couple of years make. Before Assassin’s Creed was released by Ubisoft, the gaming world was going absolutely off their rocker at the sight of the athletic Altair, silky looking combat and massive cities. After the actual game came to light, it became apparent that Ubisoft had forgot to build a vaguely interesting set of mechanics around their innovative ideas. I’ve rarely seen critics and gamers reviewing in such stark contrast to each other, with some praising its ambition and scope and others rightly lambasting it for its massively underdeveloped structure and glaring weaknesses.

Assassin’s Creed sold very well so a sequel was inevitable, but it appears that a lot of damage has been done as Assassin’s Creed 2 has ghosted onto the shelves almost unnoticed. Granted Ubisoft made the brave, or stubborn, or just plain foolish decision to release the sequel in the wake of Modern Warfare 2 (other publishers probably wisely ran for the hills at the sight of that behemoth), but the fanfare has definitely been notably muted this time round. It looks like a lot of the criticisms have been addressed though, so my interest in the series has been reignited, but I bought this game feeling ever so slightly wary that it had silently crept into stores (not unlike an assassin) for a reason.

Back to the past, part 2
Assassin’s Creed 2 follows on from the rather abrupt finale of the first game, with Desmond Miles stuck in his Abstrego holding cell staring at a mosaic of strange markings left by the previous occupant, known only as Subject Sixteen, the last victim in the Templars’ efforts to locate the all powerful Pieces of Eden. Fortunately you fly the coop pretty quickly, sprung by the undercover assassin Lucy, with the aim of being trained as an assassin yourself through the use of their homemade Animus. Rather than following Altair’s quest of public assassinations, pickpocketing and flag collecting however, you’ll be time travelling back to Renaissance Italy, and into the mind of Ezio Auditore da Firenze, the son of a powerful Italian banker who becomes an assassin later in life with revenge on his mind. Ezio is a fantastic protagonist, he’s cheeky, flirty and good fun, but also fiercely loyal and, as you’ll find out throughout his story, brutally vengeful if given a reason to be. I also found myself sympathising with Ezio’s quest a lot more as you get to experience his life before he became an assassin, which gives a much better understanding of his motivations, although because of these sections it takes a bit long to get into the game proper.

Again the story is split into two, alternating between Desmond’s time in the present and controlling Ezio’s tale through the Animus. Desmond’s screen time has been pretty drastically cut back, which is a relief considering how ploddingly dull his conversations with the eeevil Dr Vidic were in the original, although it has to be said that Desmond is a bit more likable this time. He has now shaken off his “reluctant Chosen One” personality and is a lot more enthuisiastic about taking the fight to the Templars. Unfortunately the other characters that feature in the present day are pretty uninteresting, and one is just downright infuriating. I was surprised to see that the comedian Danny Wallace has lent his likeness and voice to the character Shaun Hastings, the Assassin’s Animus technical expert. My surprise was quickly replaced by rage however as it becomes apparent that his character is nothing but a sarcastic twat who exists only to spit venomous insults at Desmond every few minutes. Ubisoft have taken the stereotype of the sarky Brit and turned it into a very nasty piece of work, and I’m especially disappointed to see the usually great Wallace so readily involved in it.

Ezio’s story is altogether more satisfying, thanks to a broad range of varied characters as well as the meticulously detailed setting. You’ll meet plenty of allies and enemies throughout the course of the game, and with a few exceptions all are well conceived and acted, although most of the enemies (both past and present) lack a bit of depth and become lost in megalomaniac strereotypes. A young Leonardo Da Vinci is wonderfully eccentric, a foul mouthed Venetian thief acts as one of many romantic foils for Ezio and Uncle Mario is introduced with an unexpectedly hilarious one-liner. Through one of the Animus’ newer features, you can also read up on some historical information about the characters, which gives a welcome bit of context regarding who you’re talking to, wooing, or stabbing in the jugular. 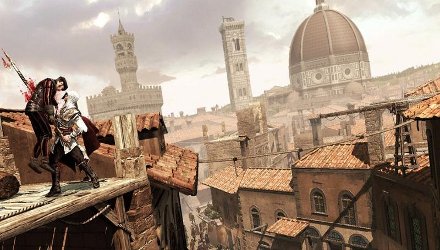 A nice walk along the Florentine rooftops, how romantic

It’s nice to see that Assassin’s Creed 2 has been given some noticeable plot progression this time round rather than the scattergun approach of its predecessor.The original game laid it all out for you at the start, giving you nine targets to get rid of and doing very little to get in the way in between. Assassins Creed 2 takes much more control with the narrative and unveils new twists and plot developments at a considered pace, rather than just blowing its load three or four times in the course of the entire game. Ezio’s story starts out as a simple revenge mission, and while revenge remains one of the overarching motivations, you also get involved in a very meaty conspiracy story as some of Italy’s nobles become involved in a violent power struggle. The canon is generally a lot more fleshed out, and it’s a pleasure to unveil each new tidbit related both to Ezio’s story and how it all fits into the present day struggle with the Templars.

Variety is the spice of life (and death!)
It’s been nice to see that Ubisoft have listened to criticisms regarding Assassins Creed. I can’t recall many times that a developer has so openly accepted faults in their product, especially a powerhouse like Ubisoft, and I really believe that they’ve made an effort to rectify them. Its biggest problem, the unwavering repetitiveness of the main spine of missions, has been well and truly cast aside in Assassins Creed 2. No more are the pickpocketing, eavesdropping and flag collecting (it still sounds stupid two years on) missions to get closer to your target, with around fifteen new types of mission (as well as combinations of them) making up the main story thread. The main quest itself is entirely linear in terms of which mission you select next, but this is instantly preferable to the formulaic “three step program” of the original game that was repeated for each of Altair’s targets, which constantly reminded you that you were playing a game, rather than watching a story unfold.

The missions are much more varied this time, with escort missions, less significant assassinations, infiltration, boat stealing, carriage racing and much more. The missions also have a more meaningful relation to the story arc as a whole, rather than those goddamn “I’ll give you a map with his location…if you collect twenty flags from the rooftops of Acre! How fun!” (Is it obvious I really hated those flags?)

The linearity of the main mission thread has been offset by ladling on piles of side missions for you tackle at your own pace. The side missions are split into two main groups; ones which can be triggered by walking into a marker, after which they take precedent until completion, or more flexible objectives that can be chipped away at whenever you please. You can collect new assassination contracts from pigeon coops (which are sometimes better conceived than the main story assassinations), talk to thieves and beggars with the aim of challenging them to a race, accept a request from a scorned wife to beat up her cad of a husband and also take part in escort missions.

A new notoriety system has been implemented which gives you an indication of how well known you are in each city, which can be reduced by spending time ripping down wanted posters or assassinating witnesses. These elements all act as welcome distractions from the main storyline every now and then when you feel like you need to take a break try something different, which is a relief, and something that Assassins Creed was severely lacking in.

I found the more flexible, less concretely defined side interests to be a lot more engaging. You’ll find the usual sandbox fare such as collectible feathers and codex pages to upgrade your equipment, but you can also spend a good few hours following up some of the more unusual objectives. Ezio is able to take advantage of a shiny new monetary system, which allows you to buy new armour, weapons and clothes, but also allows you to invest in your family’s Villa in Monteriggioni. Art, statues, codex pages, weapons and armour all find their way back to the Villa de Auditore after they’ve been purchased, increasing the Villa’s value as a result. Money can also be spent on renovating the shops and services in the town which again raise your Villa’s appeal to the public. The higher the value, the more money it will periodically rake in, as well as repairing some of the cracks in the walls, smashed windows, and apparently even somehow improving the weather! Assassins’ tombs are few and far between, but when located give you an opportunity to test your free running skills through extended platforming sections in a variety of dungeon style locations.

The many locations you visit across Italy are also dotted with “glyphs”, which are essentially chunks of computer code that have been left behind in the Animus’ memory by a previous occupant. Finding and scanning these glyphs presents you with a few interesting little puzzles to solve, unlocking a tiny fragment of a video each time you succeed. I particularly liked searching for the glyphs; the puzzles are actually pretty fun to do and give a bit of insight into how the Pieces of Eden have shaped some of the major events in history. Not only that, but you’ll want to unlock the full video, the conclusion is quite a doozy, if not only for the level of discussion is it sure to trigger.