Popcap sure know how to make an addictive game. One only needs to look at their track record, with the likes of Peggle, Zuma, Plants vs Zombies and Bejeweled under their banner. With an equally excellent label of quality laminated to their products, Popcap are, without question, one of the premier gaming developers out there today. However, if there is one nut they’ve yet to crack, it’s creating a truly compelling, enthralling online multiplayer experience on Xbox Live. Sure, Peggle had an online mode, but it failed to create the same levels of brilliance the single player component offered. They came closer with Plants vs Zombies but ultimately the online experience felt more of a gimmick.

With Bejeweled Blitz Live, did they finally hit the nail on the head?

Bejeweled Blitz Live is only the second game under the Bejeweled banner to come to Xbox Live, and what a radical departure from its predecessor it is. Unlike Bejeweled 2, Bejeweled Blitz Live encompasses the original classic Bejeweled and Bejeweled Twist. For those that haven’t played it, Twist has the same grid as normal Bejeweled, but instead of moving a gem horizontally or vertically with one move, you now twist a cluster of four gems together at the same time and can move them all over the board. Naturally, this completely changes the complexion of the game and the way it is played, utterly reinvigorating the experience. One other big difference here is that each turn on the grid lasts a mere 60 seconds and it is your job to score as many points as possible in that timeframe using hypercubes, bombs and supernovas.

As I was playing, I likened the differences between Bejeweled 2 and Bejeweled Blitz Live to be like that of Uno and Uno Rush. We’ve gone from a relaxed, slow-paced, easy-going game, to a fast-thinking, fast-moving piece that is much more suited to online play. While the single player for Blitz does dry up quite quickly, when playing with and against people, the experience thrives and flourishes.

Ballroom blitz
As you play through the game, depending on how much you score, you will earn experience points for every game you play and it will allow you to level up. This goes up to at least level 50, so its sure to take you a while to achieve maximum synchronisation. In addition to that, you’ll also be able to compete with the rest of the World, as there’s a leaderboard where you can compare against others for how much experience you’ve earned. With an ever-evolving online landscape, this is sure to make the game continuously competitive.

The controls for the game are also much more suited to faster play than previously. In Bejeweled classic, the buttons on your Xbox pad become like a D-Pad, so X moves the jewel up, A moves it down etc. This is much better than the cumbersome controls from Bejeweled 2 where you had to hold in a button and then move it in your desired direction with the analog stick. As for Twist, a simple button press will turn the circle clockwise or anticlockwise. Even the menus are easy to navigate with a simple button press, allowing you to alternate between a game of classic or twist at any time! Honestly, the controls have been simplified so much, we’ll have videos of Gorillas on You Tube topping high-score boards! 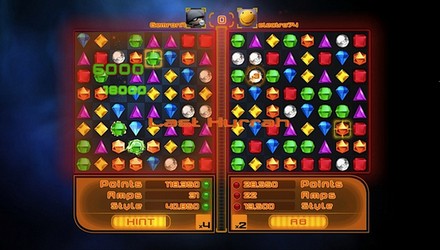 Sparkle like… Edward?
While the key elements of Bejeweled look the same as they have done over every instalment of the game ever released (see picture above), the menu system is probably the only noticeable change here. All in all, it offers a very futuristic vibe that’ll make you feel you’re headed toward the 22nd Century and the way of the future. Ironic then that I felt quite differently about the music.

Anyway, back to the graphics, while it’s not as high-definition and of high quality as Bejeweled 3, it’s perfectly suited to the game and still looks great on my 42″ TV. The only difference here is that like most titles these days, your Xbox Live Avatars are also supported for online multiplayer. There’s not much to say here that hasn’t been said before and will be mentioned again. Bejeweled Blitz Live looks just the same as it’s always looked and that’s totally fine with me.

Dancing in the moonlight
The music has a very retro, Amiga-esque feel to it, that may help you to remember gaming from the 80’s rather than the 21st Century. This isn’t necessarily a bad thing as some of my fondest memories from gaming came before I was a teenager, but it may take one or two people off guard when they approach the game for the first time.

The music is always very calm and relaxing and while it still has an upbeat tempo to it that reciprocates the fast paced nature of the game you’re engaging with, it never feels like it’s going to help your blood pressure soar through the roof and cause you to bounce off the walls in an enraged temper. Considering Popcap recently came clean and admitted they’ve engineered their musical score for Bejeweled to help people combat a smoking addiction, it’s not hard to see why they’ve adopted a calming melodic approach.

Popcap have also accidentally introduced gaming’s most catchy female voice. The breathy ‘Go’ from the female announcer at the start of each game will have you involuntarily emulating the voice in the same vein you tackled the male announcer from Halo when you were about to go to war. You’ll even find yourself counting down from ten with her at the end of each round. Scary how these things get in your head, isn’t it? 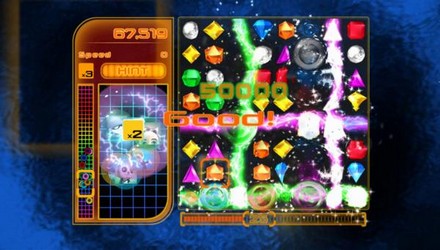 Twist and shout!
You may remember I recently reviewed Bejeweled 3 for the PC, and even though the general theme of the game is the same, both of these end products are utterly different. With Bejeweled 3 having an obvious versatility in game modes yet a distinct lack of online multiplayer, and Bejeweled Blitz Live seemingly being designed for party play and fast-paced action, it shows exactly how much such a simple game can be diversified.

You’ve probably heard a lot of talk about the 16 Player Party game which is one of the selling points for Blitz. Basically, you and up to 15 others can join one game and play against each other in real-time for the highest score. Naturally, this becomes a lot of fun with banter coming across the airwaves but also with a continuous fluctuation in score, you’ll feel the desire to win is rife. With the game being so easily playable, anyone can potentially beat anyone and you can keep that going until you’ve made your point and achieved the title ‘King of the Heap’, or even if you just get bored.

The game also supports local multiplayer, so you and a friend can play against each other on the same sofa via split-screen. You can also play against just one opponent via Xbox Live. Both Twist and Classic support all the aforementioned multi-player modes, so whichever game you’re best at, you can go online and prove that to the rest of the World.

Of course, there is also a scoreboard for you and your friends to work together a total combined score. So if you’re a bit of a lover and not a fighter, you can also work toward a more collaborative effort. Plenty to keep you occupied, then.

Diamonds are Forever?
Bejeweled Blitz Live is very addictive and the 16 Player Party Mode is a ton of fun with each of you lobbying for position on the high-score ladder! As multiplayer arcade releases go, this is one of the better experiences on Xbox Live and is a game that anybody can pick up and play. It’s a game where the words ‘One More Go’ mean ‘Twenty Minutes Later’ and you’ll still want to play again. No questions asked, Bejeweled Blitz Live is the definitive way to experience Bejeweled on Xbox 360, both by yourself and with friends. It seems hard to believe this originally started life as a Facebook game, doesn’t it?

One criticism I have, I would have liked to have seen a continuous play mode for Bejeweled and Twist featured somewhere in the game, perhaps as an unlockable, uncompetitive mode, as a continuous string of 60 second games can be frustrating and make you yearn for more time. That said, this is an excellent game and finally offers something the Bejeweled experience has been lacking for way too long; a solid, competitive online multiplayer!