Review: Dead Rising 2: Off the Record

One thing you can say for the 21st Century, we don’t suffer for a lack of Zombies. Whether you’re reading a book, watching a film, following a TV series or playing a game, Zombies are everywhere and they’re coming for your brains.

So, naturally, to keep things interesting, the entertainment industry has to try and keep Zombies as fresh as they possibly can (even if they do smell of shitty nappies and pissed-in pants). Popcap decided to make a game about Zombies, but added some plants into the mix. Seth Graheme-Smith decided to take Jane Austen’s classic novel Pride and Prejudice and give it a sprinkle of Zombies. Even Simon Pegg decided to put his own spin on things.

Let’s not forget Capcom and Dead Rising. Dead Rising initially seems as if it’s one mans struggle in a survival horror situation against a horde of Zombies; on the inside, it’s a bit of a different animal. What they’ve actually done is put you in the shoes of a character in a survival horror situation, and allowed you to tackle it however you see fit, using whatever weapons you can find, dressed up however you like. It’s this sense of freedom that’s made it such a firm favourite among Zombie fans.

That in mind, now Capcom are back with Off The Record, and are ready to put us to the test all over again. Is Zombie Fever still all the rage, or is this setting ready to start rotting away?

I’m going to the mall… wanna come?
Dead Rising 2 launched to some surprise. The protagonist fans of the series had come to know and love from the original game, Frank West, was conspicuous by his absence, and had been replaced by Chuck Greene, a single father forced to defend his daughter Katie from a ravenous outbreak of Zombies in Fortune City. Unlike the Camera-happy West, Greene is more of a mechanic, who can build weapons of mass destruction out of everyday items. While Dead Rising 2 was essentially the same game as its predecessor with some key changes, the difference in protagonist was difficult for some to accept.

That’s where Off The Record comes in. OTR is a spin-off of Dead Rising 2, but this time focuses on Frank West. The game is essentially a ‘What-If’ Scenario that places Frank West at the Fortune City outbreak instead of Chuck Greene. While this certainly sounds like it could be lazily executed, Capcom have done an admirable job in explaining West’s presence, and the build-up to him fighting off the undead mobs.

After DR1, West became a celebrity. He wrote his own book and hosted his own TV show. He was the man every woman wanted to know and every man wanted to be. Well, at least for fifteen minutes. Frank soon squandered his money and his opportunities, he became complacent and uninspired. Pretty soon, the luxury life he had carved out for himself came crashing down all around him, and he became broke and overweight. Fortunately, the realisation that he has lost everything dawns on him all too quickly, and in an effort to get his newly won life back, Frank desperately seeks out opportunity. That’s when he finds the Terror is Reality show.

In what will go down as one of strangest game openings this gen, Frank guest-stars on the show, his full fat-assed frame decked out in a leotard, as he competes in a Zombie Royal Rumble. Thinking that the exposure can only do him the world of good, Frank embraces the violence, smashing up his old brain-dead friends with steel chairs and sledgehammers, relishing every single second as if he has never been away.

Yet, when it is all over, West feels empty, and even after taking his prize money, feels as if he has lost all dignity. The thought of who he is and what he has become is more depressing than he had ever dared dream. However, just as he is about to go, he overhears two men talking, and exchanging a mysterious package between them. His intrepid reporter instincts taking over, West gets out his camera and starts snapping pictures, hoping for a scoop. Unfortunately for West, he is caught eavesdropping and jumped on by a group of henchmen.

It’s only after fighting them off, however, that West realises the Zombies of Terror is Reality have managed to get loose and are starting to terrorise Fortune City, but who has released these Zombies on Fortune City, and why? West takes up the mantle of Zombie Survival Hero once again, and endeavours to rescue the survivors, ensuring they remain uninfected and all get home safe and sound. 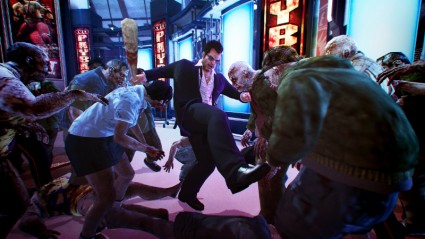 My anus? No, Uranus…
Off The Record is designed to be a fan service, there’s no doubt about it. Its Capcom’s answer to the disappointment fans felt when they didn’t get West in Dead Rising 2, and in that sense, Capcom have tried to tailor-make this to fans likes/dislikes of the series, built-in with a nice spin on the events of Dead Rising 2.

Costume customisation is as vast as ever and there seem to be innumerable clothing combinations that you can victimise Frank with. Pink Tutu and a Quarterback helmet? Sure, why not. Sneakers with a baby costume? Nothing is unimaginable..

Photography is also back in OTR. It’s the same as it has always been, take photos of your environment, and features the same bonuses as before. You can snap pictures with a Zombie and Survivors and have them feature under three different categories, Erotica, Horror and Outtake. Depending on how successful the photo is (how well it is zoomed, what it features etc) you will earn PP (Prestige Points), which can be used as experience within the game.

Unlike having to inject Katie with Zombrex, this time, you’ll need to inject Frank with it every 24 hours. If this is an aspect you didn’t like in Dead Rising 2, unfortunately, it’s carried over into OTR. What has been omitted, however, is the Terror is Reality mode. In its place, though, is a Sandbox Mode, which allows you use to your camera freely without losing any health. This is great if you want to complete challenges without interference. This also allows you to grind outside of the OTR campaign, and then come back into it with a tougher, more experienced Frank.

Dead Rising plays just as it always has. You control your character from a Third Person Perspective, making your way through various different parts of Fortune City (from Amusement Arcades, to Shopping Malls) fighting off Zombies, using just about everything as a weapon, from a foam hand to a sledgehammer!

The game also sees you trying to save survivors from precarious predicaments and working to a timeframe in order to survive and escape. What has been improved here, however, is the mission structure. This seems much easier to follow, and there’s also a map at your disposal so you can navigate the terrain much easier than you’ve been used to in previous games.

The checkpoint system is fairer than in previous instalments. It’s a far cry away from the original Dead Rising, and certainly makes the experience more manageable, but it does alleviate some of the tension that the series has previously built up for itself. If anything, this makes it more accessible for other audiences, but will probably be an annoyance for hardcore Dead Rising gamers.

There’s also a lot of fun things to do in Fortune City if you get bored of Zombie slaughtering, such as play on a virtual golf range, and even ride the bucking broncho! 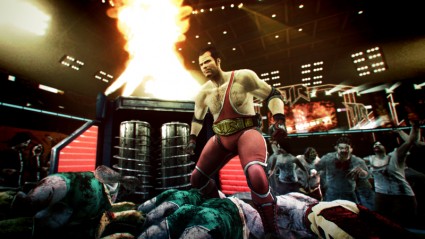 Frank is the Ultimate Warrior! Maybe not...

Zombie hunter… with a fat ass…
The graphics in OTR haven’t changed from Dead Rising 2 as the game runs on the same engine. It’s just as brutal and graphic as you remember it, and yet, still manages to play a great comparison between savage executions and cartoony humour. However, this also brings with it the same glitches and clunkiness that Dead Rising 2 had.

What you will notice, however, is Frank West. To suit the story Capcom have carved out for him, Frank is overweight and it shows, no matter what clothes you put on him. He’s absolutely out of shape, and is definitely not the same lean guy you remember from Dead Rising 1. It’s a great subtle feature Capcom have thrown in there, and one that helps to add further weight (gah…) to Frank’s story.

UuuuuuuunnnUuuhhhhh
Some of the voice acting is a little corny, with some lines followed up with overly pregnant pauses, and added exclamations when they’re not needed. Its typical Japanese style and it’s a trademark you’ll have come to expect from, not just Dead Rising, but many Capcom games. TJ Rotolo returns as the war winning Frank West, bringing familiar wit, charm and cockiness to the role. Both are a great combination, and, as a result, present a great lead role for the game.

The sound effects are as comical as they are crude. Cave in a zombie’s skull with a cigarette bin; you can hear the crunching and the squelching. Equally, if you slap them across the face with a foam hand, you’ll hear the wind whip. OTR does a great job of making you feel as if the weapon you’re using is having its designated effect.

If they were pals…
Chuck and Frank make a deadly Zombie killing team, and when they are together, the co-op actually works really well. It’s a lot of fun hacking through Zombies together side by side, working through the game’s campaign. This works similarly to Dead Island, in that you can join people’s games or they can join you as you go through the Single Player Game. On the whole, it works well, and generally isn’t a choppy or laggy experience. 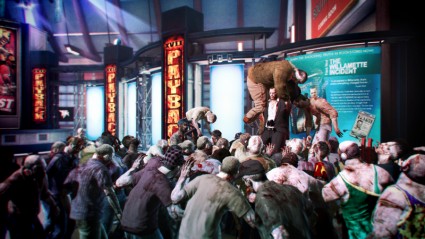 Get back you bastards!

Go West?
There are some changes between OTR and Dead Rising 2 that you should be considering as a fan of the series, but ultimately, you’re still in Fortune City, you’re still injecting Zombrex and you’re still fighting Zombies. Also, a lot of the issues that were in Dead Rising 2 have remained in OTR. Clunky controls and sloppy mechanics remain, leaving you to wonder why Capcom have ignored the discrepancies gamers and reviewers highlighted in DR2.

However, with a mostly new story, Co-Op, Sandbox and Photography, this still offers more than your conventional GOTY edition or 2.5 upgrade of a game. There’s still a wealth of content on the disc, but, ultimately, despite the extra colouring, this is still Dead Rising 2 with a new lead character and a new spin on its events.

If you’re not okay with that, move on. If you are, OTR will still make sure you’re well looked after, and keep you suitably entertained throughout. It’s still a shitload of fun being Frank West!