I’ll be honest: Dragon Age 2 disappointed me [if you remember, Debbie rather liked it – Andy]. I was a big fan of the original game, but found that its sequel fell quite short of the mark. Confining the player to a city for 80% of the game with only a few brief excursions outside, it became tedious deep into the second act. By the time you reached the end, you’d gone past the stage of caring. Really, I expected much more from the series, and from Bioware. It seems I wasn’t alone either; the outcry against Dragon Age 2 still continues and seems to outweigh the positivity at every turn.

Bioware have heard the feedback, and claim that they’ve been listening. Upon announcing the DLC, they said that they will be focusing on the things that people love about Dragon Age, and moving away from the foundations set by Dragon Age 2 which they disliked.

Now that I’ve got my hands on Legacy, I can tell you that it is definitely a step in the right direction…

The story takes place just before the events of the game’s climax. Right from the outset, Legacy starts you in the Vinmark Mountains outside of Kirkwall, which Varric describes as a ‘blank spot on the map’. Not long after reaching the mountains, Hawke and his followers are attacked by Carta thugs that say they need Hawke’s blood. With a possessed, far away look in their eyes, you may feel a twinge in the pit of your stomach, suggesting that Dragon Age has finally succumbed and produced a Carta zombie outbreak into its midst. 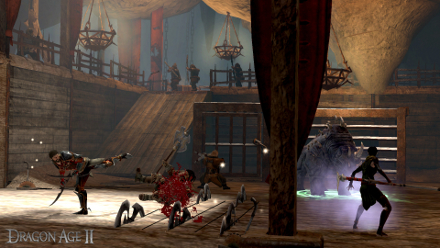 These thugs are working under the orders of a unique kind of Darkspawn by the name of Corypheus, and the blood of the Hawke line is needed to awaken this ancient evil from its long slumber. It’s up to you and your followers to explore an ancient Grey Warden prison, put an end to Corypheus, and learn unspoken truths about the Hawke lineage. All in a day’s work, then.

The DLC can be played at any moment after reaching Kirkwall, and is highly recommended to be played as early on in the game as possible, as a lot of the items you collect aren’t that powerful, but would be a great benefit to you as you start out. In Legacy, you can also craft a powerful, unique weapon which can be used throughout the rest of the game. The weapon can be customised by you as you play through the DLC, adding elements such as frost damage, added critical strike abilities, faster health regeneration and more.

One of my major issues with Dragon Age 2 was the overly familiar environments and set pieces. It was part of the reason I felt disenfranchised from the story and the characters, because it felt like all I was doing was treading the same ground over and over, and never exploring. Ultimately, the game lacked a sense of adventure for me. With Legacy, the environment is so dynamic that you don’t even think about repetition, and as such, I was naturally woven into the story. There’s also a sense of mystery ravelled up in all of this, which keeps you bound to your control pad. 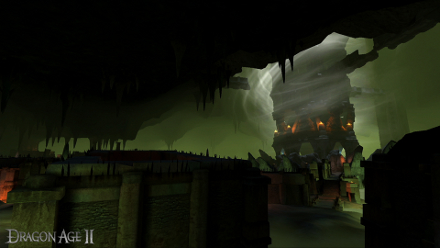 To get the most out of Legacy, you should have Varric, Bethany/Carver and Anders in your party. Each of these will add a lot more detail, due to their background and history with both the Hawke character and the environment. Whereas Bethany or Carver will talk to you in detail about family history, Anders will teach you more about Grey Warden history, whilst starting to feel the surroundings of the prison having an effect on him.

Part of the problem for me is that whilst I enjoyed the banter between party members (Isabella and Aveline, in particular), I didn’t care for many of the characters in Dragon Age 2, including Hawke. As I played DA2 I kept thinking to myself, “why can’t I play with the character I created in Origins?”. Even after sixty hours when I finally finished DA2, I found myself disengaged and unfulfilled after taking a journey with these characters, something I haven’t felt from a Bioware game before. Let’s put it this way; Hawke is no Shepard, and because Legacy is so focused on Hawke and his backstory, it didn’t really resonate with me as perhaps it could/should have. As this was a character I wasn’t duly invested in, I wonder if some of the impact of the DLC was lost on me.

That being said, I enjoyed Legacy. Yes, it’s short, and yes the story is limiting, but ultimately, I had more fun with the few short hours I spent with Legacy, than I did for some thirty hours spent in Dragon Age 2. Bioware have listened; they’ve gone back to what was good about the Dragon Age series, and delivered. Whether it is worth 800 points or not is up to you, but it definitely made me feel more positive about the future of the Dragon Age series after playing it.

Now all Bioware have to do to make me happy is release an add-on for Dragon Age 2 that is akin to Awakening in size and depth. That may go some way in soothing the wounds of disappointment I endured back in March.