Besides the initial offload of fitness and sports games, Kinect quite surprisingly received a beat-em-up as a launch title. The game is set out on the streets and sees your character competing against a slew of different opponents, each with differing strengths and weaknesses. Without the use of a joypad and using your whole body as a controller for a beat-em-up, throwing punches, knees, headbutts and kicks, ducking and weaving to evade strikes and counter attack, that must be awesome, right? How could that be bad?

Fighters Uncaged may have a gritty title that commands attention but the game is very difficult to take seriously when it clearly doesn’t treat the technology it is catering to with the same respect. The game is founded on some clever concepts yet it is meshed and marred with poor execution. Whatever you do, don’t allow Fighter’s Uncaged to dictate to you what Kinect is capable of, otherwise it’s entirely likely you’ll never want to use Microsoft’s peripheral again. This is definitely not one for the showcase…

When I throw a knee, I don’t expect to headbutt someone in the face, or when I’m kneeling down in front of the sensor, I don’t expect my character to just stand there and get his face and body made black and blue from every known strike under the sun. I mean, for god’s sake, the training in of itself was an achievement (something you don’t even unlock an achievement for I may hasten to add!). Just to conduct moves that would surely seem simplistic, such as a headbutt or a low kick are made into an utter mess when the game tries to replicate your actions.

It’s not just the fighting that’s poor though, did I mention how awful it is navigate the menus in the game? When you see how seamless Kinect Adventures and Sports is, how precisely it follows the movement of your hand, then you get the stunted, delayed reactions of Fighters Unleashed, you already get a very early indication of how bad the whole experience is going to be. I’m not even lying when I say that the most responsive part of the game is when you throw a punch toward the screen in order to load the menu screen. For some reason, that’s motion perfect! If only AAA Studios had used that as a template of how to build their game from the ground up, they may have actually got this one right… 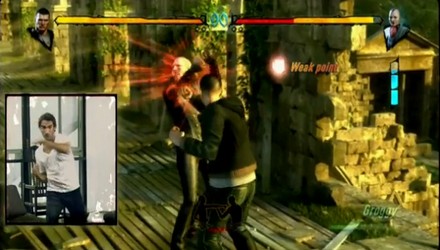 Mix up your strikes!
Each fight is viewed over the shoulder of your fighter and is situated on different areas, on a ship, in a park, in an alleyway and more. You have three different levels of strikes, long-range, mid-range and close-range. You’ll need to use ranges effectively in order to win each battle as different opponents will have different methods of attacking in order to discover their ‘weak spot’. Your strikes will differ depending on which range you’re throwing them from. In order to change your range of attack, you’ll need to perform a designated move in order to change your stance. Except that sometimes, the game will even confuse itself with the stance changes and thrown strikes and continue to dig a deeper hole for itself.

Some people might be able to forgive the controls and enter the actual gameplay with an open mind, but even that is horrendously dull. The game starts you at the bottom in league 3 and has you fighting against opponents of a similar ilk, each with their own strengths and weakness. Your job is to utterly annihilate them to score enough points to qualify for the next league. For example, a Samoan type warrior cannot be hit at mid-range as he will trounce through you with overwhelming power, so you’ll need to keep a long-range from him and assault him with leg and body kicks. The faster you can learn the method to defeating him, the quickest time you beat him in and the amount of health you have left at the end, count to scoring you points within the league and toward progressing to the next league.

All this being said, some creativity has gone into Fighters Uncaged, using the ranges for tactical advantages and giving each opponent something different for you to fight against. Although, I think all the ideas that have gone into the game have actually hindered and over complicated it. It may have even been better for the developers to merely create a fighting game in its most basic form, getting the controls and actions narrowed down to precision and then tried experimenting when they are more familiar with the tech.

What’s frustrating is that the game will sometimes perfectly resemble the actions you’re performing and gives you a twinge of excitement, thinking that you’ve finally sussed out the exact motions you need to perform in order to ‘get in the game’ but then quickly reverts back to its poorly coded form and replaces a kick for an uppercut, dashing your hopes completely.

The game will make you sweat, something perhaps it should be credited for. It can be used as part of a good workout routine, but I found it was more the strenuous steps I was putting myself through just to get the game to recognise me doing an action during the training. You could even say that you give yourself the work out by trying to get the game to respond to you. Perhaps people could put Fighters Uncaged into their fitness regimes for half hour and label it under ‘Figuring out the fucking controls’. It’ll definitely serve as a nice counterbalance to Yoga and Press-ups!

Frankly, if you make it past the training, you’re going to be doing a lot better than most. I spent nearly an hours worth of play time trying to finish it all, because no matter how closely I followed the steps, some of the moves just would not execute and my character would look like a complete and utter douche attempting to be my ‘mirror image’. It’s an achievement in itself to make it onto the streets in this game! 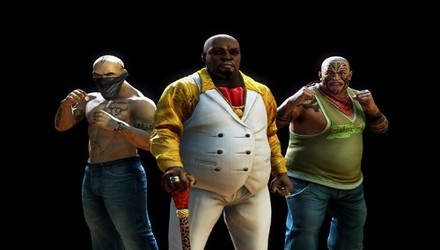 Costume check?
Surely the graphics can save the game, surely they’re going to redeem the game from its bargain bin fate? Well, nope…

The game looks and feels like a last-gen, bottom feeding PS2 game rather than something you’d fire up to show pride and joy in your Xbox 360. The graphics are clip-happy, blocky, and generally very ugly to look at. Sure, the cast of fighters aren’t exactly supposed to look like a head count of an FHM magazine photo shoot, but that’s no excuse for trying to minimise cost with something that looks like it should have a 50p price tag slapped on it.

Honestly, the graphics are not the games redeeming feature. Awkward dodges, flimsy blocks and disjointed punches and kicks really do put this games’ engine to shame…

Scream like champions do!
Hell, your character doesn’t even sound like a fighter, he sounds like a Oxford Graduate that should be taking part in the rowing championships against Cambridge next year. During battle, your character will narrate you through the battle in the past tense, talking to you about possible openings and weaknesses in the opponents stature and fighting style. It’s quite a creative approach, granted and it does show that at least some thought has gone into the game’s development process, but when you’re actually trying to execute aforementioned attacks and follow your instructions, this is where the game just completely falls apart at the seams. Rule 1, if you’ve got a lot of great ideas and you want to implement them into a game, at least try and make the core mechanics of aforementioned game play properly. You know, like, get the game to recognise what you’re actually doing, instead of making it up for its own amusement

Your fighter (who sounds like a descendant of Prince Charles) isn’t the only poor sop, the rest of your opponents either have the most awful lines in the history of a beat-em-up that invoke about as much fear into you as a damp mop without the wooden handle or the voices are just so terribly mismatched, you’ll begin to wonder if you’ve stepped through the Looking Glass and entered a parallel universe designed for the sole purpose of creating utter shite.

Not only does the whole cast sound like a bunch of D-List Amateur Wrestlers, but to make matters worse, the game tries to drag you down with it and gets you get in on the act! In order to activate your power-up bar to perform your special finishing move, the game forces you to scream to power up your meter before you can do a special move. Yeah, I have to stand in my living room, give off a roar before I can place one foot behind the other foot and do a jumping round house kick finisher. While the game should be commended for attempting to use the voice capabilities of Kinect (something not all the launch line up can attest to) it’s a pointless gesture that makes you feel like one of the animal cubs in Kinectimals, rather than a savage street fighter who shows no mercy!

Even the Indian cultural styled music seems out of place, ugly and cringe-worthy to listen to. Is there anything this game can do right? 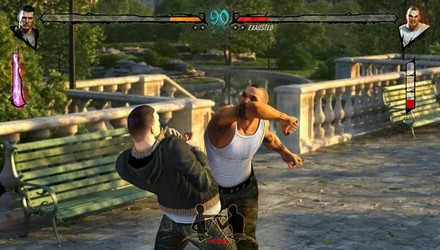 El Luchadore ist swinging on yo...

To tag team… or not to tag team…
Not only does the game not support local multiplayer, (although considering the mess of code that’s in there, this is probably a sensible thing for the sake of your furniture and general health) but it doesn’t even have online support? What?! In 2010, no online support? We’re in an age where developers are tacking online modes on games for the sake of it, and the one game that could desperately use such a feature to help stop it from spiralling into ‘I’m a loser’ territory, guess what? It doesn’t have one. Frankly, it’s pretty inexcusable and does little for the game’s already flailing reputation. Sure, there are online leaderboards where you can compare your scores with your friends and the rest of the World, but only when you reach a certain stage in the game. Before that you’re just going to have to gloat over your own scores and brag to yourself.

Throw away the key?
Ubisoft should feel sheepish putting their name next to this title as it is certainly not indicative of the quality they’ve been producing over the last few years. That being said, this game has sold incredibly well as a launch title and is guaranteed to make a profit, which means, it’s inevitably going to receive a sequel. Although, if you’re reading this review and you’re thinking about buying the game, seriously, don’t. Don’t waste your time looking for an authentic fighting experience, you won’t really find it here. Don’t expect to find Kinect’s version of Street Fighter, this one is in a category all on its own…

I’ve worked for This is My Joystick! for over a year and have never had to dish out this award until now. However, I feel I cannot find a redeeming feature in this game to stop me from giving it out this time. Congratulations Fighters Uncaged, you’ve achieved what no other game has in my journalist career…