Mobile games are being developed as Kinect killer apps. Who’da thought it? Halfbrick’s Fruit Ninja started life as a simple touch screen game on your phone. Simply slice your finger across your touchscreen to take out a piece of fruit, and do this as much as you can before the time limit reaches zero.

Of course, Kinect ramps this up to the nth degree. Now, you’re not just using one of your fingers; you’re using both of your arms, but how does the experience translate?

So, we know that Fruit Ninja is well suited for bus trips and lunch breaks, but how does it stack up when you’re stood up in the comfort of your own living room, flailing your arms around like a dog digging for a bone? How does it fare when you’re playing for extended periods on the big screen? Pretty well, actually.

The premise of the game is simple. Various types of fruit fly around on the screen, and it’s your objective to slice them with your hands (although, you’re better off thinking of them as blades). Cut a piece; that’s brilliant, but you get combos for slicing more than one piece of fruit at the same time, also improving your score. It’s all so very simple, isn’t it? Except that you need to be mindful of bombs that float alongside those succulent gifts from nature, and that if you hit one of those bombs, you’re either going to lose points, or get a game over screen, dependant on the game mode you’re playing.

In light of recent times, I can understand if the premise of this game ignites a spark within, and you’re worried about playing it for fear of going completely off the rails. If the very thought of dessicated coconut boils the blood, and sends you into uncontrollable outbursts of rage that could prompt you to go rioting on your local city streets and attack every fruit stall you see, then you may be relieved to learn that a balance has been struck; this is also an educational game. As well as refining your martial arts expertise and showing you the innards of many fruits you’ve probably never dared to explore, Fruit Ninja Kinect also happily teaches you fun fruit facts at the end of each round. Plum skin has a laxative effect. An apple is 25% air; that’s why it floats so well. Did you know that? See; not all bad, right?

Apple pips in yo eye!
The game has various modes for you to tackle. Firstly, vintage Classic Mode. The idea is to slice as much fruit as you can, without allowing any to escape your arms of doom. If any fruit leaves the screen without being cut, you lose a life. You only have three lives to start, so if three pieces of fruit get away from you, it’s game over! Don’t be too disheartened though; you can earn more lives every time you score 100 points. You also need to be mindful of any bombs that pop up. If you slice one of these bad boys, then it’s insta-gameover. No second chances. That’s it: KA-BOOM!

Arcade is a timed mode, except bombs only knock points off your score rather than ending the game, and you will be playing with power-ups. There are three types of power-up at your disposal. First up is the Freeze. This is self-explanatory; it freezes the fruit on the screen, making it easier for you to slice and dice. The second is Frenzy. This causes loads of fruit to come at you from both sides, forcing you to go all windmill on those Kumquats! Finally, Double Points, which gives you… double points. This is probably the most entertaining mode in the game.

There is also Zen mode, which is a timed effort and sees you cutting fruit at a relatively relaxed pace. No real pressure here.

Finally, there’s a Challenge Mode, which gives you a set amount of targets you’ll need to meet. For example, Score 150 Points in Classic or 400 in Arcade. Naturally, the requirements get harder the further you progress. 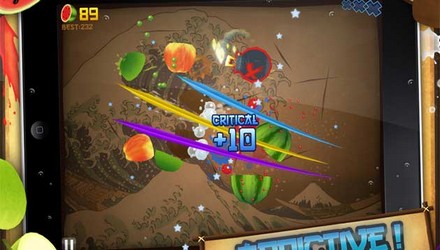 The game also rewards you for certain requirements as you go along, and allows you to unlock items in the Sensei’s Shack. So, for example, if you hack your way through 100 bananas, you can change the look of your blade on the screen from a silver shiny one, to a glowing red lightsaber, or perhaps even a bamboo shoot! You can also customise the backgrounds in case you’re wondering what a fruit stain on a Samurai’s robe looks like…

Unfortunately, this does become very limiting. You would hope that considering the game is a measly 69p on your phone, that by spending £7.00 on it, you may get a bit more bang for your buck. Not so. It’s a lot of fun, and suits Kinect very well, but only in very short bursts.

Are you looking at my melons?
Don’t worry, all your favourite fruits are here: apples, bananas, strawberries, kiwis, and coconuts. The game hasn’t missed a chance to introduce the player to all graphical forms of slicing a piece of fruit in half, and seeing what it looks like on the inside! You can even splat the fruit on your screen for added effect. It’s all done in a fancy comic-book style, which absolutely fits the ambience of the game, and will be instantly familiar to anyone who played this on their mobile. It just looks bigger and better.

Hiiiiiii-yah!
The sound effects go from a nice authentic Japanese theme to “splish, splash, splat, squish, plop” very quickly. The sound effects, much like the graphics, are all done in a comic book style. As you’d expect, they’re completely overdone. It’s reminiscent of watching a Japanese Kung Fu Movie in some ways; all overstated, and equally as enthralling as it is hilarious. There’s no over-arching storyline to explain why a ninja decides he has to destroy the entire world’s supply of fruit. It doesn’t go to any lengths to produce any characters, save for a Sensei, who decides it is imperative we know as many facts about fruit as is humanly possible. In fact, half the time, you’ll probably be listening to yourself making ninja-esque sound effects while you’re swiping at fruit. That, or screaming as tear your rotator cuff to shreds! 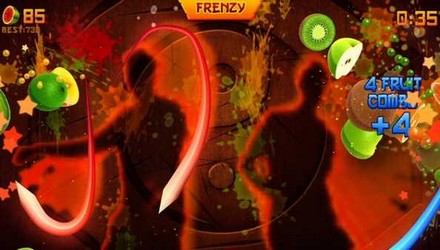 Banana split!
The game does boast a multiplayer; unfortunately it is not all it should be. There’s a Battle Mode which sees you and a friend stand side by side and um … cut fruit. Highest score wins. Obviously. There’s also a Team game, where you both contribute to one score and try to get as much as you can. Fruit Ninja only supports two people at one time, which is just as well, as otherwise you’d probably end up chopping your friends rather than that over-sized watermelon floating on the screen!

Unfortunately, online has all but been ignored. This is a surprising omission, and one that does make this package seem even more overpriced for what it is.

A healthy choice?
Despite its shortcomings, at a time when good Kinect games are quite sparse, you really can’t go wrong with Fruit Ninja Kinect. Yes, it’s probably overpriced at 800 points. Yes, it is quite short-lived and is better served for mini bouts of gameplay, but it is fun. It makes good use of the Kinect peripheral, it can actually serve as a decent upper body workout, and it definitely stakes its claim as one of the first true arcade games for Kinect that encourages a ‘one more go’ appeal.

There’s a lot of satisfaction to be had comparing your scores with friends, and interacting with them via social media through the game. It’s just a shame that online play wasn’t included with Fruit Ninja, and that more modes weren’t added to help make the price point seem more of a bargain. Regardless, commendable effort from all involved recreating a fun mobile game, into a definitive Kinect experience.