The Professor Layton craze has swept the nation, and it shows no signs of slowing down. So, naturally, this has brought along with it many other characters that dare to try and compete with the Prof, claiming they can do a better job of algebra, arithmetic and general puzzle solving than him.

There’s this one girl, though, who thinks she’s especially awesome; May Stery. She thinks she’s got it all figured out, and she reckons she is so clever that even Newton asks her for advice on the laws of gravity! Kids, eh?

Refusing to allow myself to be led astray by such bold proclamations, I tasked myself with finding out just how awesome she is, and investigated May’s Mysteries on Nintendo DS.

Enough bragging woman! Time to find out if your brain is a slushy clump of slush, or if this is a compact computer that makes the iPad look like iPoop!

May’s Mysteries starts out like every other game; May and her brother Tery are stood in a hot air balloon, that is taking its maiden voyage from a town called Balloonville, navigated by a man named Renee. Renee and Tery have worked tirelessly on this balloon, making it absolutely invincible and all-powerful, so that it is capable of travelling the world. Both assure May that this balloon is fail-proof, and nothing can possibly go wrong. However, when a big storm hits, the balloon goes wrong (bet you didn’t see that coming!) and starts spiralling out of control (yes, even the great Renee is unable to steer past lightning bolts). After being hit, the balloon sinks to the surface, gets partly tangled up in a tree and throws its passengers to the ground, rendering them unconscious.

When May comes to, she notices that her brother has left a note for her to say that he’s gone exploring, and Renee is nowhere to be found. While we assume Renee is searching high and low for a bed he can go hide underneath when he realises they’ve crashed into Dragonville, the very mention of Dragon has probably got Tery so excited, that he’s decided to go and hunt one to take as a pet. Fair play; that would be better than a balloon, wouldn’t it?

May, feeling overprotective of her younger brother, decides to look for clues as to his location, but also to find out more about this unique village. However, as she starts to peel back the layers, she encounters puzzles that require solutions. And when she gets deeper into the town searching for clues, she meets some of the local population, and quickly realises that in order to get information from them, she needs to do them a favour in kind.

Tit for tat, and all that. 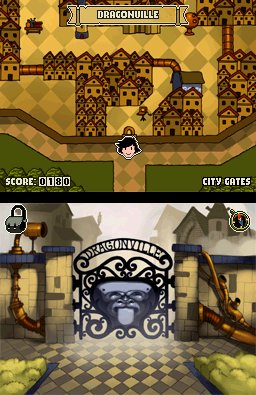 A solution to wonder
May’s Mysteries is the love child of Layton and Myst, but looks like it spent lengthy vacation time in the world of Coraline. The game is controlled via the touch screen, and is played from a first person perspective. You move from screen to screen by touching a directional arrow, and while you can go back and revisit places, the game is quite linear, so you’ll never find yourself confused as to where to head next.

The top DS screen gives you a mini map, showing you where you’re located and where you need to go, but it also gives you an overall puzzle score based on your performance throughout the game.

Whenever you encounter a puzzle, the synopsis is explained to you in the top screen, and then you interact with the puzzle through the touch screen. The puzzles vary considerably, including placement puzzles, word puzzles, matches, riddles, rhythm games and more. You’d better be coming into this with a mind for versatility, otherwise you’ll end up throwing your DS out of a window.

You are offered two hints per puzzle, and up to ten hints in total (so that means you can only get hints on five puzzles from the outset), but despite being given clues, you will always need to solve the puzzle yourself (although you can skip puzzles if you get really stuck!) If you run out of clues, though, don’t be too concerned; you can always earn more hints if you play bonus puzzles, given to you as you progress through the story. These can be entirely ignored, completed recreationally, or, if you’re a completionist, you can finish them all to add to your overall score. You also earn points based on how well you have performed on a particular puzzle, which will then go to your overall score at the end. For example, if you didn’t use any hints and completed a puzzle in your first attempt, your score will dramatically increase. 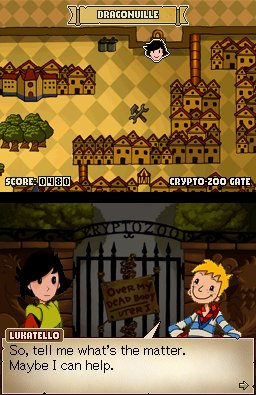 Soaring for success
Graphically, May’s Mysteries is pretty impressive. The cut-scenes in the game are fully animated. It’s almost like watching a cartoon movie unfold, and is all hand-drawn. As I mentioned before, the graphical style would be familiar to someone who has watched Coraline, but is recreated in a way that looks as if it has been crossed with Dora the Explorer.

Wonderfully, Dragonville is an excellent fit for May’s Mysteries, as it is indeed a mysterious place filled with old buildings, enchantment and wonder. As a location, Dragonville offers a lot of intrigue for a player; V5 Play have certainly done a great job there. The characters are also such a diverse bunch, and you can clearly see a lot of imagination has been invested in the project, with their wacky outbursts and appearances.

Surprisingly as well, Dragonville isn’t the only place you’ll get to visit. The game is spread out over four different worlds, each a further showcase of V5 Play’s attention to detail; all quite different from the previous. I am genuinely impressed with the imagination at play here, despite the rather uninspiring names each town has been given.

In-game, you don’t see May unless she is interacting with another character. These are mostly unanimated (think Phoenix Wright and Hotel Dusk), although dependant on the line of dialogue they’re about to deliver, their expression changes. 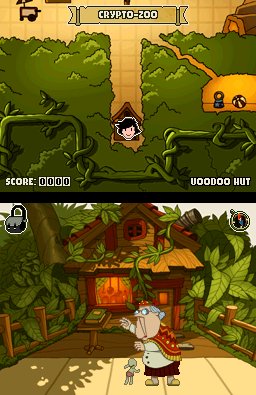 Spring is a great season
All dialogue in the cut-scenes is spoken, and generally comes across as acceptable and not too annoying. Granted, some of the spoken words are a little forced, and sometimes overacted. On the whole, though, I didn’t mind most of the voice actors (with one or two exceptions!), and felt they delivered the lines well enough that I wasn’t beating my head against a wall. Nice work!

Unfortunately, the same can’t be said for the music, which quickly becomes tedious. It’s quite soothing to begin with (for the first minute!) but quickly turns irritating and irksome. The problem lies in the pieces of music being too short, and always on continuous loop. In the end, I just turned the sound off as I played through the puzzles as it became more of a distraction for me, as opposed to a way of helping me focus. With a puzzle game, the music is certainly a very tricky thing to get right as you don’t want to irritate the player, but you do want to try and keep them composed. Usually, musical pieces can blend in the background, and you can find yourself tuned out from them because you’re so focused on the task at hand. Unfortunately, I couldn’t say the same for May’s Mysteries. It was more than noticeable at times, and that was too much for me.

The same rule applies to tapping things on the touch screen when playing a puzzle. The sounds that come out of the DS border on the infuriating, and are the last things you want to hear when you’re trying to figure out a particularly taxing puzzle. Not cool, V5 Play! 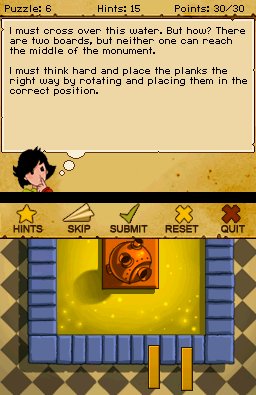 Balloons for the win?
Despite my sound frustrations, however, May’s Mysteries is a very good game. It’s a comprehensive package, that offers a lot for the small fee you pay (it is said to feature over 270 mini-games and puzzles), and it does last you about 20 hours, dependant on how quickly you solve each puzzle. Surprisingly, the story also holds quite well, and is as action-packed as it is endearing.

It’s not for everyone of course, and if you generally dislike Professor Layton, Puzzle Agent and games of that ilk, you’re better off denying this ever existed. If you’ve never tried them, this is as good place as any to start.

I found May’s Mysteries to be an entertaining, solid, handheld game. It can definitely make the train, coach and plane journeys disappear quicker than you can say: “Does that girl have black dots for eyes?!”