It’s 1992 and you’re eleven years old. You’re at a friend’s birthday party, and you’ve had a belly full of jelly blancmange, crisps, cake and sandwiches. While the parents clean up, your friend excitedly tells you to come up to his room and play his new game. It’s Mortal Kombat. He’s absolutely too young to play the game (as are you, by the way!), but d’ya think he cares? Heck no!

So, there you all are, a group of four, cramped up on a small, single bed, huddled around a 12” TV, passing a SNES pad around. There’s the one friend who wins every fight and boasts about it (a lot), the one who doesn’t know how to throw a kick, the one who screeches annoyingly when he loses and thus, always has his go skipped, then there’s the one who knows how to do a fatality and asks for everyone to ‘let him win’ so he can show them. After all, he’s the one with the cheat guide that may as well be the 20th century equivalent of a Googlewhack.

The Mortal Kombat series does bring about some fond gaming memories for me. It was one of the first franchises that was bold enough to push boundaries and rattle cages, but it was also complemented by raw aggression and fluid gameplay. I spent quite a bit of my youth (when I may possibly have been underage… *ahem*) playing and enjoying these games.

Back then, you could quite easily have paid £60 for just one of them. Now, it’s 800 points for three. The question we ask ourselves, fifteen years on, is it even worth that?

You may be deluded into thinking there isn’t much of a story to the Mortal Kombat series; actually, they’re dripping with lore. Sure, it all boils down to one fighter against another in a battle to the death, but each has their own back story and reason for being there. The tournament itself has been setup with dual purposes and those who orchestrate the tournament aren’t one-dimensional wonders, either. The series is set in a fictional universe, comprised of six different realms; the first Mortal Kombat game being set in the Earthrealm.

Seven hometown combatants enter the fray, with the prize being the continued freedom of Earthrealm, which has been forced unto the mercy of Shang Tsung and his four armed associate, Goro. While each combatant is mighty in their own way, against such other-worldly entities they find themselves quite overmatched. Fortunately for them, the Thunder God, Raiden, is watching over them, and having seen enough of the antics of Tsung, helps Liu Kang defeat the diabolical duo and win the tournament, preserving Earthrealm for a little while longer.

However, we learn very quickly in MK 2 that the ultimate power does not reside with Shang Tsung. Shao Kahn (not to be confused with that tiger from The Jungle Book), the Outworld Emperor admonishes the failures of his subordinate and is on the verge of executing him. Shang, however, comes up with a cunning scheme that will see the Earthrealm warriors lured into the Outworld to, once again, compete in a Mortal Kombat tournament. Accepting the proposition, the Outworld Emperor lets Tsung live and beckons the Earthrealm warriors into his realm, giving himself and his followers a home-field advantage.

While the core of the game still emitted the same ambience of its predecessor, MK2 managed to feel like a different experience altogether. The landscape felt so much different with otherworldly environments like acid pits and creepy forests, and the game introduced Babalities and Friendships, instead of just openly executing your foe. You were also able to play as Outworld characters such as Baraka, Kitana and Mileena.

It was MK3, however, that really changed the ball game, with its sub-plots and gameplay mechanics. Having been defeated by Liu Kang, Shao Khan, not one to accept defeat easily, finally pulls the trigger on a plan he has been brewing for 10,000 years. Shao Khan’s love, Sindel, died at a very young age, and Shao (being a bit of a softie] has decided that he wants her back for cwtches [look it up, I had to. It’s Welsh, apparently – Andy].

Summoning his Shadow Priests and Shang Tsung to do his bidding, Shao Khan has Sindel resurrected in the Earthrealm, enabling him to cross dimensions and claim her. However, the act merges both Earthrealm and Outworld together, and almost instantaneously, causes humanity to lose billions of souls. Just in the nick of time, Raiden once again interjects, managing to preserve a select few. Those that remain form a coalition in an effort to remove Khan and his forces from Earthrealm.

While this served as the main story for MK3, each of the characters within MK3 had lots of side stories going on, which made the game even more rich in content and intrigue. The game also introduced a run feature, combos had a much more prominent place within the MKverse, and Animalities and Brutalities made their debut.

Neither of these wants an acid bath, I can assure you...

Test your might!
So, how well do these games still play? Generally, very well. They’re everything I expected them to be, but nothing more. All of the ports feel responsive to my use of the Xbox pad, and there doesn’t seem to be a lag or delay in the character’s reactions. Sure, MK1 looks a bit dated now, and if you weren’t around when the game was first released, you’re probably not going to want to play it now, but for people like me who are rocking the pipe and slippers look; this was a really sweet trip down memory lane!

Also, don’t bother with the analog stick, really, just forget its there altogether. Stick with the D-Pad and you’ll have a better time with the MK Kollection.

The game offers you unlimited continues as default, now (although you can alter this) but the difficulty curve of the games is still immensely hard, so much so that it sometimes feels like it borders on cheating. The enemies seem to scale difficulty, suddenly coming alive when they’re about to be killed and destroying you (even on the lowest difficulty), a difficulty scale that goes across the board on all games (although UMK3 seems to be the most balanced). Oh, and yeah, Goro is still an absolute machine that will rip you a new asshole!

I’m happy with the placement of all the controls, although felt that using right trigger for block was peculiar, and even a bit awkward. It always seems to be out-of-the-way when you’re in the middle of battle, and by the time you’ve got your finger on it, the enemy has already pounded you through the floor. 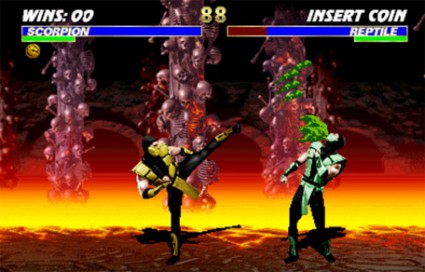 He'd been chewing on grass for five hours just to get it that colour...

Blood … delicious blood!
These games are over a decade old and have not been given the spit and polish HD treatment. How do you think they’re going to look? They can’t even go fully widescreen as they’re so old, and so the sides of the screen are emblazoned with some sort of decor to fill in the gaps. In many ways, I’m glad Warner kept the game authentic. I’ve seen some developers use HD on the same engine the game was written on to try to make their game seem more modern, where they’ve actually made the game look worse. At least MK is honest about its roots and isn’t trying to be a 60-year-old battle-axe, dolling herself up to be a 21-year-old Prima Donna. An image, as I’m sure you can conjure, that would not be best suited for her appearance.

You can smooth the graphics out a bit to try to make it look less rough around the edges, but, especially in the case of Mortal Kombat 1, it actually makes the game look worse, giving the Kollection a kind of ‘Hey, I emulated this on my PC’ feel.

The fatalities are all there in their gory graphic detail, from ripping arms off an opponent’s body to warriors morphing into dragons and eating them whole. Even if the graphics are bitty and grainy, you can still see why this game was the epitome of controversy just a few years ago. 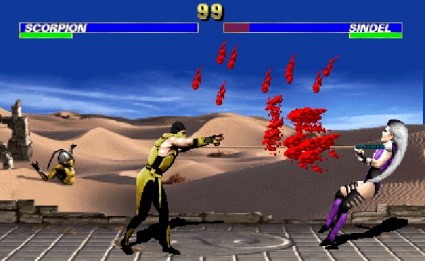 Scorpion has found an effective new technique for pulling women.

Toasty!
Just like the graphics, the sound hasn’t really been remastered, and so it sounds last-last-last gen, but it all works in with the ambience of the retro feel these games have set out to deliver. The wails, screams, shrieks and grunts are all intact, as is the gravely voice of the commentator who commands you to finish your opponent, glorifying it with a title for the punishment of your choice.

Oh, and Toasty Mc Toasterson still pops up when you do an uppercut. Nothing has been cut here.. 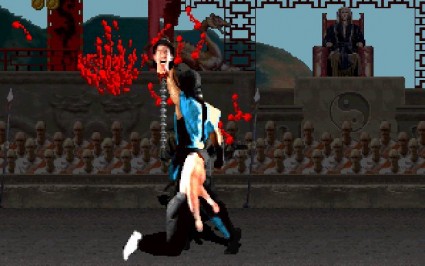 Online Kuntery!
For the first time, you can play the Klassic (oh c’mon, I had to…) Mortal Kombat games online, as well as locally. As groundbreaking as this may seem for retro enthusiasts, it’s about as awful as you’d expect. In fact, it feels as if you’re playing on a dial-up Modem half the time. The stuttering and starting makes most fights unplayable, so one second you can be at the other side of the screen, the next, in someone’s face, smattering yourself with their blood.

Unfortunately, playing this online is just not worth the bother, despite however long you may have waited for this moment. A shame, perhaps, but also to be expected. These games were never designed with an online focus.

Local, however, remains as fun as ever, and is probably one of the reasons why you’re even konsidering (shoot me…) a purchase.

Kontinue?
If you’re a retro enthusiast, and at such a bargain price, I can’t see a reason not to justify a purchase of MK Kollection. Sure, the online component is a flunk, and the game doesn’t marry up well with modern technology, but that’s because these games are coming from an era where such things were mere hallucinations. As ports go, this one ain’t half bad.

MK Kollection was a great trip down memory lane for me, and well worth the 800 point asking price. I even broke out the blancmange for just such an occasion!