Westerns, just like The Beatles and King Kong, seem immune to scrutiny, and have no problem standing the test of time. They’re just as loved now as when John Wayne first saddled up and roved the barren desert wastelands in search of outlaws and justice. Last years Red Dead Redemption certainly helped to prove just that. However, while this may or may not be the last time games will indulge in tobacco spitting and chases on horseback, it certainly isn’t the first.

In fact, one of my favourite games from last gen put a completely new spin on the concept. In it, you could track down bounties, dead or alive, and claim reward for your efforts. All done, in Oddworld’s unique and quirky style.

Sounds fun, right? Totally justified for a remake. However, is Stranger’s journey to HD a welcome embrace, or one that should have stayed a legend?

Gotta get to… that there… bounty store

The game unfolds with an enigmatic, well-armed stranger, taking down a string of outlaws then waltzing into town, claiming the bounty on their heads. They’re not complaining, the town is clearly in need of aid with the amount of cut-throat vigilantes on its doorstep.

However, while his actions seem noble, our Stranger has his own reasons for undertaking the guise of a hero. Sure, the moolah is nice, and allows him the luxury of buying all the whiskey he could ever want to douse, but there’s something our Stranger isn’t sharing with the townsfolk, and certainly not his enemies. He needs to raise a large sum of moolah for an operation that will save his life. What that operation is, he’s not even sharing with us, but he is obviously in desperate need of it by running in to gang hideouts guns-blazing.

For all his menace and reputation, the Stranger cannot even get the doctor to drop the price due to the equipment required for the procedure. So it is, the Stranger pays regular visits to the Bounty Store to see who he has to take down, his own inner body clock continuously ticking away. Will he raise the amount required in time? 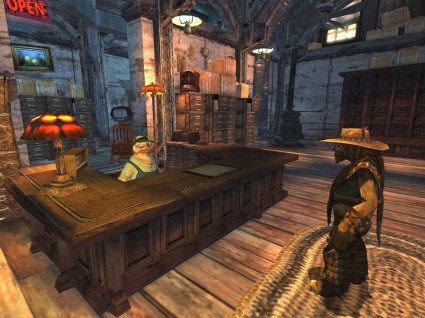 Going for a mosey!

That outlaw bothering you, ma’am?
Stranger’s Wrath makes full use of both first and third-person perspectives. Most of the time, you’ll be looking over the shoulder of Stranger as he runs around the environment, but you’ll also need to enter first-person view to engage in combat with the outlaws. It’s one of the few games that does a good job of blending both perspectives well, each seeming equally important to playing the game.

However, that’s not the major reason why Stranger’s Wrath is unique. In battle, Stranger has a double-barrelled crossbow, with the opportunity for you to customise the type of live bullets (yes, I said live!) he fires. Each barrel can fire a different bullet, and all of the bullets vary from one another, falling into categories of destructive, fatal, stun or capture. So, depending on the type approach you’re taking, you’ll need to consider exactly what it is you’re firing.

For example, in one barrel you may equip the Chippunk bullet, which attracts enemies towards it when fired. Then with the other barrel you could fire a Bolamite, tangling up the distracted enemy in webbing, making it easy for you to capture them unharmed. Once they’re tangled, you can then run up and capture them ready to take back to the Bounty Store. On the other hand, you could just fire off a Stingbee from long range, sniping outlaws with a fatal blow.

There’s even opportunity for you to upgrade your bullets, making them more powerful in battle. Stranger’s Wrath allows you to play the way you see fit. Sure, you earn more moolah for bringing in outlaws alive at the Bounty Store, but if you’re having more fun blowing things up and leaving a trail of corpses, that’s okay, too.

Another thing that’s unique about Stranger’s Wrath is that in order to replenish your stock of bullets, you actually have to catch them. Using the Electrobug when it’s fully charged, Stranger needs to hunt down live animals and insects scuttling around on the floor or buzzing around in the air, stun them, then collect them so he can stuff them inside his gun. Even though this is a six year-old, last-gen title, how many games offer you opportunities like that?

That’s the wonderful thing about this remake; the game still feels so incredibly fresh because it is doing things that nobody else is (simply because few licenses could get away with it).

That said, while the environments do change as you go to different contracts, the level design does start to feel a bit monotonous if played in long bursts. There’s little else to do within the game except go to each contract, collect your bounty, rinse and repeat. When compared to modern-day releases, it’s a formula which seems restrictive and could use better variety. Compared to the vast open worlds we’ve become used to this generation, Stranger’s Wrath definitely feels more limited and linear than when it first launched. 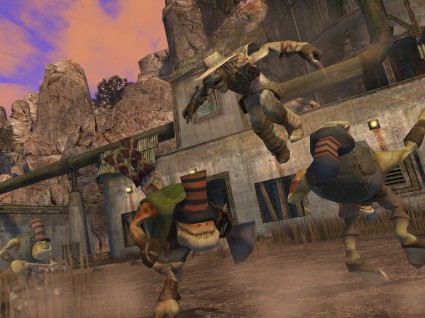 Gotta… see myself in HD
One of the major problems developers have been facing converting their original games into HD is that… well… they don’t look all that great. Stranger’s Wrath certainly isn’t the worst case for this, but no matter how much spit and polish Just Add Water have given the game, it’s still very noticeably last-gen, not helped by how overly vibrant and almost blindingly bright the contrast of the game is. I seriously wondered whether I should have been supplied some form of specialist glasses to play with.

That said, some of the landscapes look truly wonderful, and the characters seem sharper and more defined than ever. Every little detail has clearly been investigated to ensure the game releases in the best possible state. The game actually looks great in 720p and compared to some of the sloppy and rushed HD updates we’ve seen this year, Just Add Water have taken their time with this remake, and it shows.

Stranger’s Wrath is easily defined by its quirky set of characters. The population of the town is full of chicken-like people with gruff accents; outlaws look like elephant-faced jaguars and even The Stranger has a mysterious lion-esque quality under his bullet-holed hat. Oddworld has never been shy in its zaniness, and this plays a major role in it standing the test of time, seeming less dated than many of its counterparts.

Howdy Stranger!
While Stranger likes smack-talking with law-breakers, he can also be quite a charmer. Even though he is a man of few words, Stranger still makes an effort to tilt his hat, introduce himself and ask the well-being of everyday-folk, just as much as he relishes a stand-off with gang leaders.

Most of the cast in the game either sound like they’ve ingested balloons and are permanently talking through helium, or they’ve attended the Halo Elite’s school for gruff-voice acting. It’s only Stranger that sounds somewhat normal, speaking through a silky smooth southern accent lined with lengthy, deliberate pauses in his sentences.

Surprisingly the game has quite a quippy, entertaining script, with a decent storyline to suit such a bonkers world. Even though you’re always in the shoes of Stranger, there’s an element of mystery about him that helps usher you toward the game’s conclusion. In an era where game developers and film makers seem adamant on giving you every intricacy of a character’s thought-process, explaining every decision they make, Stranger’s Wrath gives you very limited information, which creates a suitably intriguing and unique protagonist. Stranger isn’t a mute, but he’s not giving you the full backstory of his life either. While this may not always work in some tales, Oddworld has enough going on to keep your imagination active. 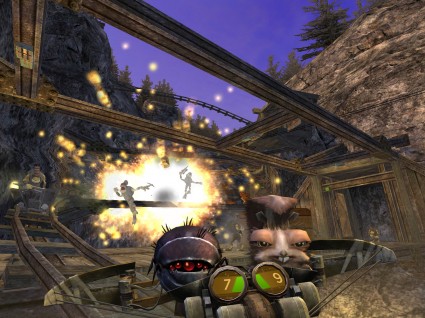 Suck on this PETA…

We’re sure glad you came back to town.
When it first arrived, Stranger’s Wrath was one of the final titles released for the original Xbox, but it was also a platform exclusive. As such, many of you probably never got the chance to play it. You should fix that right now.  I can honestly say you’ll have experienced very little like this on your Playstation 3.

Firing ravenous fuzzballs at enemies that cause them to run around screaming, sniping them in the head with killer wasps, or knocking them out with armadillos would certainly cause many publishers to scratch their head during a pitch, but Stranger’s Wrath manages to make it all work, in its own rootin’ tootin’ way.

Linearity aside, this is still a pleasure to play, as it offers a unique, unequalled spin on familiar gameplay types we’ve all become accustomed to.