I suppose it’s ironic that over the last few months, I’ve reviewed more re-releases than I have brand new games. You can tell when the end of a console’s lifecycle is approaching when they start to take games from a previous gen, give them a new lick of paint, and release them for those who were fans of the original, or those who never got the chance to play the first time around.

Interestingly, however, Resident Evil: Code Veronica hasn’t benefited that much from High Definition. In fact, it’s damn near a straight Playstation 2 port. Granted, the source material represents one of the very best additions to the Resident Evil series, but the point remains in place.

With that in mind, is this version of the game an example of Capcom wanting to give something back to the fans, or more of a reason for them to make a quick buck?

Somewhere in-between instalments…
Code Veronica started life as a Dreamcast exclusive. Back in 2000, this was unprecedented, as, up to that point, the Resident Evil series had been exclusive to Playstation. That didn’t last long, though. The definitive edition of the game was released only a year later on Playstation 2 and updated with additional cut-scenes and slightly polished visuals. In essence, what the Dreamcast ended up with was more of a timed release…

CV is a direct sequel to Resident Evil 2, and takes place before the events of Nemesis. In a first for the series, players get to control Claire Redfield, sister of series regular, Chris Redfield. Claire’s mission sees her arriving in Paris to raid an Umbrella facility. The whole purpose of this is to find her missing brother. Unfortunately, Claire is captured whilst infiltrating the facility and imprisoned on Rockfort Island.

Then, just when all hope seems lost, and Claire is left to rot behind bars, she is released from her cell by one of the guards. At first, it seems as if he’s done the best thing for her, and so she celebrates her newfound freedom. However, the guard soon tells Claire that the entire island has been overrun and almost everyone has been contaminated by the T-Virus. Suddenly, her quest is as much about survival, as it is finding her lost brother.

The game is very much in tune with its forefathers and successors, placing our protagonist in increasingly tense situations, and building towards an unnamed horror that threatens to destroy all we know and cherish. However, it’s not so much the horror in Code Veronica that defines it, as it is the story and puzzles that make up the game’s 20 hour campaign. Considering this was released after Nemesis, which was entirely focused on placing the main character on the run, Code Veronica offers a very nice change in pace, and a very welcome one for the series. 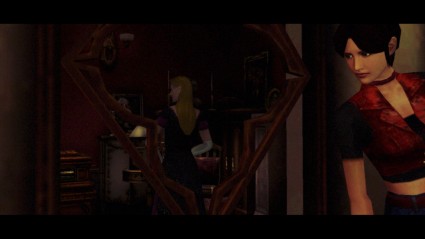 This game has the single best plot twist ever...

Death and Decay
Now, one of my major problems with this upgrade is how little of an upgrade it actually is. For a game that has HD slapped on it, I can tell you outright this is not a HD re-imagining of Code Veronica.

Equally disappointing is that the control scheme has not been made to take full advantage of an Xbox Pad. The game is only playable via one analog or the D-Pad. You know how you normally turn a character with the right analog stick, then move with the left? Not here. Back in 2000, that idea hadn’t even been thought of yet, and so we have to play the game almost exactly the same way we would have played it then. Essentially, half of the Xbox Pad is ignored and utterly useless in Code Veronica.

After eleven years, that is a hard pill to swallow, and really does make dictating the action on the screen awkward and cumbersome. At first, playing Code Veronica felt completely alien to me, and even though I eventually acclimatised, I still found incredible difficulty in aiming and getting my shots off several hours in.

The game does have a 180 fast-turn, which can make things a bit easier, but even steering that with the standard control mapping can be a bit of a chore. If you want to maximise enjoyment here, be prepared to unlearn everything the 360 has forced you to get to grips with this gen. That’s what makes me think that, unless you were a Code Veronica fan to begin with, or a die-hard Resident Evil fan, this version is probably not for you.

Another feature that may surprise you is the lack of a Checkpoint system or an autosave feature. In Code Veronica, you will need to walk around; finding Ink Ribbons and using them on Typewriters situated in particular areas in order to save your progress. For me, this makes an already tense situation, all the more intense, and forces you to carefully consider your movements throughout the game as there are only a limited number of ink ribbons, and typewriters. I know that won’t be for everyone, but for me, it still makes for a unique, exciting experience when placed against today’s hand-holding market.

Other important features CV introduced to the series include the ability to dual-wield weapons, and fire them in different directions, allow players to restart a scene after a Game Over Screen, even if they hadn’t saved the game at a typewriter and customising your handgun and increasing your inventory slot allocation.

Loading screens are also cleverly handled, and made up of the player walking through a door or climbing a set of stairs through a first person perspective. Sometimes, depending on how close to an enemy you are, you will even feel the character’s heart beat through the vibrations of the pad. This is one of the nicest additions to the Code Veronica upgrade, and makes the best use of pad vibration I’ve seen in a long time. 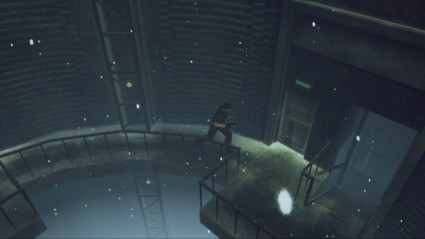 You get to play as Chris before the steroids...

Claire is the hawtness
How much of a HD upgrade is this, you may be asking? Well, it’s not a full HD reworking so much as it is just a revamp of the existing code. CV now features Widescreen High Resolution Graphics which makes it suitable for play on HDTV sets. The engine has also been tweaked in various ways, with the most notable improvement to the game’s look coming from remastered dynamic lighting. This is especially clear when Claire walks through dark, dingy corridors with only her lighter to guide her. The engine has also been converted to run on Capcom’s modern multi-platform engine, MT Framework, which enables the game to benefit from extra processing power.

Code Veronica was the first Resident Evil game to benefit from 3D backgrounds, instead of the pre-rendered backdrops that initially defined the series. As you move around, the camera will move with the character, situating itself at semi-fixed angles. Again, this may be very off-putting for people who prefer today’s more freedom thinking 3D games, but its importance to the genre certainly cannot be denied.

Unfortunately, the cut-scenes still seem very grainy and dated, and on the whole, the graphics are just as you’d remember them from the Playstation 2. Ironically, the majority of the graphical improvements in CV HD can be seen in the menu screen, rather than in the game itself. Disappointing, to say the least…

RESIDENT…EEEVILL
Unfortunately, the sound follows much the same trend as the graphics. The sound-effects and music are all very muffled as you go through, as if they’ve barely benefitted from the HD treatment. As such, CV sounds its age, and suffers from erratic changes in the volume, no matter how high or low you’ve set it on your TV

There does seem to be some changes made to the game’s musical score, with instruments seemingly more prominent than before, but they’re mostly drowned out by Zombies that sound like they’re being suffocated by a pillow!

There is also a horrendous, drilling sound that pierces the eardrums every time you start the game. I’ve no idea what it is supposed to represent, what I do know is that it’s f***ing annoying!

Most shockingly of all, however, is the omission of subtitles from the game. For those that are deaf, this effectively makes Code Veronica’s story utterly indiscernible. Sure, you could watch the cut-scenes and gain insight from them, but with the story-telling relying heavily on character relationships and development, you will find yourself getting lost very quickly. A poor oversight from Capcom. 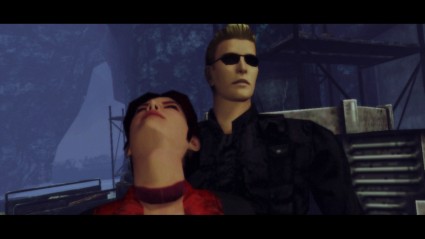 Code Red
Considering Capcom’s original stance that this will be budget pricing, £20 for an eleven year old game that seems to have been barely restored at all is a bit of an ask.

Being brutally honest, this is a lazy port that really could and should have benefitted from more. Yet, it is still an essential purchase as long as you consider your stance very carefully. Code Veronica has one of the best stories in the Resident Evil series with a 15–20 hour campaign, it offers a full 1,000 gamerscore, and is absolutely dripping with lore that will be a ravenous delight for series enthusiasts.

It’s lovely to play Code Veronica again after so long, but with a very dated control scheme and last-gen graphics, I really wish Capcom had made more of showcasing this crown jewel of the Resident Evil series, rather than giving us only a half-hearted effort.