Review: Sesame Street: Once Upon a Monster

I don’t care what you say; Kids TV is not as good as it was back in the 80’s. Lazy Town, In The Night Garden, Peppa Pig? Pfft! It’s all about The Muppets, Rainbow, Sooty and Sesame Street. That’s how I learned my life lessons, and look how I turned out… Yeah, okay, not the best example, I know…

Regardless, it’s an era I hold in high esteem, and I credit those who spent tireless hours sticking their hands up a puppet’s bum, doing voice overs and creating educated scripts to inspire my childhood fantasies and bring a smile to my face whenever I felt low. Naturally, you’d suspect that at 28 I’ve grown out of such things, however when Double Fine announced they were doing Sesame Street on Kinect, I think I was probably more excited than the five-year old demoing the game.

Double Fine are renowned for their boundless creativity and far-thinking worlds, but this is the first time they’ve worked on an established intellectual property, and the first game they’ve produced for Kinect.

Was it a combination made in heaven, or a collaboration bore of sin?

So yes, the team responsible for Psychonauts, Brutal Legend, Costume Quest and Stacking have released a Sesame Street game. Get it? Got it? Good.

Interestingly, however, the game originally started life as a children’s game focused on monsters, without the Sesame Street affiliation. Monsters, such as Marco and Seamus, were previously created by Double Fine artists, and would be the lead characters in a game that was originally going to be known as Happy Song. However, as time went on and Double Fine started pitching Happy Song, they kept hearing that the game would be a natural fit for the SSVerse. Queue meetings with top execs and leading publishers and BAM!

As such, even though Once Upon a Monster is distinctly Sesame Street, with Cookie Monster and Elmo taking up most of the screen time with their own personalities, there is an unmistakable Double Fine quality about this game. The team have done amazing work in blending the two entities together to create a very smooth partnership. 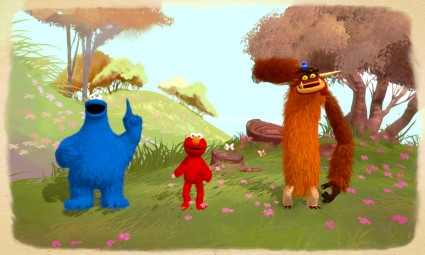 Elmo's a bit fed up of folk trying to tickle him...

Can you tell me how to get… how to get to Sesame Streeeeeeeet?
OUAM is focused entirely on a storybook and the chapters contained therein. Each Chapter represents a story for a different monster, with the majority of the narration and in-game action being magically commanded by Elmo and Cookie Monster. Individual chapters deal with different issues felt and experienced by children across the world, making each chapter meaningful and engaging for very different reasons.

At the start of every chapter, Elmo and Cookie Monster find a monster struggling to deal with their own individual insecurities, such as loneliness and fear. For instance, the first chapter sees a monster named Marco celebrating his birthday on his own; a horrid thought for anyone, let alone a small child. Then in a later chapter, a shy Monster named Seamus wants to try his hand at acting, but is too shy to do it on his own.

Fortunately, with both Elmo and Cookie Monster involved, these monster’s lives are about to be changed. That’s the beauty of OUAM, it’s very warm, friendly, and educating, but it is never overly gushy, or patronising. There were plenty of times I found myself laughing at Cookie Monster trying to be authoritative and at Elmo’s stupid jokes.

Once Upon a Monster is fully controlled by Kinect and is made up of various mini-games, which have been sewn together by the game’s story. Most games that attempt this always seems as if they’re throwing in the story for the sake of just putting a particular mini-game in place, yet with OUAM I felt as if the mini-games were actually working around the story. Playing dress up with the monsters was perfectly suited to attending a birthday party, as well as acting out on stage, just as pulling weeds and watering flowers felt applicable to restoring a garden.

Some mini-games did drag their heels, and felt a bit tedious towards their end, but the majority were actually very fun to play, and each made good use of Kinect in creative ways. Blowing out the candles of Marco’s cake was a particular favourite of mine, as well as acting with Seamus. However, there are also dance routines, you will need to fly like a bee to reach the top of a tree, there are obstacle courses and even garbage basketball!

There are cameos from various Sesame Street residents throughout the game, but the majority of the time, you will be with Cookie Monster and Elmo. While that may seem disappointing at first, one of the genuine thrills of this game comes in waiting to see who cameos in each particular chapter. Don’t worry, many of your favourites make an appearance, all of them under various different guises.

On the whole, the Kinect responsiveness is excellent, and I can honestly say, that I’ve not had so much with fun with using my Kinect all this year. Once Upon a Monster is genuinely entertaining, no matter what age bracket you’re in. 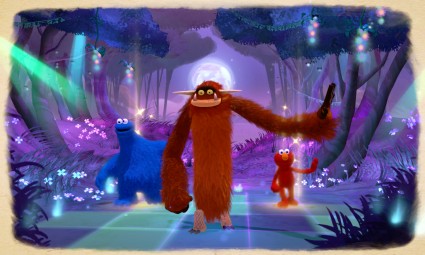 Today’s letter is… G…
OUAM’s graphics are bright and vibrant, extremely attractive and a massive distraction for the eye. It’s hard to take your eyes away from the screen when the game is on, because of such a rich palette. The game is very faithful to the original Sesame Street vision, and the engine features dynamic fur simulation and skeletal animations which replicate the behaviour of the Sesame Street puppets. It’s a credit to Double Fine to see just how hard they’ve worked to make sure OUAM remains authentic to the work Jim Henson’s Workshop did all those years ago.

The game is very funny, and while it will naturally be a lot of fun for kids, there are some very subtle, but knowing nods to adults as well. We’re not talking at a Pixar level here by any stretch of the imagination, but OUAM can definitely encourage an adult to get into the game with their child, play quite contentedly, smiling along the way.

That said there is unfortunately some repetition in dialogue. Elmo and Cookie will say the same things over and again, which can be quite frustrating to hear after the third or fourth time, and does detract a bit from the overall experience. Fortunately, most mini-games are quite short, and once you’ve completed them, the dialogue loop soon stops and it is back to the story. 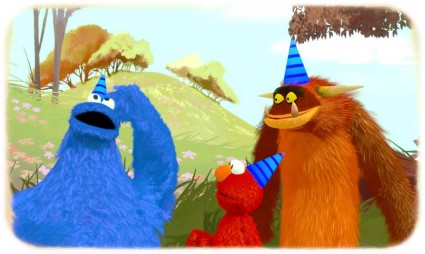 The game does deal with some grown up problems at times. Elmo's addiction to crack is not one of them, though...

Taking a right turn?
I can genuinely say that I’ve not found many Kinect games that have kept me on my feet for longer than an hour, and have haunted me days after I’ve turned them off, but Once Upon a Monster has achieved exactly that.

This is a reason to own Kinect, a true killer-application that showcases the good this device can do, rather than the bad. Naturally, this is probably best purchased if you have children in the house as they would appreciate it most of all, but even adults can find a decent amount of satisfaction here.

It’s taken almost a year to get here, but finally, Kinect owners have something to truly care about post launch line-up. Once Upon a Monster is wonderful, and an absolute joy to play.