It’s fair to say SEGA have tried to make the most out of their lead mascot, Sonic the Hedgehog, placing him a variety of different games with the ensemble cast he usually hangs out with, such as Tails, Knuckles, Amy Rose, Shadow the Hedgehog and of course, Dr Eggman. Sonic Free Riders is the spiritual successor of previous Sonic Riders titles but naturally plays a lot different from its predecessors as this one is controlled completely by Microsoft Kinect. The game is a Kinect launch title and is SEGA’s first effort with Microsoft’s motion sensing peripheral.

Did they get it right?

While both racing games on paper, this is an extremely different product to Kinect Joy Ride. The object of the game is still to beat the other player’s time, using objects to improve your abilities and to hinder the opponent and perform some tricks in order to gain more acceleration, but Free Riders adopts a more futuristic approach than Joy Ride and is much more hands on than Microsoft’s offering. While Joy Ride has you using your hands to steer the car as if you have a steering wheel in your hands, Free Riders demands you use all of your body to operate the hoverboard-like gear, bending left and right to turn, leaning forward to accelerate and holding back to break.

The game’s story mode, Grand Prix, sees you controlling one of four teams in order to obtain the cash prize and treasure, with Team Heroes (Sonic, Tails and Knuckles), Team Babylon (Jet, Wave and Storm), Team Rose (Amy, Cream and Vector) and Team Dark (Shadow, Rouge and E-10000B). There are also additional characters you can control in the Sonic-verse which are gradually unlocked as you play the game. The idea of Grand Prix mode has Dr Eggman hosting an EX World Grand Prix offering the winners treasure and other cash prizes. However, being Dr Eggman, there seems to be more to his motives and as the story unfolds, so you start to learn of the more sinister truth.

Grand Prix is essentially a series of missions that you’ll need to complete on various courses with different sets of objectives. So for example, one mission has you performing tricks before you reach the finishing line and you need to earn x amounts of points before you can continue, where another mission has you collecting 100 rings in a set time limit. In order to complete these missions, you’ll really need to know how to play all aspects of the game. Unfortunately, the difficulty curve is quite high on this one (especially if you want to perform everything perfectly) so before attempting this, you need to make sure you can do everything right first time! Of course, the game isn’t just bound to Grand Prix, you can try Time Trials, Relay races, play co-operatively or competitively or just try out Free Race to get used to the various tracks in the game.

The game also encourages you to collect rings while you play in order to level up your Gear and your racing abilities in each individual race. You’ll level up your dash, limit and power during the race, which increases the acceleration of your craft, the power behind each projectile you launch at the enemy and your own stability. Not only does it help during the race but it also helps you outside as the game has a shop where you can spend your collected rings on all manner of upgrades for your current Gear or to buy an all new Gear which is even more powerful than the one you’re currently using. 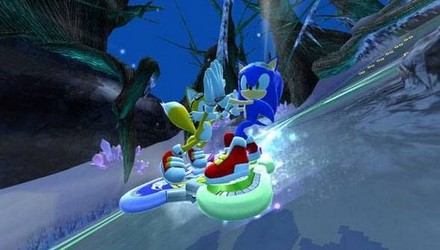 Sail or soar?
Describing Sonic Free Riders, I’d say it blends F-Zero with Tony Hawk and Mario Kart. Futuristic racing with grinding and tricks and powerups which can be used to attack your opponent or to give your Gear an extra little boost. The gameplay itself is actually a lot of fun, it does have a lot to offer if you can get used to controlling it and does have replayability. The problem with Free Riders is that controlling it is awkward and really off-putting. Arching your back left and right to turn, moving back and forth and jumping on the spot gives a good workout, but when the game doesn’t always respond to your actions, you begin to wonder if there’s a point in pushing yourself for it.

There are some cool additions to the game though, for example each power-up is different and will require you to create a different motion in order to use it. You’ll get a bowling ball in the game and in order to use it, you’ll need to perform an under-arm swing, just as you would bowling. Another has you holding a rocket above your head, in order to fire you’ll need to do an overarm throw and the missile will then home in on the target. However, you’ll find yourself trying the same gesture several times before the game picks it up, which, once again, really does make you question if you want to dedicate more time to the game or not.

Free Riders is one of the few games in the launch line up that has voice activated menus, which is actually the most convenient and responsive aspect of the game. You can navigate the menu with your hands as before, but sometimes this can be slower and irritating. By simply saying ‘Start Game’ and ‘Select’, the game will jump you right into the next menu or even into the game itself without a single flick of your hand. Impressive! However, you’ll need to know exactly which words to use and be accurate with it, otherwise it will take you to another menu you won’t want.

The game is one of the most difficult to control and adjust to in the Kinect Launch Line up, but it can also be the most rewarding if given the chance. 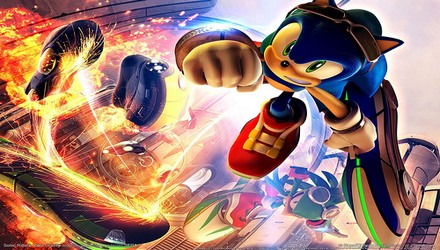 Colour or blur?
As expected from a Sonic title, Free Riders boasts rich, vibrant colours. It’s everything you expect from a game featuring the Hedgehog and really does have an authentic stamp on it. The characters look as alive and well as they ever have, each with their own distinguishing features. The game is one of the best looking of the Kinect launch line up, maybe not as graphically appealing as Kinectimals but still able to win you over with its charm and grace. Sonic Team are bang on the money with the graphical output for Free Riders, it looks stunning.

The courses are also very different and exciting and you’ll go from the snowy peaks to rocky mountains and even pyramids. Sonic Team have applied an incredibly diverse approach in the way they’ve approached each course and clearly have applied a lot of time and effort in making sure the game doesn’t look stagnant and gives off a refreshing experience during each play-through. 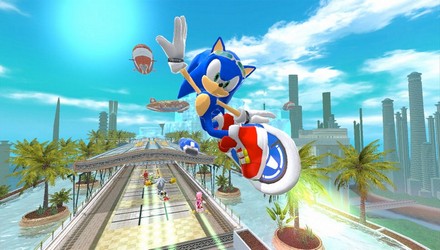 Whizzing past
I found some of the menu music to be ugly on the ears and not exactly in the spirit we’ve come to know and love from the Sonic tracks of the past. However, some of the other tracks on the courses are actually quite catchy and totally authenticate the experience Sonic Team have tried to represent graphically. There’s good and bad with the music in Free Riders, but while the graphics are up to the usual Sonic standard, I found the soundtrack left more to be desired.

Some of the comments from the characters during the race are also quite corny, to the point where you think these racers really need to learn a lesson in competition. C’mon Tails, you don’t need to apologise every time you hit someone with a golf ball; you’re trying to win a race. Also, the voice of the tutorial chao could be the most annoying I’ve heard in a game this year. I wish that little guy had been on a board alongside me so I could blow him up with missiles. That might have made the experience a little more bearable…

Sonic over the Waves
One of the cool features of Free Riders is that it is playable over Xbox Live and it brings with it three modes to play; normal race, ring collection and damage control. Normal race is pretty self-explanatory, up to eight players can race against each other on one circuit to see who is the fastest. All in all, it seemed pretty stable when playing online, although there weren’t many people looking to play Free Riders with me which did make the wait times pretty agonising. That’s quite a bad sign when the game is less than a week old and hardly anyone is playing. That being said, the learning curve on this is pretty difficult, so perhaps people are biding their time before allowing themselves to potentially tarnish their record online.

Collect the Ring is also pretty self-explanatory. Choose a circuit, a character and compete against another player to get the most rings possible within the time limit. This is a frantically fun mode and really does make for some tense moments, especially if you’ve just lost a bunch from a projectile being launched in your direction. Damage Control is the final event and has you trying to inflict as much damage as possible on your opponents in the time limit, with the most points winning at the end. This one is all out carnage and might be both the easiest game to play online and the most unpredictable.

You can also take your avatar online and play against other opponents if you don’t want to use the usual Sonic characters, just as you can in local co-operative or competitive play. 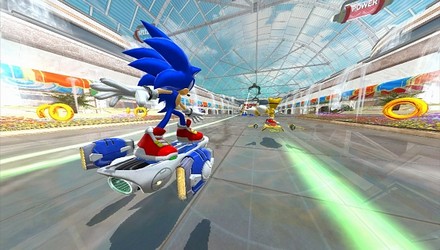 Leave it all on the track!

Conclusion?
I want to love Sonic Free Riders as the game itself is suited to Kinect; it is fun and offers a lot of bang for your buck with a wide variety of modes, online connectibility, co-op, competitive and more. Unfortunately, while the ambition is prominent, the playability is glitchy, at times unresponsive and frankly ‘just not there yet’. SEGA deserve a pat on the back for their efforts to the point where I’m hoping they make a second Free Riders game for Kinect when they’re a bit more familiar with the tech. Unfortunately, having played Adventures, Sports and Dance Central with Kinect, I know what Microsoft’s motion sensing camera is capable of and some of the lazy development of Free Riders does shine through when you’re playing the game. You’ll find yourself pausing the game regularly at inopportune moments during a race (especially irritating when you’re online playing competitively), you’re unable to perform jumps even when you’re doing exactly what it says on-screen and finding yourself stuck in the landscape, unable to move or react.

That being said, the groundwork has been laid for a great game and with some luck, Sonic Team will try again with this. As a launch title, it is one of the better offerings with so much content, but I can’t recommend this over the likes of Kinect Sports, Dance Central and Your Shape Fitness Evolved, simply because they’re much more polished experiences and have really figured out what Kinect is all about. This game is fun but you really do have to pay the price in order to find it.