Everyone has a favourite superhero and mine has always been the Superman. From year dot I’ve been enamoured with the Man of Steel and everything to do with him. I’ve watched all the Christopher Reeve movies so many times over, I had a costume when I was three and have the John Williams theme on my iPod. Unfortunately, myself and those like me have been repeatedly subjected to ill-judged, jaded and downright pathetic attempts to bring our beloved Kal-El to life in video-games; to the point where Superman is considered one of the most misrepresented superheroes in gaming history.

Tiger Games, in conjuction with Chillingo, Warner Bros and DC recently had a go at doing our boy justice with their Superman game on the iOS systems. As I tentatively redeemed the code and downloaded the game, I crossed my fingers hoping for something at least decent. What I got was just that, but nothing much more.

Meanwhile, in Metropolis…
There is a plot on offer here, but as it matters so little to the actual progression of gameplay I’ll only skim over it. Lex Luther announces a new space program to protect the Earth from Braniac et-al, but of course, Supes suspects foul play and sticks his nose in. What he finds is a sort of twisted ploy to protect the Earth but take it over at the same time.

It’s presented so poorly it’s difficult to understand the motives behind any of the plot events. One minute Lex is helping, then he’s not. He tells you he’s sending out some Lexcorp soldiers to pick up the slack and yet the game tasks you with killing them. The plot seems to have no bearing whatsoever on the actual level objectives, making it only useful for interrupting gameplay and chopping up the levels.

Superman has a massively rich lore to delve into and is more than open to new directions and innovative plot lines. Tiger Games seem to have neglected this opportunity and gone with the most bog standard of Supes plots; Lex Luthor is trying to fuck up the world again. They may have thought going with the classic tale was a safe option or maybe just the one everyone wanted. Instead, it’s the most boring plotline possible and is about as inspiring as your Dad dressing up as Superman and crashing your 4th birthday party.

Another issue is that the plot explains almost none of what is going on, neglecting its primary purpose. Why are there pieces of space shuttle crashing to Earth? Why did I just have to throw an innocent-looking car into space? Was it not innocent? Well, fucking tell me then! Why is all this shit happening? The game offers no explanations; Metropolis is obviously just one hated, unlucky city. 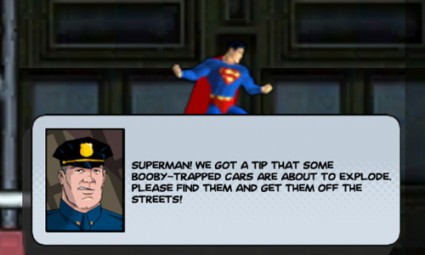 ...yeh, while you just sit there and do fuck all to help!

What’s Metropolis ever done to you!?
The game is split into levels that all follow a similar pattern. You start with a pointless call from Lois telling you what you need to do. These messages are different every time, but you do pretty much the same thing anyway. Fly around destroying stuff and putting out fires, then manage an alert if there is one. These take the form of falling meteors, crashing planes, space rock; generally something massive threatening to ruin poor Metropolis in one fell swoop.

The control is as innovative as it is infuriating. Instead of making you press a button to fly, just guiding Supes around with the overlaid ghost-stick will make you run or fly depending on where you are. It’s a clever idea and works for the most part, hindered only by the unresponsive stick. As a rule I class most overlaid controls unresponsive and this utilised here are no different.

Attacking is achieved by hitting a ghost-button and is context sensitive depending on where you are. By default it shoots your eye lasers, but you also use it to freeze breath fires, punch and pick up things up. It works fine but can occasionally get confused with what you want to do. I spent ages trying to laser a group of flying baddies because some of them were a bit close and despite them being well out of punch range the game thought I wanted to do just that. There’s also another button for flying really fast, but it’s only useful for rocketing into space; try using it laterally and you end up sailing past your objective. They manage a semblance of the Superman experience that grows on your after a while, but unfortunately the repetitive and uninspiring objectives make it a tedious slog by then.

Every mission consists of flying about putting out fires and fucking shit up and while it’s fun at first, it soon becomes pedestrian. The events help somewhat, but after a while they become predictable. Not to mention that every level is set against the exact same Metropolis backdrop, scrolling nicely but never changing. Eventually all the smaller objectives just feel like means to and end; you’re playing for the occasional events. It also makes little sense why Metropolis is constantly under attack and in duress. People are still driving about and going to work despite constant fires, evil robots, falling space crap and bomb threats. It’s like the most hated man in the universe is hiding in the Daily Planet building and every bad guy from here to Pluto is trying to kill him, fucking up the city in the process.

There are moments of pleasure; the first time I sped upwards and cracked the atmosphere, emerging in silent space, was pretty cool, and zooming back down to Earth to save the city was also pretty cool. The alerts are fun at first but are soon folded into the standard game and become just another thing to deal with. There’s very little progression and the repetitive gameplay means it’s difficult to keep playing past the first few levels.

Tights and cape
The first thing to note about Superman’s graphics is that while HD textures are offered as an optional download for Retina devices (3rd or 4th generation onwards I think) it seems to crash halfway through the download. So I had to judge the game based on the SD graphics displaying on my Retina screen and it’s not great news.

While the city is designed well and everything is drawn okay, it’s a shame to have to admit that the best graphics are in the comic book cut-scenes. Brilliantly drawn panels animate across the screen with little speech bubbles popping up and it reads like one of those digital comics. There aren’t that many of these scenes though and most of the time you’ll be staring at the drab and uninspiring graphics of the game itself.

Superman looks fine, as does Lex. Everything is drawn to some standard but Metropolis looks grey and boring; a stock, cartoon city. Superman seems to be apart from the backdrop, like a badly cut-out drawing, carelessly left on top of another. The special combat effects spice things up a bit, but under close scrutiny look pixellated and weak. In general the whole thing looks poor and doesn’t stand up to the fidelity of other cartoon-based games like Angry Birds or Cut The Rope.

Of course I’m reviewing it without the HD textures, which I’m sure would improve the graphics no end. The fact is that if I can’t download them because the game crashes then neither will you, so it’s more than likely you’ll be playing with the standard graphics as well. If Tiger want their game to be judged at its best then they should be careful to ensure that the best is available. 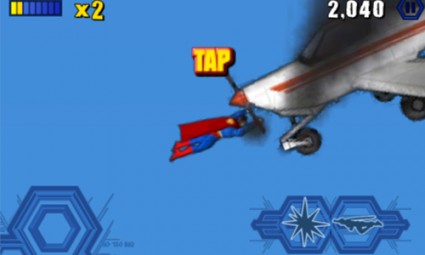 Is the conductor deaf?
Superman offers little in the way of inspiring sound, although considering the gameplay that’s no surprise. Each action has a sound which fits fine, but the audio isn’t going to blow your mind. There’s no dialogue as everything is presented in text and what sound there is is initially drowned out by the irritating music.

At the title screen you’re greeted by the worst butchering of the John Williams Superman theme I’ve ever heard. It’s like the conductor was pissed and just waved his baton around, the orchestra of six confused at the random order of things. It sort of resembles it but only enough for you to wish it was the real thing. It seems that despite having both Warner Bros and DC endorsement, they couldn’t get the rights to use the theme that everyone associates with the Man of Steel. Either that or they thought it would be better to mess with it and be different; while I’m all for being different, there are some things you just don’t fuck with. Imagine a Star Wars game with a mashed-up theme; it just doesn’t work.

The rest of the music is annoying and repetitive. The basic levels bombard you with shrill trumpets that loop, a vain attempt at some exciting hero music that instead conjures up images of those fake superheroes used in American sit-coms. “It’s Janitor Man! Duh-duh-daaaaaaaaa, duh-dee-dah!”. When an event happens the music switches… to an equally annoying and repetitive trumpet salvo. I mean Christ could they honestly not include some strings?

The Fall of Superman
I suppose I expected this. Every time a new Superman game has come out my heart has leapt and my spirits soared at the hope that this one would be the good one. Yet every time my hopes have been dashed and I’ve beaten myself up, angry that I even allowed myself to think it would be any good. Unfortunately, Tiger Games’ paltry attempt has once again repeated those events.

It presents the possibility, the skeleton, the whispered ambition of a good game but is marred by shoddy execution and a carelessness usually reserved for budget titles and obscure Japanese anime games. Superman is the big dog, the daddy, the fucking Alpha of the DC universe. He’s at once the archetypal superhero and the best of them all. He represents freedom, justice, honour and peace. He inspired a generation of kids to follow their dreams, stand up for what’s right and believe in justice and freedom. He is the flagship superhero and the most loved of them all.

It’s for all these reasons that you can’t just stick him in a bland, wave-based arcade title and expect it to go down well. Unlike many of the lesser DC heroes, a game cannot be sold on the presence of Superman alone; that presence has to be respected and catered for. Once again a developer has missed the point and produced an uninspiring Superman game to add to the already overflowing dustbin. While it’s not the absolute worst Superman game I’ve ever played, it fails to be entertaining for more than an hour and your money would be better spent put towards getting one of the classic movies off iTunes.