The lure of riches can claim an individual’s soul, and send them on far-reaching, wild adventures in search of it. People will do crazy things in its name, their true voice can at last be heard, the impact of their decisions, utterly felt.

Nathan Drake has already seen so much, committing himself to impossible causes in order to uncover the greatest of secrets, but it is in Drake’s Deception that he truly meets his match. For the first time, the lovable rogue is about to face impossible truths and confront harsh possibilities. This adventure will get under his skin like never before.

Did it also get under mine?

Nathan Drake and the Story So Far…
Uncharted 3 doesn’t require you to have played the previous instalments in the series, but you’d be missing out on a lot. Naughty Dog have created very deep, intricate characters that have revealed quite a lot of themselves already, and created a bond that many wouldn’t feel the full force of were they only coming into the series for the very first time. Still, it’s not mandatory.

Drake and Sully have ventured to a pub in England to meet with a potential client. They’ve negotiated for a large sum of money, trading Sir Francis Drake’s ring for it, and are about to make the exchange. However, just as the deal seems to go off without a hitch, Drake notices that something is up; the briefcase is actually full of counterfeit money. Pissed, Drake snatches back the ring, and promptly, he and Sullivan get involved in a massive fist fight with a dozen goons. They haven’t even had time to sink a pint.

Right from the get-go, you can tell that Uncharted 3 is going to be filled with cinematic sequences designed to keep your eyes transfixed on the screen, and your hands firmly on your pad. Interestingly, however, it’s not the story so much that really shines about Uncharted 3, in terms of what is already out there, it’s pretty stereotypical. What drives Uncharted 3 is the ensemble cast, their interactions with one another, their thoughts and their feelings.

Playing Uncharted 3, it is frightening to think how compelling a narrative in a video-game can be, and how it puts many supposed blockbuster films to shame with its attention to detail and excellent pacing and development.

I’m not going to say anymore about the story of Uncharted 3 as there are many twists and turns that will surprise and shock fans of the series (as well as those coming into it for the first time), but suffice it to say, the action doesn’t let up for a moment, and it is engaging to the last. 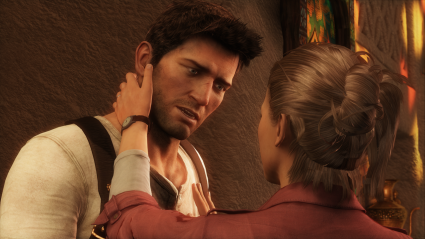 Uncharted has some of the best characters this generation has seen.

Nathan Drake and the encyclopaedia of one-liners
So, with Naughty Dog telling such a great story with such great characters, then what is it about Uncharted 3 that has so many reviewers upset?

I didn’t have to wait long to find out.

The controls in Uncharted 3 really do hold back it back from lifting the Game of the Year crown high. For starters, the aiming feels so stunted and utterly inaccurate. It’s so difficult to come to Uncharted 3 and appreciate its aiming qualities after playing the likes of Gears of War 3 only a month earlier. In terms of control, Epic are way ahead of Naughty Dog in this field. Perhaps it is unfair to compare the two games. Perhaps it isn’t. Regardless, both games are played from a third-person perspective, with both having action sequences that parallel one another in terms of style; getting into cover, firing at enemies with a crosshair and aiming it with the right stick. Yet, the differences are more than noticeable. Even with the sensitivity turned up, moving that crosshair around the screen feels like a chore.

It’s also very difficult not to compare Uncharted’s control scheme with the likes of Assassin’s Creed in terms of scaling buildings and moving from place to place. Whereas Creed seems to do it effortlessly, Uncharted bumbles along, and regularly seems to send Nate jumping in directions you clearly didn’t tell him to. It’s by no means as bad as watching the Prince voluntarily opting to free-fall off the side of a building just because he knows Elika will save him, but Nate is pretty gungho, and he knows that none of the people chasing him are going to be sticking out their hand to stop him from going splat.

It’s also pretty disappointing how reliant Naughty Dog can be on QTE within Uncharted 3. The action sequences are dramatic enough that you’ll be partially relieved, merely having to tap a button to find out what happens next, but at the same time, it does tug you away from complete immersion, and it does cushion some of the potential impact that other action sequences in the game ooze triumphantly.

Negativity aside, however, what we have here is a genuine thrill-ride. Uncharted 3 could control better, but it’s not unplayable. Let’s not delude ourselves into thinking otherwise. Uncharted 3 still plays a darn-sight better than a lot of other games that call themselves third person action/adventures. Perhaps the bar was raised so high from Uncharted 2 that others were expecting equal standards, but regardless, this is still an exceptionally well-handled game that moves beautifully from set-piece to set-piece and keeps you stuck to your pad throughout.

Honestly, I found it really hard to put Uncharted 3 down. It absorbed my game time like few other games have this year, let alone this gen. 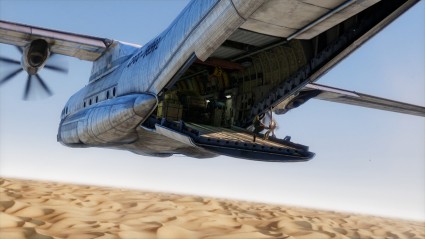 The action sequences are as epic as ever!

Nathan Drake and the Raider of the lost glitches
Uncharted 3 is an elegant game. It is genuinely, unflinchingly beautiful. The true variety at play here is incredible. You’ll be visiting good old England to start, but then you’ll find yourself in vast open deserts, hangars, deep caves, even the old London Underground. Uncharted 3 does not try to fob you off with the same locations with a new lick of paint, either. You’ll feel like you’re in these places. Nate will struggle to walk through the desert when desperately craving water; he’ll rummage through the underground, confined to small, dark spaces. The game never feels dull because every location feels very different from the next, and, most importantly, all these sequences run so well together.

However, it’s not just incredible set-pieces and eye-watering, gorgeous landscapes that engross you. The facial expressions of these characters say almost as much as the words they’re speaking. Like few games out there, Uncharted 3 makes it easier to read your characters, allows you to see past typical wooden voice acting being read from a script. You can go deeper into the words, almost as if having a face-to-face conversation with these virtual avatars yourself. Naughty Dog have given life and living to their cast, whether they’re taking centre stage or they’ve only got a few lines to their name.

Sure, better looking games have appeared this year (some Elder Scrolls game springs to mind) but Uncharted 3 is an absolute delight for the naked eye.

Nathan Drake and the… Oh Forget it!
Of course, for all the facial recognition and excellent graphics in the world, without a decent script and voice acting to deliver it, the content is going to be pretty wafer thin. Fortunately, the ever excellent Nolan North is on form and is as quick, flippant and charismatic as Nathan Drake as ever. There are very few voice actors that have made a character their own as much as Nolan North has with Nathan Drake. David Hayter springs to mind of course, his turn as Solid Snake is as memorable as any video game character out there, but North continues to bring real soul to this heroic, lovable, yet flawed character.

The script for the game is equally compelling. The source material is as spot on here as ever. Character’s never feel as if they’re doing something out of the ordinary, there is no unnecessary deviation, but there is enough suspicion and intrigue at play, that certain thoughts and feelings will still cross your mind. Couple this with many, gripping tense moments causing frequent palpitations and Naughty Dog have weaved an enthralling narrative, complete with disastrous sound effects that will trigger pure adrenaline. 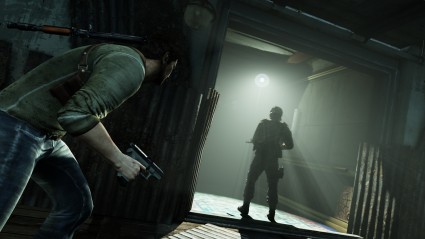 Uncharted TV?
Most of you probably got a good feel for this in the Beta, but Uncharted 3 has improved multiplayer. That being said, with the control scheme the way it currently is, the thought of continuous play isn’t exactly enticing at this stage.

Multiplayer offers a lot more customisation this time around, allowing you to change the look of your character, apply ability boosters and claim skill medals. There is also the opportunity to modify your weapons within the game, giving you a lot of freedom, and introducing a real diverse set of skill styles.

One of my favourite unique features about Uncharted multiplayer are the ‘dynamic environmental events’ that happen on certain levels. On one level, Nate will have to duck and weave, avoiding bullets from a plane shooting above, and that’s just one example. It’s something Gears 3 has used to some effect, but not to this extent. Not only does it make each level in Uncharted 3 unique, but it also helps create incredible strategic opportunities, as long as you know what’s about to happen and you’re prepared for it.

Also unique to Uncharted 3 are collectible treasures, which can be claimed as you play through the game. These can be used to buy upgrades when outside of the game, but also new characters and to customise your own equipment. Be mindful though, players can actually collect each other’s earned treasure for themselves if they kill you.

Benefits are also given to losing teams to help try and get them back into the game, and to help ensure victories aren’t always landslides and seem to be on a more even level. These extra abilities include additional enhancements, brief bonuses and augmentations.

Also new this time is Uncharted TV. This enables you to create your own videos of gameplay and upload them to Facebook, Twitter of the XMB. This is a pretty neat feature, and is definitely one for the community, something Naughty Dog are incredibly proud of. 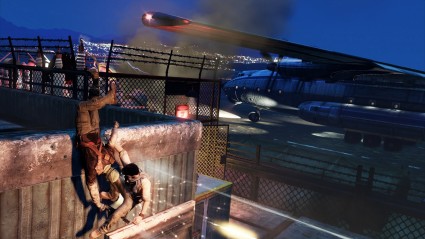 The combat is fun but Uncharted relies too much on quick time events.

The Last Crusade?
In a year filled with blockbuster releases, the name Uncharted is just one that has been associated with Game of the Year credentials. This is certainly an excellently executed game, that gets a lot of things right, chock-full of memorable sequences to boot.

However, it’s not the perfection it could, and should be. Never more have Naughty Dog needed to launch a more polished, refined experience than this year, when considering the competition their title is up against. Unfortunately, they haven’t managed to do that.

That being said, Uncharted 3 is a marvellous, captivating game that, for my money, includes several of the best scenes in any game this gen. There’s a lot of longevity to be found here, and a ton of entertainment. This is, without doubt, the best Playstation 3 game this year, even if it is not the best addition to the Uncharted series.