Saints Row: Gat out of Hell

Are you tired of games launched on last-gen consoles getting re-releases? Well, I’ve got some bad news for you, because here we’ve got Saints Row 4 making its Playstation 4 and Xbox One debut. The good news is that Saints Row 4 was a hell of a game and this new version comes bundled with the Gat out of Hell expansion and a bunch of DLC.

Whilst we won’t be going over the details of Saints Row 4 again (go back and read our original review here), we will be looking at the Gat out of Hell add-on. A stand-alone title, Gat out of Hell is less of an expansion and more of a spreading of existing content over a new town. The question is, is it spread a little too thin?

As with all open-world games, the location you’re set free in is important. After having visited Steelport in both Saints Row 3 and 4, it’s nice to finally have a new town to run around in.

The town you’re running around in? It’s Hell. As you’d expect from Hell, it’s a fairly dark world full of lava and crumbling buildings. The problem is that this doesn’t lend itself to creating visually interesting locations and it doesn’t offer much variety from one street to the other. 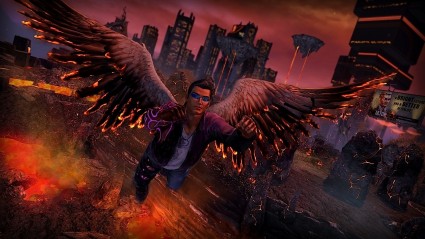 Flying is fun but there’s not too much to see.

Sure, there are floating islands, ominous clouds of smoke and humorous billboards dotted around, but there’s nothing like the vibrancy and individuality seen in Steelport’s unique districts. Even the citizens of hell are nothing more than grey husks, which makes sense but also makes for a slightly lifeless world to be visiting. Forgive the pun.

This is a real shame because Gat out of Hell gives you powers that make moving around a real joy. Running at super speeds, vaulting buildings and flying around with wings that sprout out of your back is fun, but when there’s not much of interest to see or explore it’s a waste.

So if Hell’s not too much fun to be in, why be there? Well, the story is your typical Saints Row stupidness. Following from the events of Saints Row 4, the leader of the Saints and now President of the Universe is in space with their crew and throwing a party for one of the gang members, Kinzie. Short story made even shorter, there’s a ouija board, a portal to hell opens up and swallows the President. Johnny Gat and Kinzie decide to go into Hell to rescue the President. 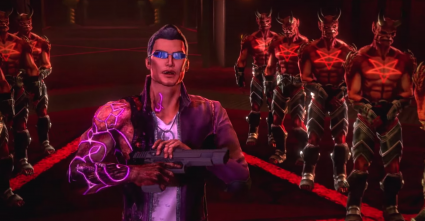 This picture tells near enough the entire story.

A strength of the Saints Row series has always been its cut-scenes and ridiculous set pieces, often played to amazing musical choices. This is what makes Gat out of Hell such a disappointment.

There’s great potential here. Aside from one cut-scene that breaks out into a full on Disney-esque musical number, the other cut-scenes and interactions fall flat. You have conversations with a couple of residents of Hell, including Shakespeare and Blackbeard, but these aren’t used in any meaningful way. They simply act as waypoints to receive missions from, asking you to complete enough of these missions so that a literal gauge fills up, at which point the next cut-scene will kick in and continue the ‘story’.

Speaking of missions, this is the biggest issue with Gat out of Hell. It’s made up of near entirely side-missions. Like in previous Saints Row games there are races to take part in, fraud missions which ask you to ragdoll yourself in front of oncoming traffic, and mayhem missions that simply task you with blowing up as much as you can in an allotted time. Unlike in previous Saints Row games, these act as the basis for your time spent with the game, rather than a distraction. 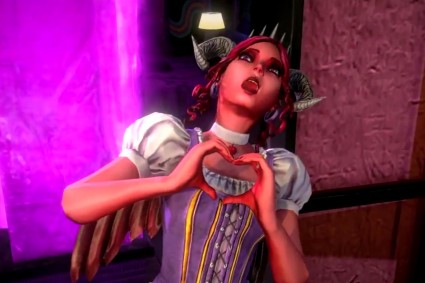 The Devil’s daughter sure can sing. Who knew?

It’s crazy to think that a Saints Row game contains no set-pieces, no use of licensed music (no radio stations) and no unique missions to take part in. Instead you’re given a world full of side-quests you’ve seen twice before and you’re asked to do enough of them so that a cinematic starts.

The base of Gat out of Hell is still fun, largely because it remains unchanged from Saints Row 4‘s formula. The overpowered nature of your character lends to manic confrontations full of explosions and you’re given some neat powers too. Summoning imps, sending shock-waves with a stomp of the foot and turning enemies into stone is fun for a while, but the structure keeps asking you to complete missions that would be nothing more than side-quests in any ‘proper’ open-world game.

If you haven’t played Saints Row 4 before, then the Re-Elected edition is worth a go. Saints Row 4 is a great game full of amazing moments and it’s at a cut-price. If you’re a fan of the Saints and you’re looking for something to tide you over until Saints Row 5, Gat out of Hell won’t be it, as the key elements that make up a Saints Row game are missing. Yes you can shoot demons, run up walls and fly around causing mayhem, but there’s few laughs to be had and no stand-out missions set to Aerosmith songs. Without all that, it’s hardly a Saints Row game at all.