Saints Row IV had a strange conception. starting off as a piece of DLC for Saints Row: The Third, THQ’s troubles led to the game being transformed into a fully-fledged disc release.

We all know what happened to THQ in the end. They vanished and it was up to Deep Silver to come in and pick up the pieces. The question is, has this troubled development process created a troubled product? Let’s have a look, shall we?

Saints Row IV is just as ridiculous as its predecessor. The over-the-top action, plot, characters and setting all return for this generation’s final instalment of the Saints Row saga.

And it has been quite the saga. In the last game, The Saints were becoming slightly more legitimate. You saw members of the gang on billboards throughout the town and the once criminal outcasts were turned into millionaire celebrities. Gameplay and set-pieces were bombastic and it was all played at 100 miles an hour with everything turned up to 11.

So how do you up the ante with this? You make the player’s character the President of the United States and have an alien invasion which threatens the entire planet take place. How does that sound? 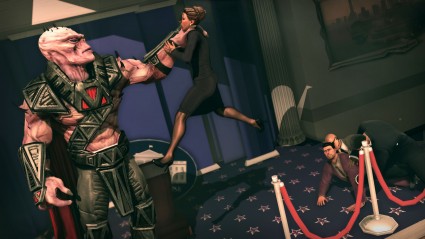 In case there was any doubt, the giant alien is a bad guy.

If it sounds beyond stupid and ridiculous, well, that’s because it is. It’s all done with a tongue firmly buried in its cheek though. Where some games try and be smart with their nods and winks to the player, Saints Row IV manages to to be so sincere in its homages that it never comes of as forced or as pandering. When done poorly, humour in games can make the player feel like the butt of the joke. Saints Row IV ensures that the player is firmly in on the joke.

One criticism that can be levelled at the game is the fact that the town is near identical to the one you spent hours in whilst playing Saints Row: The Third. The excuse being that the story sees the world being taken over by aliens and people being dumped into a simulation of the real world.

So with this set-up which is taken straight out of The Matrix, your open-world exploits take place in an ever-so-slightly altered version of Steelport. Some changes have been made, such as alien control towers now being dotted about the world as well as some none-too-subtle billboards that simply say ‘OBEY’, but it’s hard for it not to feel overly familiar.

Whilst the setting may be a bit of a let-down in terms of originality, this is made up for in the way that it’s used and the fact that missions will often take you out of the ‘seen-it-before’ Steelport.

Ducks in a row
You see, with the game taking place (mainly) inside of a simulation, you quickly learn to use this to your advantage. In another Matrix-esque twist, the player can now jump over buildings, run at super speeds and as the game progresses, you’ll unlock a whole host of other superpowers.

This makes travelling the world, even if it is a world that we’ve seen before, an absolute joy. Running on water and up the sides of buildings gives movement a fluidity that makes hitting checkpoints real fun. 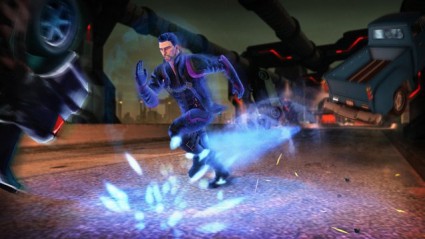 The game does contain cars, but really, who needs ’em?

For those of you that enjoy collecting orbs of power, much like in Crackdown, you’ll have a great time with Saints Row IV. Upgrades and power-ups are constantly drip-fed to you, making it hard to find a good place to stop. ‘I’ll just get one more power-up’, you’ll say, only to then realise you’ve said it five times in a row and it’s now hours since you should have gone to bed.

The main core of the game sees you in the virtual world and for the most part, you’ll be extremely powerful. Huge balls of fire can be unleashed, unbelievably strong buffs can be used that cause enemies near you to spontaneously combust and there are earth-shaking stomps that can be pulled off too. This makes any enemy encounter a ridiculous series of explosions, bangs and crashes. Whilst it rarely gets challenging, it never stops being good fun.

As well as your own abilities being extremely effective, the weapons you come across are just as overpowered and ludicrous. A gun that fires Dubstep is probably the tamest of the bunch. There are weapons that will inflate people’s heads until they pop, others that will cause enemies to be abducted and other weapons (thanks to playing the Australian version of the game) that were simply missing for being too ‘invasive,’ shall we say.

The story offers you a chance to get out of the overly familiar Steelport and change the game’s mechanics up. Often during these missions you’ll be stripped of your powers or forced to play from an entirely different perspective. One section even transforms the game into an old-school, side scrolling beat-em-up. These missions provide a nice break from the routine of being an all-powerful ball of energy and are full of charming cut-scenes that are bound to raise a laugh or two.

Row your boat
What won’t make you smile is the way the game creaks on current hardware. Playing on the 360, it’s clear to see that all of the explosions and running at ridiculous speeds is causing trouble for the soon to be last-gen consoles. 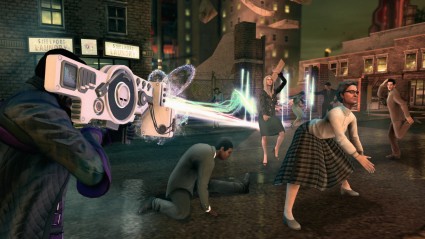 One of my favourite weapons, the dubstep gun. One con: it plays dubstep…

When running smoothly, the game looks pretty great. There are tons of special effects being applied to the world that gives the whole thing a very subtle ‘glitched’ look. For example, cars purposely become pixelated at random points, textures appear to ‘fall away’ and some of the pedestrians have their 3D models bend and stretch in bizarre ways.

When it doesn’t work though, the game almost chunders to a stop. Frequent drops in frame-rate become an issue when you’re trying to land on a small chimney top or you’re trying to time a jump right. It’s hardly a deal breaker (for me at least) but it’s definitely noticeable.

All Saints
What you’ll also notice is the fantastic audio work that’s been done within Saints Row IV. The voice-acting is top notch and really helps with the delivery of the self-referential jokes that are littered throughout the game. Fans of the series will be treated to some serious fan service, as nearly every character from the previous games makes an appearance.

On top of the brilliant voice work being done, Volition’s ability to pick the right song for the job doesn’t seem to have left them. Whilst I don’t want to spoil the fantastic moments that occur throughout the game, one early example gives you an idea of how well a chosen song can marry to what you’re doing in your mission. 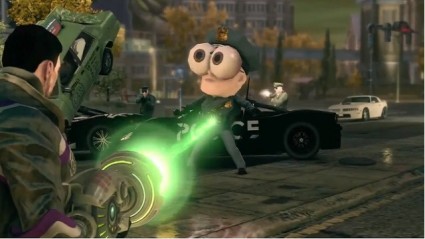 With a nuclear missile on course to crash into American soil, your character risks their life to disarm it mid-flight. Climbing up the side of the airborne missile, your communication device kicks in to hear your crew members bid you a final farewell as they don’t see how you can survive such a suicide mission.

What music accompanies you as you so nobly give up your life for the good of the nation? Aerosmith’s ‘I Don’t Wanna Miss A Thing‘.

Brilliant. One example of many.

Saints alive
Multiplayer feels a little tacked-on. With only some missions being available for co-op play, there’s no real need to indulge in getting a friend involved. For the times you do, you’ll be rewarded with twice the amount of mayhem and chaos. Two heads are better than one, as they say.

So whilst the game lacks any real noteworthy multiplayer support, the package as a whole doesn’t suffer for it.

Saint or sinner?
In conclusion, Saints Row IV is hands down one of the stupidest games I’ve ever played. It’s loud and crass but with a sincerity that makes it charming whilst also being a fairly mindless game to play.

Some people will be put off by the fact that the game started off as DLC and that many assets are re-used, but those people would be missing the point. The game has perfected the silliness and over-the-top action that was started in Saints Row: The Third and now, in Saints Row IV, it’s been perfected.

Saints Row IV is a game that aims to be as fun as possible and succeeds. It’s a game that’s so confident in what it’s doing, it never seems to think twice about if it ever goes ‘too far’. A strongly recommended ‘Buy It’.