I was always awful at chemistry. After finishing a mandatory year of it in high school, I made every attempt to avoid it in college. I haven’t looked at the periodic table of elements since I was 16 years old, and still, it terrifies me.

Outside of Tetris, I’m similarly inept at puzzle games. Although they don’t inspire the same fear in me that chemistry does, I’ve just never been very good at playing them. My experiences with them usually end in frustration.

Sokobond is a puzzle game based on chemistry. While it downloaded, I thought I might have a panic attack.Hydrogen

Sokobond is, thankfully, a calmer experience than I anticipated. Created by Alan Hazelden and Harry Lee, Sokobond is a kind of block-sliding puzzler that they liken to Sokoban (which is where it gets its name) but which will forever remind me of Chip’s Challenge. There is a grid populated by circles, and these circles have tiny orbs on them. You move one of these circles around obstacles and try to create connections between yourself and the other circles. Each connection gets rid of one of those tiny orbs. The goal is to connect all the circles on the board while removing all the tiny orbs in the process.

This is chemistry, I think. The circles are atoms (marked with letters representing their elements) and the orbs are electrons or something, and I guess we are making molecules here. To be honest, I don’t really know, and to its credit, Sokobond doesn’t demand that its players have any knowledge of chemistry in order to participate. It provides enough information so that the chemistry can be considered, but it doesn’t rely on outside information of molecules or chemical formulas for the completion of its puzzles. Each level relies on the game’s own puzzle logic, which you learn as you play. 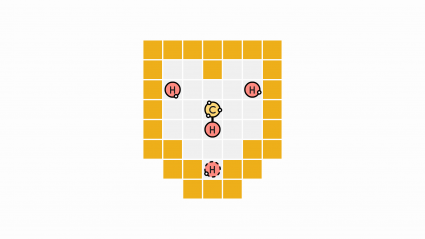 Oxygen
Like many great puzzle games, Sokobond succeeds by balancing straightforward gameplay mechanics with increasingly more difficult and more clever puzzle designs. It’s deceptively simple, and its gradual difficulty curve can be surprising. The game incorporates chemistry facts as rewards for each level you complete, and this, along with its frictionless retry system (press “Z” to undo your last move, “Y” to redo it, or “R” to retry the level), creates an encouraging atmosphere. Getting stuck on a puzzle can be disappointing, but this is not a game that wants to make you angry or frustrate you. It’s wonderfully peaceful.

That same mood informs its sense of progression. After the first few puzzles, Sokobond opens up into a more non-linear level-select system, which allows you to move between a few different types of puzzles at your own pace. This makes for a relaxed vibe. If you’re stuck, it’s easy to quit the current level and try a different one, and then another after that. After a few successes, you’ll likely have unlocked a whole new area to explore.

Each area of this map represents a new twist in Sokobond‘s core gameplay. One area introduces the ability to split a bond between two connected atoms, allowing you to navigate obstacles that two atoms couldn’t get through. Another introduces the double bond, which uses up multiple orbs with only one attached atom. Later, you’ll gain the ability to rotate the different atoms of a molecule around, which again affects your ability to navigate the levels. 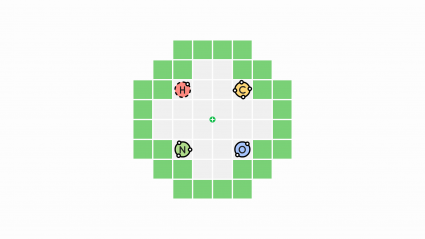 Each is a simple addition, but these additions shift the nature of the puzzles. The designers lean into these changes capably, taking full advantage of the new puzzle opportunities available to them. It leads to a rewarding sense of development and gradually increasing complexity, and each area’s puzzles feel just a bit different from their neighbors.

Carbon
Sokobond‘s creators make a point of describing the game as “minimalist,” and it’s particularly true in its visual presentation. The game has zero clutter, instead opting for clean lines and white space. Colors are sharp and distinct. There are few menus, no tutorials, and no eye-catching visual effects.

It’s an attractive setup with a modern sensibility, but it’s relevant to the gameplay. The minimalist design allows for easier focus, but it also means that each new gameplay element becomes immediately apparent. Visual cues concerning new techniques are easy to notice thanks to the lack of clutter on-screen.

Nitrogen
Sokobond‘s approach to music and sound (both created by Ryan Roth) is similarly minimalist, although its incorporation is so well done that it feels inseparable from the gameplay experience. The sound effects – from the simple click of movement (reminiscent of the great iOS game Letterpress) to the echoing chimes of each molecule’s creation – combine with the warm, ambient swirls of the music to create an almost rhythmic, musical gameplaying experience. Each time atoms are connected, those chimes play distinct notes and then build up sequences as more connections are made. 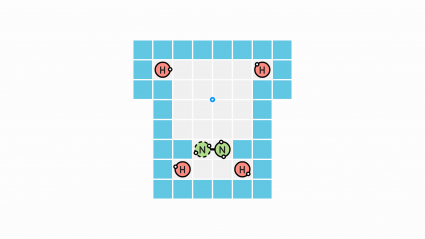 Once you complete a level, you’re rewarded with a bright pad sound that signals your accomplishment. It drifts into the main map music seamlessly. This all comes together to make for a mellow, peaceful atmosphere that allows you to remain focused and never distracts, but heightens your interest as you get deeper into each puzzle and each new area.

That’s all the elements I know
Despite my initial apprehension to its chemistry roots, Sokobond impressed me with excellent puzzle design and elegant presentation. I’m not very good at puzzle games, but I believe it gets sufficiently challenging for players more competent than me, and it remains intriguing and enjoyable throughout.

Puzzle games often come with a caveat, of course: if you don’t enjoy brain teasers, this one probably won’t change your mind. If you do, however, then Sokobond is a lovely, unique experience that makes the most of its simple formula.