A long time ago, in a galaxy not too far away from this one (because it is this one) I, like many Star Wars fans, got very excited at the prospect of playing a new Battlefront. The series was, in my opinion, one of the best Star Wars franchises to come out of Lucas Arts, and their dissolution came as sad news to all that were hoping the rumours of the in-development Battlefront III would become a reality. When EA took up the mantle of the White Knight to ensure a Battlefront release on DICE’s Frostbite 3 Engine, people were rightfully excited.

Since that initial announcement however, EA did what it does best by slowly and surely letting down its user base with news of less maps, less game modes and lower player caps. The final product has me mimicking my reaction to the to the Star Wars movie prequels: A sense of awe at once again being immersed in the Star Wars Universe, but also an uneasy hollowness, as it only digs superficially under the surface of the immense source material…

Installing Star Wars Battlefront for the first time readied the excitement I felt when I first heard of the announcement, as I was put into a game of Darth Vader vs. Rebels whilst waiting for the game to fully install. I found it interesting that they chose to let you play as a Hero character before the standard Imperial/Rebel troopers, as you will evidently spend most of your time playing as the latter in most of the game modes on offer. I imagine this decision was made for the same reason cults treat new initiates with tremendous generosity. It’s only when the recruits have their head shaved and contacts with the outside world severed that they then start receiving the ‘standard’ treatment.

Playing as Darth Vader effortlessly wiping out swathes of rebel soldiers with force-chokes and lightsaber throws was awesome as hell… for the first five minutes. It wasn’t until I realised that during this time, Darth Vader had yet to lose any health, which numbed my experience considerably. I felt what Darth Vader must have felt in those brief moments – complete desensitisation as the Dark Side of the Force took hold of me and my immeasurable power, leaving nothing but destruction and misery in my wake. Rebel scum fled to the various corners of the map to spare themselves a brief moment of survival before I, as Lord Vader, cut them down like younglings in a Jedi Temple. I grew bored, in other words. If that was a design decision in order to make me invested in Vader’s character-arch, then it’s genius. I highly doubt that though. 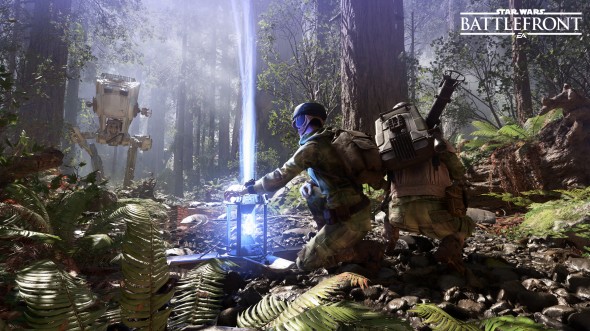 Where are those damn Ewoks…

It should be said that I was in awe at the level of detail that Dice had put into this multiplayer experience. The maps, character and vehicle designs are incredibe to look at in the Frostbite 3 Engine and nothing feels out of place. Running through the battlefield with the iconic red laser bolts flying over my head made me feel, perhaps for the first time, that I was actually taking part in a Star Wars set piece.

Even more nuanced subtleties help convince me that this is indeed a Star Wars game. From the famous George Lucas side-wipe transitions during a respawn and a faint (yet obvious) Wilhelm scream from a recently downed Stormtrooper not too far away, I was well convinced that DICE wanted to treat this property with all the love and care that it deserves. That maybe why settings from the movie prequels were left out, as the team didn’t want to muddy the gritty aesthetic of the original trilogy with colourful re-imaginings of the planet Naboo and *shudder* Jar Jar Binks as a playable character.

As with most multiplayer games, there is a ranking system in place. It’s almost identical to its Battlefield: Hardline counterpart where points are earned at the end of each match which can be spent on customisable loadouts. It works well if you’re only interested in using certain weapons, but at one point I felt that I had accrued too many credits so I was obliged to spend them on appearance and emotes, both of which are intrinsically useless, aside from being seen as a status symbol among the higher ranks.

While the multiplayer was fun for the most part, the single-player modes had a lot to be desired. With Training, Hero Battles and Survival Mode it seems that Battlefront could have benefited from a campaign mode. Not necessarily a lengthy one but enough for new players to get used to the different weapons. One thing that I didn’t expect was local co-op support in offline mode however, which is a massive plus in my book.

Another winning formula for Star Wars Battlefront is the quality of its sound design. Not only do weapons sound spot on, they feel just as powerful as could be expected. The same can be said for vehicles, especially the aircrafts. Whilst the range of vehicles on offer are limited, the overhead groan of a tie-fighter/interceptor is unmistakable and dogfights quickly became one of my favourite ways to play the game. 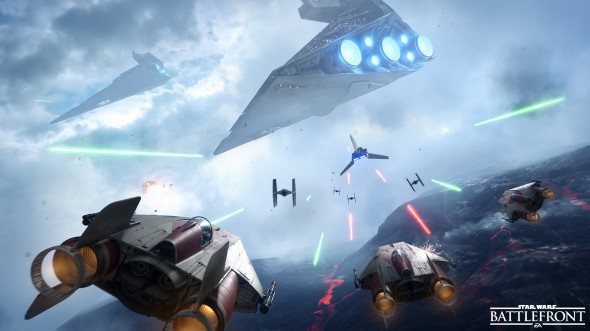 Vehicles, however, are not spawned on the map at the start of each game. They are decorated around each game map as tokens to pick up, along with other power ups littered throughout the map that can help turn corridor skirmishes in your favour. I say ‘littered’ because I found them hard to find when I started playing, and it became a case of knowing the map beforehand before I was able to experience the joys of piloting an AT-ST walker through the dense forest moon of Endor.

It can be a nice system offering everyone a fair chance of getting in a vehicle, unlike in Battlefield where everyone is scrambling for the only helicopter at the start of the game, however, two or three teammates are having a footrace to get to a token in the middle of a crossfire, which is both irritating and reckless (unless you’re on the opposing team, which means a couple of easy headshots).

Some of the game modes on offer are eerily similar to those available in DICE’s own Battlefield franchise. You have standard modes like Blast (Team Deathmatch) and Supremacy (Domination) but you also get modes like ‘Walker Assault’, which adds something different to the formula, but even this game mode has its issues. On paper, it’s most comparable to the ‘Payload’ mode from Team Fortress 2 and even then, it feels completely unbalanced.

The imperials have to defend AT-AT walkers whilst the rebels activate uplinks that temporarily lowers its defences, providing an opportunity for them to be destroyed before they reach their target. Depending on what map is being played, you can almost guarantee a win based on who you spawn as. On the Hoth map, the Imperials have the upper-hand nine times out of ten as there are two AT-AT’s to take down, but on the Forest Moon of Endor there’s only one, meaning all firepower from the Rebel teams can be focused on that and the Imperials aren’t likely to see an easy victory.

I’m sure this was done to reflect the events of the original trilogy but as a competitive game mode, it can be disheartening to know the outcome before the game lobby has even closed. 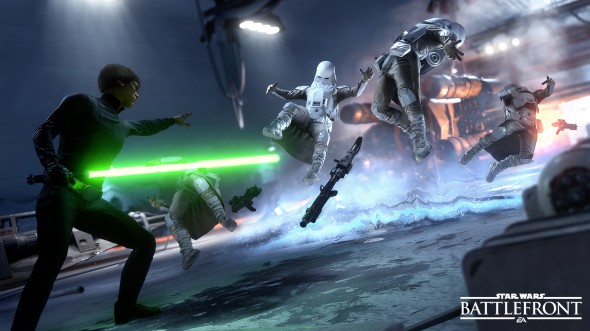 Use the Force, Luke…

Battlefront does return one staple to the series: Hero characters. This roster isn’t as large as in previous games, but they all play differently. There are three on each team; Luke Skywalker, Han Solo and Princess Leia for the Rebels; Darth Vader, Emperor Palpatine and Boba Fett for the Imperials. Each of these characters are significantly stronger than the normal foot soldiers, which is to be expected but they also have their drawbacks. The two lightsaber fighters, Luke and Darth Vader, can tear through enemies in a breeze and deflect laser blasts back at enemy players, which helps to rack up a satisfying kill streak. As a hero character, expect to have a giant target painted on your back as the enemy team will do all they can to make sure you go down and stay there. In fact, there is a whole game mode dedicated to it called ‘Hero Hunt’.

For what it’s worth, Battlefront deserves praise as a reasonably fun multiplayer shooter, but its longevity is questionable. Hopefully, coming up to the release of The Force Awakens, more maps will be announced that will delve deeper into the new lore, a playable Kylo Ren perhaps? The Battle of Jakku is currently available to those who preordered Battlefront, so it’s likely that this could happen.

Forcing it a little?

If all you need is a new Battlefield then this should sate that appetite. It should be taken with a grain of salt though. If ‘a reskin of Battlefield’ is your initial reaction to Battlefront then that’s unlikely to change. For the die-hard Star Wars fans, you’ve likely already grabbed this and let it eat you up like a Sarlacc pit.