I really don’t play my 3DS nearly as much as I should. I don’t think this is all my fault, though, as a lot of developers keep on making huge, sprawling epics rather than bite-sized chunks of joy that I actually have the time to play. If developers could bear in mind those of us that have full-time jobs, significant others and interests other than gaming in mind, that’d be great.

I say all of this because I’ve found that SteamWorld Heist is a perfect package in just about every way. It’s a perfectly accessible, turn-based strategy game, meaning I didn’t have hours of tutorials to work through. It’s perfectly suited to the 3DS, taking advantage of the layered 3D effects. On top of this, it’s the perfect length, meaning ten hours later and I’d seen and done mostly everything, leaving me completely satisfied.Heist takes place in the same universe as SteamWorld Dig apparently – I’m taking the Internet’s word as I’ve never played it. The basic premise is that you play as a steam-powered robot called Captain Piper. She’s the captain of a rusty old ship and the leader of a rag-tag group of space pirates. Not the nasty kind of pirates though; they’re more Robin Hood than Blackbeard. Wait – Robin Hood wasn’t a pirate…

Anyway, the story goes that the evil Empire-type robots are hassling the common-folk for more taxes and nasty pillagers are making life difficult too. Eventually you stumble across a great secret and fight an enemy worse than the one you know. It’s a pretty straight-forward tale, though it’s well written and your band of Merry Robots grows and contains some real colourful robo-characters. So what starts as a simple case of stealing from the rich to give to the poor ratchets up a couple of notches, and soon the fate of the known universe is what’s at stake.

The actual game plays out like a side-on and simplified XCOM. Each mission starts with you selecting who you want to take into battle, and from then on it’s a turn-based strategy game. The missions are semi-procedural, meaning the overall structure of each mission remains the same, but the layout of the corridors and enemies may change slightly. 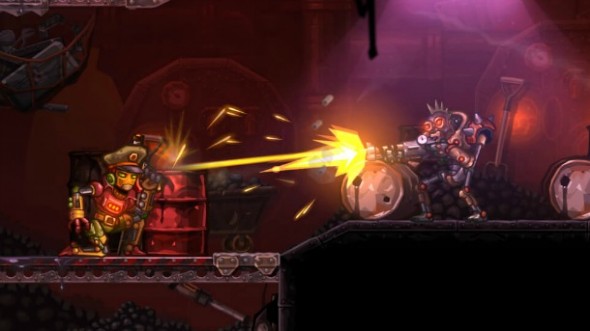 At the start of each turn you move your characters, often hiding them behind a barrel to give them cover from the enemy’s fire. Once you’ve moved you can, of course, shoot your own weapons.

Combat isn’t your standard strategy fare, where you’d normally expect to see a ‘%’ value pop-up over someone’s head. Instead you’re challenged with a feat of skill – you have to manually line-up your shot and press fire.

It’s super simple, as all you can do is angle your aim up or down. So the success of your shots boil down to how good you are at lining up your pistol. There’s strategy to be had here as you can take riskier shots by aiming at a robot’s head, and you can even show off your trigonometry skills by bouncing bullets off of angled surfaces. 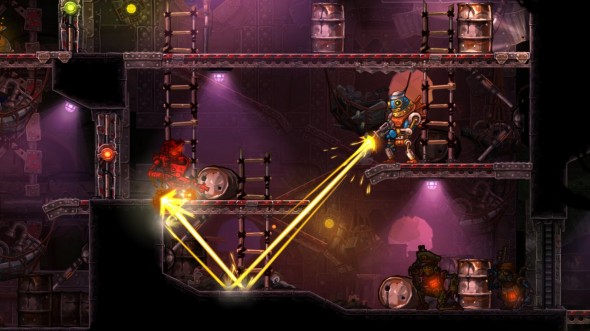 This is made easier by some weapons that have laser sights mounted to them and it’s also made more difficult by having some weapons with a spread to their shot. Some weapons don’t even fire bullets but launch grenades which can hurt your own team-mates. This variety might not sound like much, but it really makes a difference to how you play. On top of the weapons you can equip, you can also give your squad items too. These items can give you more health, let you heal your team-mates, or be grenades; they’re extremely useful and will greatly affect the way in which you play missions.

On top of the weapons and items altering how you play, the characters themselves have a huge impact on your play-style. Some characters are better suited to running in with all guns blazing, taking a few shots to their chest, whilst other characters will fare better sitting back and sniping from a distance. This is because each character has their own speed, health and strength values. On top of this, each robot can only use two different types of weapon, meaning your grenade launcher-toting tough-bot can’t use sniper pistols.

The final ingredient in this pick-and-mix of strategy is the enemies you’ll face. Some will rush you, some will hide and others have incredibly wonky aim. It all amounts to an engaging set of mechanics which compliment each other wonderfully. 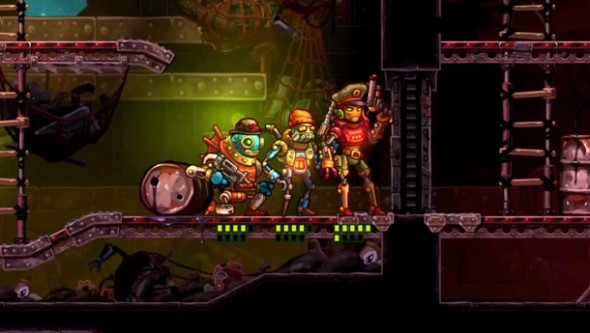 They all look different because they all play different. Makes sense, right?

After each mission you’ll be given a ranking, earn some XP and get some loot. Loot is simple enough, as it’s just a case of finding treasure chests throughout the mission. You pick it up and it’s yours. Easy. Then there’s XP, which allows you to level up so you get a boost to your character, while you’ll sometimes gain a special ability at set milestones. Finally the ranking process comes down to you not getting anyone killed, finding all of the treasure in the level and finishing the mission.

This minor RPG element is useful, as the one criticism I have is that there’s a slight ramp-up in difficulty towards the end. This means I had to replay a couple of missions to get some better gear and level up my characters. It’s not exactly a grind, but it certainly led to me repeating a few steps I’d already taken before.

Does it run out of steam?

SteamWorld Heist is fantastic. It revels in simplicity by limiting the number of characters you unlock, weapon types and the amount of loot you can find. Instead of these limits being a problem they’re a strength, as it means that each item, character and mission is well-crafted and fun to play in and with. SteamWorld Heist squeezes all of the fun it can out of its well-crafted systems and is a fine example of what can be achieved within the smaller scope of a handheld title.