It’s pretty safe to say there are operative forces in this world that act out in secret. If there’s one thing a wealth of TV series, films and books have taught us, it’s that. What those forces do seems to vary depending on who you speak to. The point is, they get the job done, and they try to do it making as little noise as possible.

Unit 13 is just such a task force. Sure, they don’t have Ross Kemp flashing his would-be-SAS badges around or Chuck Norris round-house kicking everything that breathes, but they’ve got an uncanny will to survive, and a serious wealth of firepower.

Great credentials for sure, but is theirs a secret a worth keeping?

9/11 put everybody on alert, and rightfully so. The world is very much a changed place since two planes literally collapsed the World Trade Centre. Unquestionably, nobody recognised that more than the US Government and it’s subordinates. So follows the fictional premise of Unit 13.

Recognising the rising terrorist threat, in 2001, NATO created Unit 13, a secret force devised to prevent, suppress and deny asylum to any individual or group who employ terrorism as a methodology. Unit 13′s directive sees them fight terrorists under the cover of stealth, but also acquire assets to permanently cripple their operations.

Players are initially thrust into the role of Animal, a Unit 13 Commando initiate, as he tackles a training course to prove his worth. However, throughout the course of the game, players will embody various different operatives depending on the type of mission they’re about to embark on. Unit 13 doesn’t have one set storyline; it’s split up into thirty-six different operations which vary in difficulty. Some of these missions do intersect and bare similarities to each other, but essentially, they are their own separate entities. 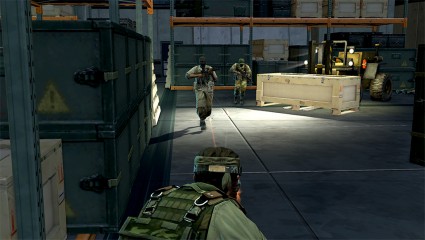 You are Unit 13. An invisible government agency.

On your feet, soldier
The good news is, Unit 13, like Uncharted before it, is all the proof you need a cover-based shooter can work marvellously on Playstation Vita. The dual-analog control-scheme is as responsive and fluid as any of its home-console counterparts, and it doesn’t feel like any restrictions or sacrifices had to be made in order to get it there. Perhaps it doesn’t have the technical gloss or bare-boned integrity of Gears of War, but Unit 13 proves itself as a showcase title all the same.

Gameplay depends on the type of mission you are attempting to undertake. Some missions are timed, and require you to deactivate bombs and gather intel before the clock runs down. Others allow you all the time you need to take down high-priority targets or infiltrate high-security facilities. However, Unit 13 forces you to play its content in some form of order as later missions are locked, and you’ll need to have completed earlier missions in order to access them. Still, you’ll never feel wholly committed to playing the game through in a single-sitting, as the missions are set up in such a way that the game almost expects you to exercise a pick-up-and-play approach.

As you might expect, missions do vary in difficulty in Unit 13, and will get harder as you go along. That said, the game always offers you a fair challenge, and completing the missions never seems like an impossible feat. Learning the map, and timing your approach count for a lot, and will, more often than not, lead you to victory.

It’s entirely up to you which operative you use on a mission, but the game will always give you a recommended option depending on the objectives. Yet, while the game does give you rules, it allows you to break them. Unit 13 operatives include a Technician, Pointman, Gunner, Infiltrator, Marksman, and Commando, and are levelled up as you earn points through the missions, with higher ranks giving them a range of new perks and attributes. Perhaps on later levels, you may decide to go with the more experienced operative, even if they aren’t the deemed the specialist option, due to their upgrades. Still, don’t expect the game to go easy on you if you do. There’s a reason it makes set choices.

Your progress in each mission determines how much experience you earn at the end of it. You’ll earn more points for effective, stealth based-kills and listening to the oracle’s advice. However, you can also earn added points for stringing together bonus multipliers. For example, if you kill an enemy with a headshot, and then continue to kill all your enemies with headshots within the short time-limit, your score will be multiplied by how many kills you’ve accumulated. As such, as long as you’re comfortable in an approach that resonates with espionage, the game will certainly reward you for it.

Unit 13 doesn’t just rely on the conventions of its cover-based brethren to make a name for itself, however. It also makes great use of much of Vita’s functionality. In addition to the dual-analogs, using the front touch-screen allows you to throw grenades, deactivate trip mines, pick up weapons from fallen bodies and scroll through many of the game’s menus. There’s also a wealth of online integration which I’ll get onto shortly. While the same is true of others in the launch line-up, Vita completely comes to life with Unit 13 in its cartridge slot.

When you’re done with the Solo Campaign, you can also try High Value Targets. These excursions are gradually unlocked as you earn stars via solo mission progress. The HVT missions see you fighting your way through a wave of enemies to reach a well-protected notable figure, renowned by the lofty bounty of his head. It’s your job to eliminate the target as quickly, and effectively as possible. 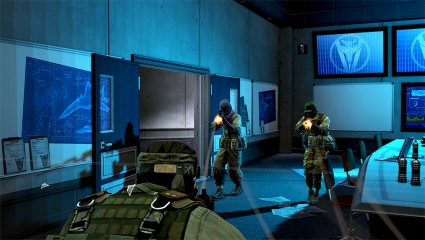 Environments are lovely and varied.

Will kill for stogies
I can’t say that Unit 13 is the most elegant looking Vita title. It’s not awful by any means, the character models are expertly designed, very distinct and well-animated, and the camera moves about the landscape very smooth and neatly. However, the backgrounds often seem slapped together as if the designers were in a bit of a rush, making them appear quite grainy in colour and blocky in structure.

It’s certainly not a game-breaking criticism, however. For a portable, Unit 13 is still an absolute delight to behold. What’s more, the game’s environments frequently change, with the operatives moving all over the world to fight terrorist plots. One minute you’re trying to breach a desert outpost, weaving in and out of huts, and the next, you’re fighting in a strobe-infested, neon-candy nightclub. You’ll certainly not grow weary of over familiarity here.

Another great feature is the mini-map. Too often in games you’ll find that the maps are overly confusing, or infested with meaningless keys, and areas of significance that aren’t really that significant. Unit 13 is straight and simple. You’re given the layout, the movement of your enemies and the direction they’re facing, whether or not they’ve spotted you, and your proximity to your objective. It’s effective, conveniently placed and you’ll find yourself using it more often than not.

Show up that Roswell crap to the black suit
Unit 13 is fully voice-acted, and always very crisp and clear. Gone are the days of muffled voices puffing out of mono-speakers. We’re dealing with high-definition quality sound now. Same with the music. Unit 13 has a full, hard-hitting, sometimes soothing soundtrack, and isn’t rife with quirky, screechy midi melodies.

What’s more, the sound can be key to your stealth approaches in the game. How noisy was your last kill? Will it attract attention? Will you need to find cover and hide? Using it in collaboration with the map makes your journey through each mission a whole hell of a lot easier. 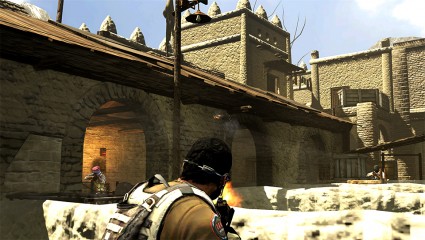 It's not quite as slick as say, Gears of War, but it's a cover-shooter that's worth your time.

Near. Far. Wherever you are.
However, the most impressive area in Unit 13 has to be its online integration. Clearly, Zipper Interactive want to make the definitive competitive playground for Vita owners, and show other developers exactly what Sony’s handheld is capable of. Providing you give it permission, every score you set on a mission is uploaded to the Playstation Network and compared with your friends, those near to you and the rest of the world. If you sucked, everyone is going to know about it. Don’t worry, though, whenever you’re on a particular mission page, you can look at your ranking anytime and, should you so desire, try to beat that score or time.

When connected to Playstation Network, Unit 13 constantly updates you with a live text feed running across the top of the menu screen, telling you what others have been doing in the game. This includes trophies they’ve unlocked, mission scores they’ve set, even if they managed to rise past you in the rankings.

What’s more, the game features fully integrated online co-op, allowing you to play any of the campaign missions together with another Vita owner. Adding two operatives into missions designed for one does make things a bit easier (even if more enemies are added), but working cohesively gives the missions a completely different feel, allowing you to cover different areas of the map so you can flank enemies and try new approaches. Speaking into the in-built screen microphone also keeps a communicative flow between players at all times, with player responses always sounding crystal clear. In fact, while playing, I didn’t encounter any instances of speech-stuttering or lag.

Another unique addition to Unit 13 are the Daily Challenges. Every 24 hours, the game’s server is updated with a brand-new challenge for players to compete against. These are usually time-based scenarios, but they do vary. Without question, this adds a whole other layer of longevity and continued use to your game. It’s a lot of fun to keep butting heads with your mates to see which of you is better on a particular challenge, and will surely see the game used weeks after you’re done with other content.

Unit 13 is chock-full of extravagant online integration, however, if I had to lobby a complaint, it does lose connection to the network far too easily. If you so much as allow Vita to power-save to the black screen, connection to Playstation Network will instantly be lost, forcing you to reconnect. This is something that can be easily fixed in a patch, I’m sure, but as I’m grading the game on what it is now, I can tell you that this quickly becomes very tedious. 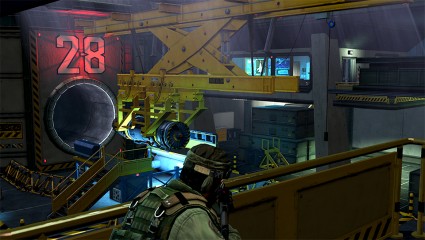 The multiplayer and social aspects are great fun.

Unlucky number?
Vita benefited from a rich, fulfilling and varied launch-line-up. It gave players so much choice, yet still managed to miss a game like Unit 13. Truth be told, though, this one was worth the wait.

Sure, the campaign lacks cohesion and has no follow-on story; it may not be the best looking game on Vita and there are a few online hiccups, but Unit 13 is an absolutely incredible technical achievement for any portable gaming device.

Handheld gaming has come a long way, yet Unit 13 remains a landmark title, bringing longevity, community and entertaining gameplay along with it.