Ask me what’s hot on Nickelodeon these days, and I’ll give you some narrow-minded, deluded answer like ‘Rugrats, surely?’ My aging vessel long since removed from vegetating in front of cartoons and children’s channels, I naively still assume I know what the current trends are. So, imagine my surprise when VICTORiOUS for Kinect and Nintendo DS turned up in my mailbox with Nickelodeon plastered on the front. Eyebrows quirked, brow furrowed, I asked the box art point-blank … ‘Just who are you?!’

When it didn’t answer, I was left with two choices. Wikipedia or morbid curiosity. Well, you can call it curiosity, insanity or something in-between, but regardless, I fired up the games and embraced the craze one Saturday morning. I was in an experimental mood.

Totally rad!
So, we’ve got a girl in a Hollywood Arts High School named Tori Vega. Tori is pretty popular at the school, the teachers love her, and she’s got a cool gang. The attention probably has something to do with her bona-fide talent and super-cool catchphrases like Whaz and VICTORiOUS (Get it? She totally slots her name into a winning slogan. She’s so bodaciously rad…). However, with great popularity comes great envy, and equally, Tori has her share of enemies, namely a girl called Jade West. Jade and Tori are regularly at each others throats, their bickering the source of most storylines in the TV show.

In the games, however, the focus is on you, a new student in Hollywood Arts High School. You’re here to make an impact with dancing, singing, guitar playing and yes, even burger cooking. Nobody can bring you down.

However, this is where the DS and Kinect versions of the game are slightly different. Where the DS version follows a set storyline split up into episodes, Time to Shine on Kinect is a complete free-for-all. Oh, and of course, there’s the difference between playing the game with a stylus or swivelling hips and waving your arms around in the air. 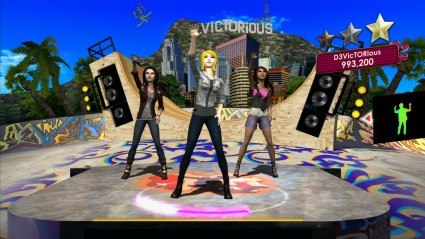 Ticket to ride
Essentially, both games are the same in terms of the games they offer, but the DS at the least tries to make something more of the source material by putting a story on top of it.

Time to Shine allows the player to perform dance routines, strum a guitar, sing songs and improvise with Kinect. Once they’ve performed each of these steps on a song, they can then gel them together and create a music video. The dance routines are a blend of Dance Central and Just Dance, but don’t do as good of a job of tracking you as either game. Unless you’re shouting at the top of your voice, Kinect doesn’t do a great job of picking up your singing voice either. The only thing that really seems to work well is the guitar strumming, which can actually be a lot of fun when you’re riffing away to some tracks. Essentially though, this is a jack of all trades, master of none.

Ironically, though, the guitar solos in Hollywood Arts Debut are its worst area. Strumming with your stylus always feels awkward and rarely accurate, and therefore means that achieving a perfect score is nigh on impossible. This ain’t how André taught you. Dancing is okay, breaking down into a series of timed screen taps with the stylus and improvisation is a dull mini-game of memory recall by choosing one of four buttons in the right sequence. The saving grace of this package has to be working the Asphalt Cafe, making sure customers get their food orders (bit like Kwik Snax). However, these aren’t impatient customers. They seem quite content to wait until you’re ready, so this isn’t really much of a challenge.

The game takes place in several different areas familiar to viewers of the TV series. From the Karaoke Doki to the Blackbox Theatre. I appreciate that at the very least, Hollywood Arts Debut tries to string this together with a story, even if the whole premise is a blatant excuse to set up mini-games, and is as engaging as watching a pre-Pentium era PC try to boot up.

Both games allow you to customise your character, with Time to Shine obviously offering much more range than it’s DS counterpart. While this doesn’t go into the brow definition or range between the eyes details of Skyrim, there’s a lot of choice available to the player to make the kind of character they’d like. What’s laughable, however, is that there’s an achievement for using a boy model in the game. I get that this is a show tailor-made for girls, but unlocking this felt more than a bit patronising, if not a tad sexist. Shame on you, D3. 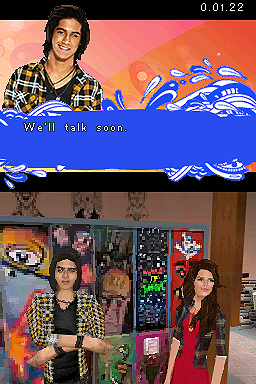 This is the DS version. That guy is so dreamy.

I’m having visions!
Neither game looks particularly appealing, quite frankly. Hollywood Arts Debut really exposes the age of the DS. The characters look grainy, blocky, and break down into a series of stunted animations, rather than the fluid standards set by its younger brother, the 3DS.

Time to Shine is obviously a lot better as it’s tailored for a home console, but still looks very bland compared to much of the 360’s library. The characters are a cartoonified variation of their series counterparts, and it’s always easy to tell who’s who and where you are. Yet, it’s not of a standard one should be expecting from a Kinect title, and looks like the Smackdown Engine circa 2006. Time to Shine appears rushed and almost thrown out of the door in time for release, even though the show has been doing the rounds for a few years now.

Sell out crowd
The quality of sound on the DS is dreadful; suffice it to say, you’d probably rather listen to a furiously meowing cat scratching a chalkboard. Equally weird is that throughout the story scenes in Hollywood Arts Debut, the game has actually included canned laughter, and usually after sections of dialogue that aren’t even intended to be funny. Unnecessarily authentic overload, man…

Time to Shine features the voices of all the main cast. Enthusiasts will surely recognise Victoria Justice, Ariana Grande and Leon Thomas III blurt out familiar catchphrases and words of encouragement as they make their way through the routines.

Both games don’t come complete with a particularly comprehensive library of songs (especially compared to those on Kinect). There’s songs such as ‘You’re the Reason’ and ‘Freak the Freak Out’ which will be familiar to anyone who has watched the show, giving the game an added air of authenticity. Still, when you consider the choice that’s already out there, VICTORiOUS exposes itself as a niche title only a select few could love. 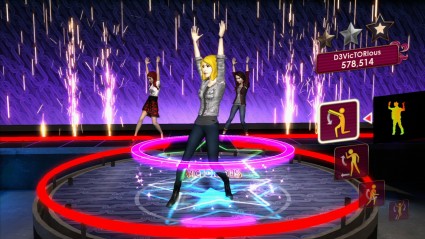 She's putting her hands in the air. I just don't care.

The worst couple
Both games face incredibly stiff competition on their respective formats. Kinect has a wealth of brilliant dance and singing titles already, and the same can be said of the almost retired NDS. To be honest, even if you’re a fan of the show, there’s not a lot to recommend here. What the game offers isn’t well designed, doesn’t do a great job of involving other people and quickly becomes tedious. With little sign of forthcoming DLC, limited appeal and better titles at a similar price, neither of these titles are an attractive investment. Totally Whaz, man…