I am an easy-going, affable guy, but there comes a time in every man’s life, where he has to be more assertive to avoid people taking advantage of his kind nature. Just lately, for these reasons my love of gaming has been put to the test. The aspect of escapism is what has always drawn me in and, of course, we all love to be the hero, but it seems to me, however, that the other characters in games are, to put it bluntly, not carrying their weight. I’m not going to take it anymore!

My love affair with the Marmite zombie adventure game Dead Island was a fairly brief one, when I took offence to several of the characters being more dead and lifeless than the zombies themselves.

For a few moments, try to imagine being trapped on the island of Banoi for real. Every step you take ends up with hundreds of zombies attacking you, but you stumble on a gang of survivors and suddenly you have the feeling that if we all work together, maybe everyone could actually get out of this mess alive.

With this in mind, what would you do in your hour of need when the new friends that are your only hope for survival, suddenly started making you their glorified errand boy?

Hank wants spark plugs, Mike sends you off for gas, Jack sends you off for medical supplies and Jeanine would like you to get her necklace she forgot in her bungalow. All the while, they all sit safe and have a nice chat about the good old days. I can’t speak for you all, but I would be telling Jeanine as politely as possible to piss off as there was more important shit going down on this cursed island than her crappy necklace. 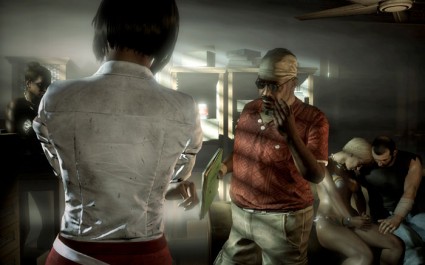 We are going to stay here because its safe, but can you fetch us lots of stuff?

As for the rest of them, they can get off their fat asses and give me a hand fetching supplies rather than sending me on a one way trip to palookaville. I bite my tongue and carry on regardless, because it’s just a game, right?

Enter Mike, an Iraq war veteran pumped up and excitable, which may have been down to taking a little too many steroids like our old friend Brucie Kibbutz in Grand Theft Auto, but he also seems to be suffering from obsessive compulsive disorder. Why? Because he won’t shut up about the smell of dead bodies and wants to watch them burn, so sends me on a mission to get some gasoline.

I go out there all on my own, fighting off zombie hordes to get the required gasoline, whilst the so-called tough guy stays at base camp. Even the survivors at the petrol station do nothing but hide whilse I risk life and limb to fill up the containers. Against all the odds I make it back alive and Mike says to me “You took your fuckin time!”

At this point I ejected the CD from my console and shouted at the screen. “Took my time, Mr Tough guy Iraq war veteran? You sat there on your steroid ridden cowardly ass and that’s all you got to say?” This is where my vacation on Dead Island ended and I don’t care what happened to any of the slackers on that damn island.

A few weeks have passed and I rediscovered my gaming mojo when picking up RAGE from id Software. I quickly forgave the all-too familiar formula of futuristic adventures which must contain words such as “ark” and “cryogenics”, as I was being rescued by Dan Hagar. Dan, the founder of the Hagar settlement, is voiced by John Goodman, which quickly brought back very fond memories of Walter Sobchak in the film The Big Lebowski.

My patience was about to be tested once again because Dan was simply going to send me on several suicide missions on my lonesome, while he relaxes with a glass of whiskey in a dirty glass. “Here we go again” I thought, as more people started asking me to find buggy parts. I had to take a break at this point, and although I will return to the Wasteland, I will need to recharge my patience again first.

The growing trend in games seems to involve a gang of redundant characters sitting down and telling you to jump through hoops fetching them stuff. I don’t mind doing my bit, but the very least they can do, is accompany me on the journey and watch my back along the way. Traditionally gaming characters have not been much use and have opted to stand by your side shooting at nothing, but at least they are trying, god bless them.

If this kind of lazy behaviour was to occur in real-life and people were to ask you to fight fifty bad guys on your own just to collect trivial items for them, while they sit down with their feet up, what would you say? You would obviously ask “what exactly are you going to be doing whilst I risk my ass?”, so why do it in a game?

Am I over reacting or does anyone else get frustrated at lazy gaming characters?