Bloodborne: Why death in games can be your friend, not a punishment…

People have always talked about ‘difficulty’ when it comes to From Software’s Souls series, and the topic has arisen again since their latest game, Bloodborne recently hit shelves. From reading about From’s work on the interwebs, I’ve always been of the impression that beating their games is an act of endurance, a pastime for sadomasochists, something only enjoyed by a tiny subset of people. True to form, I’ve seen many people in comments threads over the last month claiming to give up on Bloodborne after as little as a few hours, not even making it to the first boss. Still, there was something about the general chatter that I just wasn’t able to ignore, and I caved.

Having never played From’s prior games, I have to admit that I wasn’t precisely sure what to expect going into it. I’d always been curious about Demon’s Souls and Dark Souls, such has been the buzz around them, but because of folks’ focus on difficulty I just never believed that I’d get on with them and thus never bothered. I think I expected that Bloodborne would be brutal and punishing, a soul-destroying experience that expected me to land every hit with fighting game precision or die and lose everything I’d earned. Yet, while it never once held my hand, instead preferring me to feel and figure things out for myself, it proved nothing like those preconceptions.

Okay, sometimes, it is like that, I guess. A mistimed attack, especially against an enemy you’re not familiar with or ready to face yet, can certainly see you slain and your unspent Blood Echoes (aka XP/currency) taken from you in an instant. Having now finished it and being well on the way to finishing it again in new game plus, it wasn’t the enemies or even the bosses that led to the biggest challenge for me: it was merely in coming to terms with the game’s rules, the risks and structure in the early stages.

Bloodborne, however, doesn’t really waste time in putting you under pressure. Initially, it pits you against four weak enemies in a row, before abruptly ramping up the difficulty and confronting you with an entire army and several large monsters. I died a lot in the first night, never actually getting to see the opening boss (which, as it happens, would have provided a good, mechanical advantage). What I did achieve, however, thanks to death causing the immediate area to ‘reset’ exactly as it was before, was memorising the areas where foes lie in wait and jump out, how to manipulate large groups to attack one or two at time so not to get overwhelmed and, of course, I was constantly learning the subtle nuances of combat.

Put simply: every time I saw ‘You Died’ appear on the screen, I was learning something new.

It occurred to me that I’ve not only experienced this process many times over, but actually written about it indirectly in an article for IGN where I spoke of how death in Spelunky pulls the rug from under you whereas in other games, such as Super Meat Boy or Hotline Miami, death is not really a punishment for failure, it’s what teaches you how to play. Death in these games really is your friend; it’s the tool that will help you to eventually overcome a level as long as you can understand the reasons why you died.

When you clear a level in Hotline Miami, for example, it’s because you died umpteen times before. Without realising it, every death subtly changes your approach, and before you know it, you’re clearing the level with almost clinical precision. Learning from your failures is what got you to that point. 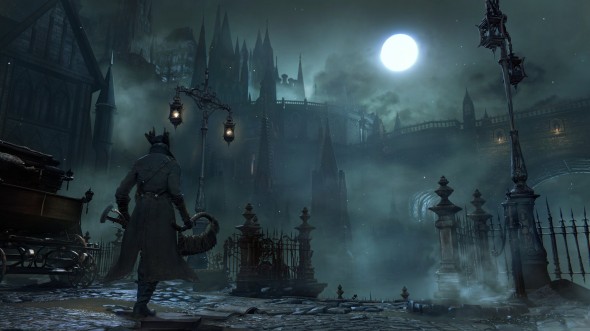 This, of course, isn’t new. It’s the same reason that I can get through a massive portion of the original Super Mario Bros. without even really thinking about it. Even to this day, I instinctively know when to jump to land on the first Goomba in 1-1; I can sprint the entire way through a lot of the levels without really concentrating, avoiding drops and enemies all the while. How is that possible? It’s because, as a youngster, I heard Mario’s death march literally hundreds of times prior. I subconsciously know the pitfalls and where they are because of it.

What I didn’t expect was that Bloodborne would also fall into this category; the core principle is exactly the same. Although you will die a lot initially, you’re actually learning heaps about what killed you and, with some perseverance, a problematic section can become second nature in much the same way.

In the early portion, for example, by the twentieth time of trying to work my way through Central Yharnam, the fact that I was doing it effortlessly, automatically even, almost passed me by entirely. By the time I died to the brick-wielding ogre one door over, I was flying through the prior area every time with confidence and ease, a far cry from the constant suffering the night before. When I eventually overcame the Cleric Beast waiting for me at the end of the area after our fourth battle, it was only possible because of prior suffering. For that it felt all the more rewarding.

That was the watershed moment for me. When the Cleric Beast fell and I had overcame what once seemed insurmountable, that’s when it all fell into place structurally in my head and I knew what this game was all about. I’ve been dying a lot less since simply because that repetition has meant I understand the rules better, and when I do hit a wall, I know it won’t be impossible forever; I just need to work at it, learn from how I died, and then the answer will come with persistence.

In Bloodborne’s case I thought of quitting it a couple of times the first night, I admit, and like some, nearly declared that it was just not for me and moved on. Yet the breakthrough came when I finally stopped thinking of death as a punishment and came to regard it as more of a lesson. Every setback is just another step on the path to victory.

I’m sure there’s a moral in there somewhere.