I remember 2am, and my sister furious because my mom and I were still playing Tetris Plus on Sega Saturn at the foot of her bed. She had a Saturn, I had a N64, and we had a lot of fun gaming in my house when when we were kids.

After many console-less years, my sister finally bought a Wii U, though I may have insisted a bit. I came over one day and we played New Super Mario Bros. U for a couple of hours and it was incredible. It had been years since we had so much fun gaming together.

Unfortunately, we live very far apart and the games she has, including NSMBU, are not playable online. It wasn’t until recently that we found something we were both excited to play that was also playable online. Cue Dr. Luigi and its online Battle Mode! We have so many great memories of playing Dr. Mario on the NES that we could not wait to play Dr. Luigi. 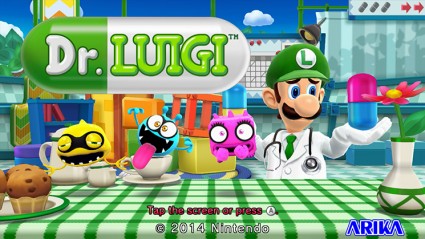 It’s important to bring up again that my sister does not really game any more so I was concerned that a digital-only, online Dr. Luigi might be difficult for her to set up. Well, it didn’t take much for her to make her first eShop purchase and start practicing in preparation for our gaming sessions. So far so good Nintendo.

When we finally got online, the first thing we tested was Wii U Chat. It works great, the audio quality was good, the camera worked fine, and we were having fun drawing on the Gamepad. Then, when we tried to open Dr. Luigi, it dropped our Wii U Chat connection. I expected this, so I called my sister by phone and walked her through how to set up an online battle. While Wii U Chat is great, it was immediately apparent that talking on the phone was much simpler than entering Wii U Chat if we wanted to play because we couldn’t discuss anything happening outside of the app.

Dr. Luigi also has no options for chatting in-game, so we stayed connected on our phones. The closest you can get to in-game chat is to pause a game if you have an incoming Wii U Chat call, keep the game in the background while you chat, and then come back to the game. Since we can video chat and talk on our phones I can guarantee you that we will never use Wii U Chat again. Why bother?

Finally, I hosted a game and my sister joined me. We chose a level to play on, and hit start. Everything worked great! We had tons of fun and it felt like we were kids again playing Dr. Mario at home. It was actually very easy to set up and everything felt simple. Actually, everything was too simple.

It’s so simple, your grandfather can do it.

This is why it bothers me that Nintendo is still reluctant to embrace online wholeheartedly. Wii U Chat comes with the console and it works well, so Nintendo obviously has the technical capabilities to pull this off but because they want everything to be so simple they made an application that is almost worthless on a console.

“Simple” also perfectly describes Dr. Luigi’s online battles. When you choose your mode you are stuck with it. If you want to make any variations to your game you have to sever the connection entirely and one of the two of you has to choose to host a game again. In this case, simplicity leads to making everything much more complicated. This is where my sister began to comment on how it made no sense. If we are already connected and playing, why do we have to connect again? There were times when we opted to keep playing the same mode although we wanted to switch, just to avoid having to disconnect. Did I mention that my sister hasn’t played video-games in years? Even she thinks Nintendo’s online structure is lacking.

Nintendo has made the process of setting up a game very easy and playing Dr. Luigi online worked flawlessly, but with zero voice chat and no way to stay connected, it feels like the company actually does not want to recreate the “couch” online experience.

Honestly, playing while on the phone is not bad at all and for my sister and I it’s sometimes preferable because we can talk, play, stop playing, and continue to talk. Yet I doubt that Nintendo had this scenario in mind or that the company would admit to doing anyone a favor by omitting voice chat.

My point is that my sister is (now) among the most casual of gamers and she realizes that online play is not very good on the Wii U. It’s actually better than it has been on any Nintendo console to date but that’s not enough. When someone asks me which option allows for a better way to play with friends and family that are far away, I tell them to look at Xbox Live and the Playstation Network.

Nintendo: We want to play your games online but if you don’t fix things soon, next time I’m telling my sister to pick up a PS4 or Xbox One and we’ll settle for playing Tetris.