The art of the sequel

These days, pretty much every game is getting turned into a franchise. In a similar vein to the movie industry, if the ratings look good on one game, you can bet your bottom dollar that the publishers will be pushing for a sequel, trilogy or series to milk a bit more moolah out of. Expectations are always high when the next game in a series gets closer, and making the sequel “bigger, better and more badass” won’t cut it all the time (even though it did with Gears 2, Cliffy B is still a moron). I know that I have very high expectations from the likes of Modern Warfare 2, the next FIFA and games much further down the line such as Max Payne 3, on the merit of their predecessors alone. So I’ve been thinking about a few sequels that have either lived up to my expectations, or crushed them like a giant ant between Cate Blanchett’s thighs (just watched Kingdom of the Crystal Skull again, it’s classic Indy no matter what anyone says).

Prince of Persia: Warrior Within
Now, I thoroughly enjoyed playing through all of the Sands of Time trilogy of the Prince of Persia series. The gameplay was excellent but Warrior Within is so detached from the rest of the series that it could be treated as a completely different game. I liked the fact that the game had a distinctly Arabian style, with the appropriate music and mummies spewing sand whenever you dispatched them. I could still live with the fact that WW saw that replaced with enemies that essentially exploded in an orgy of blood, screaming and heavy metal music.

What did bug me though, is that the Prince himself was turned into an almighty tosser in one fell swoop. In the first game the Prince was cheeky, naive, charming and just a tad greedy (Ok, a lot greedy, the whole sorry mess was his sodding fault). In Warrior Within, I actually had dreams of Ubisoft grabbing the Prince, melting him down and forcing him into a “badass” mould and then turning up the heat until something sufficiently horrible came out. 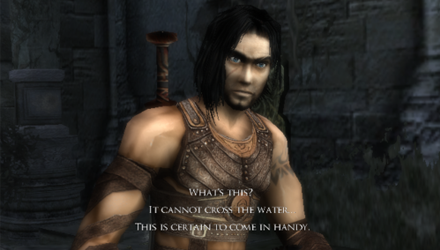 A sentence with no swearing!? How the hell did that get in there?!

I couldn’t believe that the Prince’s innocent charms were gone. No more cheeky winks heading Farah’s way in Warrior Within, this time I sat open-mouthed as he got scratched in the face by a leather clad warrior woman and unleashed a volley of abuse that would shock the most hardened of Glaswegians:

Moral of the sequel: No extreme makeovers for the characters between games (also refer to Dante from DMC2, he sucked).

Call of Duty: World at War
After being completely blown away by the Call of Duty franchise’s first attempt to step away from battles that happened over fifty years ago, I was pretty disappointed when it was announced that the game would be returning to World War 2. Even though the battles had shifted to the Eastern front, the game was still regressing to a war that I was frankly getting bored of winning. My cynicism shot up even more when I found out that Infinity Ward would be taking a step back to let Treyarch massacre the game engine like they did with Call of Duty 3 (although I can forgive IW considering they were developing Modern Warfare 2, which is clearly going to be uber).

To be fair, World at War was fine, good fun, but it is just Modern Warfare’s game engine, fifty years ago. I can imagine how Treyarch’s brainstorming session went down at their HQ:

“Ok guys, people loved COD4, so let’s copy as much as we can from that, but we’ll set it in a different timeline so no-one will see the similarities. Here’s the selling point though, and this will blow your goddamn mind. Fire… and lots of it.  Hot fire that lets you burn things. Oh and Jack Bauer.” *Applause*

About a week and a half of development time later we had Call of Duty: World at War. About a year after that I’m still playing Modern Warfare while World at War lies uncompleted with so many things left to go up in flames.

Moral of the sequel: It’s not spot the difference, mix it up a bit.

Deus Ex: Invisible War
The first Deus Ex was the first time I had experienced a first-person RPG. Until I had played it, it had never even occurred to me that a first person perspective could be combined with RPG elements at all, certainly not as well as Deus Ex had done. Undoubtedly the most impressive aspect of the game was the (for the time, and to an extent today) impressive range of choices you were presented with. You weren’t just given a selection of two or three dialogue options which would shape the story; you really could go about every mission however you wanted. Ion Storm put a lot of effort into giving you at least a few different ways of going about a task, and you could play the game time and time again and still find new ways of doing things.

So of course the logical step with a sequel is to take away that kind of choice, water down the character levelling system and replace it all with some shiny new graphics and big guns. While the story of Invisible War still involved uncovering an interesting conspiracy, the gameplay itself was very linear and pretty much pissed all over what made the first game so great. I often found myself spending five minutes looking around every nook and cranny to find some ingenious method of getting past the waves of enemies that were placed in front of you in droves. Unfortunately, in Invisible War it never got any more ingenious than shooting them quicker than they could shoot you, and I was usually left with a weird feeling of guilt as I stood in the middle of a pile of recently massacred enemies.

Moral of the sequel: Don’t dumb it down; a more commercially appealing game is almost never a better game.

Gears of War 2
Even though, as I already touched on it earlier, I feel an unexplainable bloodlust every time any Gears of War marketing videos are brought to my attention; Cliff Bleszinski knows how to get people excited about a game. The first Gears of War almost perfected the cover mechanic and it’s pretty much the benchmark that all games try to live up to now. I can’t imagine the game being anywhere near as popular if it wasn’t for the unashamed ass slapping machismo that is ladled onto every part of the game. With each piece of press followed a pretty predictable formula:

“Would you look at the SIZE of those guys?! His arm is bigger than my whole body! Your guns have chainsaws attached to them for Christ sake what more do you want?! Look, just watch this video of something get cut in half and buy the game you pussy” 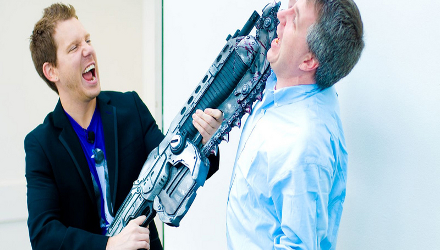 "You still think we should tone down the violence in Gears 3!? WELL!?"

It worked! So with Gears of War 2 all that was really needed was a healthy injection of testosterone to get everyone anticipating the game again, and Epic Games certainly delivered. None of the existing gameplay had really changed, but everything was just made bigger. It seemed like each new weapon left even less of the enemy behind after you had used it on them. Battles were bigger and of course, you could prove just how much of a man you were by defeating an alien in a chainsaw duel. Why? Because it’s f**king hardcore that’s why!

I do wonder how much further Epic can take that aspect of the Gears franchise though. I’m half expecting to see a Top Gun style shower scene in Gears 3, with Marcus getting rat-tailed by Dom while he kills countless Locust with dual wielded chainsaws (SURELY the next step that will be taken), as Baird and Cole Train double-team some cheerleaders in background as Cole gives his usual whooping laden smack talk. Watch this space.

Moral of the sequel: Play to your strengths, no matter how banal they are.

Pro Evo 2008 saw Konami’s first real attempt (a lot of emphasis should be focused on attempt) at a next gen Pro Evo title, and I thought the fast-paced gameplay was actually pretty awesome. Unfortunately, as I’m sure anyone who has ever spent five minutes with this game is aware, the online aspect of the game was completely and irrevocably broken. How Konami had the balls to release the multiplayer in the state that is was is beyond me, it just did not work. A quick search of youtube will give plenty evidence of this, and I will give a sizable amount of cash to anyone who can decipher what the hell is going on here. *

So Konami faced a backlash and had to get back to the drawing board quick, since these days, a football game without an online element is like Cristiano Ronaldo with bi-hourly doses of ultraviolet radiation, it dies without it (biological FACT). Despite the soul crushing disappointment of 2008, the excitement levels for 2009 were still very high, especially since EA Sports were finally offering just as attractive a package. So on October 17th 2008, we were all treated with a brand new online experience that was… marginally better!!! Oh my god they’ve done it thank g…wait, it still sucks quite a lot? Just not as much? Oh, I wonder what FIFA 2009 is like. Despite trying my best to persevere, Pro Evo was replaced by FIFA soon after, and I haven’t even thought about dusting off that Lionel Messi branded box ever since.

Moral of the sequel: Heed the criticism!

*It should be noted that as a stingy Scotsman, I regard anything over 59p as sizeable, but that’s irrelevant since I’m also a pathological liar and in fact won’t be paying a penny.