The calm before the storm…

Skyloft. Wow. I am enamoured. A beautiful and charming city in the sky, inhabited by quiet, noble people with proud traditions and beliefs. It’s hard not to fall in love with the place because exploring the quaint little city is a pleasure, with humble folk at every turn who, for the most part, are warm and welcoming to the young hero at my control. Why can’t real cities and villages be bubbling over with charm like this? With this much innocence? I didn’t want to leave!

With that, it surprises me that some have called the opening few hours of Skyward Sword ‘slow’, even to the point of being put off by it. To me, the opening is one of the key elements of the game’s setup and possibly the most important start in a Zelda game yet.

Back in ‘98, Nintendo had handled things a little differently with Ocarina of Time (my personal favourite in series, if you’re asking). At the start, Link was the Kokiri Forest outcast, bullied and derided by most in his immediate community. We’ve all felt disaffected and alone at one point or another; it’s something we can all relate to, only what endears you further to Link in this iteration is the fact that his spirit is so strong. Where he came from didn’t really matter to the gamer; it was his growth and strength throughout that mattered, his embodiment of pure grit and determination that led us to enjoy his story and eventual victory. It’s a grit and determination that we all wish we had in our weakest moments.

As well as this works, it’s relatively easy to evoke reaction and connection with the player in this way, something that’s been very much overdone since. It’s much harder to evoke emotion and reaction by giving the player something to lose.

Staying with the Zelda analogy, When Wind Waker came in 2003, Nintendo went with an approach that’s not unlike their recent work in Skyward Sword. Link on Outset Island was not only cherished and loved dearly by his Grandmother and Sister, Aryll, but a valued member of this small, close-knit community. Nintendo went a great length to make you feel a part of this homely island too, and for me at least, this approach worked wonders in contrast.

Where Link’s outsider status in Ocarina had me desperate to get going on his adventure into Hyrule, the slower pace and more welcoming nature of Wind Waker’s opening had me not wanting the adventure to even start. Everything was so comfortable and perfect on that island; knowing that something was going to come along and upset the balance was a real killer for me.

It sounds silly, but this direction was crucial. By taking the time to make you feel comfortable in the protagonist’s life, even leave you humbled early on, when Link’s sister is taken from him it makes his plight far more real. It gives you a feeling of real purpose and investment in playing.

Watching TV with Jenny in The Darkness; walking through the Tibetan village at the midway point in Uncharted 2; sitting in your girlfriend’s bar in Prey; playing fetch with DOG in Half-Life 2? All relatively spoiler-free examples where games just would not have had that same impact had these more thoughtful, action-free periods not been included. Action-free moments that, on face value, would seem quite dull without their true context. 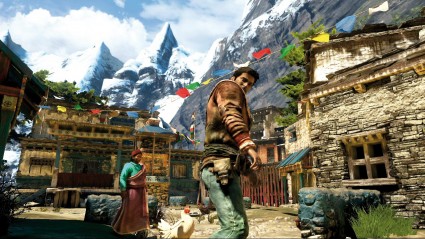 This well-placed moment of calm made what followed all the more important.

With this, my point becomes evident; slower, moments of calm and serenity in any game can be just as important to the player’s experience as any amount of the balls-to-the wall action that follows or sandwiches them. Just because you’re not always engaging enemies all the time, doesn’t mean a game can’t have an effect on you in other, more meaningful ways; and in the examples I’ve mentioned, they’ve only served to enhance the experience.

Where I’m going with this, is that just like the examples above, Skyward Sword’s slower start is not a problem with the game, but an important plot device. While once again the hometown is quaint and charming and Link is mostly respected amongst his peers, the game makes a point of making the floating island feel like home.

This is something that can only come from a slower starting pace, and allowed the developers to really establish the relationships in which Link finds himself a part of, most notably with Zelda, her Father, and his mentors.

As a result Zelda (especially) has been fleshed out a lot more here (even more than as Tetra in Wind Waker) and for good reason. The game aims to make you, as Link, feel closer to her and her family than you ever have before. She’s no longer just a random, regal figurehead with no personality that exists solely for the hero to arbitrarily rescue. This time, more than ever, she’s a real character as important to the story as Link himself. All because they took the time to introduce her in the right manner.

By seeing much of their relationship and way of life on Skyloft as intimately as you do, with real depth and context, the gaping void left by her disappearance shortly after feels infinitely more brutal and damaging. That’s why it exists, why they spent so much time showing you their way of life and the pair’s partnership; it showed you what Link stood to lose. The game’s story, and your purpose as the player in it, is so much more meaningful for that.

Sometimes, just sometimes, an occasional slower pace can make a game’s action feel all the more relevant. Skyward Sword is just one such game.