A Q&A With Dishonored’s Art and Design Directors

Speaking at a recent event, Sebastien Mitton and Viktor Antonov talked about their newest project, Dishonored. Due out this week, Dishonored has rightly gained a great deal of attention and this is in no small part due to the game’s striking and original style.

Spending a bit of time with the talented duo, we were given an insight into the development of the art direction, the design process and just how it all fits into the game.

Make sure you check out Ray’s review here!

The first thing that both Sebastien and Viktor are prepared to admit is that working on a ‘AAA’ original IP is a rare opportunity, for which they’re grateful. Having such high expectations and such a large budget produced its own problems though.

It was explained that a tightrope of design had to be walked. You see, as important as it is to have something completely original, it’s also key to remember that games have to make a profit. Especially ‘AAA’ games. Creating a game that’s truly got its own identity and is unlike anything else can be a hard sell. This is why the designers have loosely based their dystopian future on London, as they feel that the city has a world-wide appeal and instant recognition. 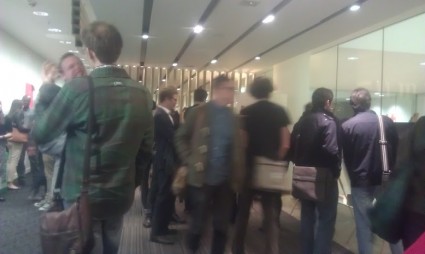 I say ‘loosely based’ as the extreme lengths that the duo and their team have gone to in order to create this world and make it their own, is staggering. With the design process producing upwards of 3,000 pieces of concept art and taking nearly 3 years, it’s clear that Dishonored took its pre-production seriously.

Viktor is no newcomer to the business of designing game worlds, having worked on Half-Life 2 and being credited with the stupendous ‘City 17’, it’s a bold claim to hear that Dishonored has had the ‘biggest pre-production’ process of any game he’s worked on. It’s not just his time in the games industry that is aiding his work on Dishonored. With a background in drawing industrial concept pieces, you can see that his work contains a believability, even in the grandest and most outrageous of his creations. 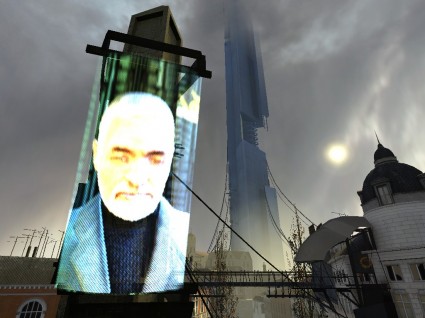 It’s this ‘hyper-realism’ that allows people to become not just enveloped by the game, but by the world the pair have created. The duo claimed that a real sense of excitement comes from discovering ‘new places’, though the invention of the internet and Google has taken this away from most of us. Want to know what it’s like to walk through Tokyo? Jump onto Google maps and you’ll have a pretty good idea. Any major city in the world will have a collection of documentaries dedicated to it and we’re all being bombarded by images of the world’s most interesting ‘places’ whether we like it or not. This sense of discovery, according to both Sebastien and Viktor, is now most easily found within games and within this game in particular.

It may seem that a lot is being made of Dishonored’s world, though a fair point was made to make it clear why so much has been invested in the locations of the game. Within films, Viktor explained, you spend two hours looking at characters, watching them interact with each other and will occasionally get a panning shot to help understand where this interaction is taking place. With a game, you’re looking at at least six hours to complete the story. With a game, your main interaction is with the game’s world. With a game, you’ll be traversing locations, occasionally ‘interacting’ with other characters (read: shooting, punching, stabbing, etc). This puts a great onus onto the design of the world. A well designed location can tell a story, keep a player engaged and set-up fantastic moments of action. So how did they create a world that does all of this?

Trying to avoid clichés within their work was the main aim. They set out to create originality within their work by using only paintings as their references and never photos. They were also keen to avoid bland-looking characters or environments, so a trip to both London and Edinburgh ensured that everything you see in the game is based or derived from something, or someone, that they saw on their trips. A lot of the characters in the game really stand-out. This may be due to the fact that the people seen in London and Edinburgh have ‘smashed-in, nice, strong faces’. Being shown photos of people they ran into, such as a burly bouncer, it’s fair to say that ‘smashed-in’ and ‘strong’ are a good choice of words. 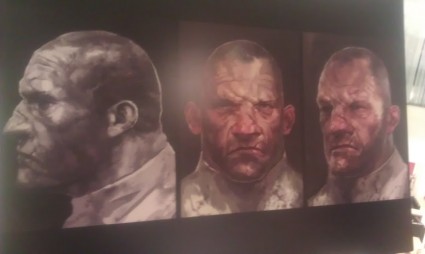 Naturally, all of this design doesn’t take place in a vacuum, as there are those pesky game designers to deal with. Luckily, a healthy relationship exists between the two departments, with one feeding into the other. The designs of the duo contained a ‘verticality’ within their concepts, which has found its way into the game’s levels. Conversely, as soon as the artists realised you could posses a rat, more time was spent looking at the table legs and air vents of the world. With the game designers and artists throwing ideas at each other throughout the development process, it’s safe to say that the two meld well together, creating a harmonic playing experience.

How can we be sure of this? Having played the game at Eurogamer Expo, we were already pretty sure of the quality of this upcoming title, though this was further confirmed as during the evening’s chat a level was demonstrated for us.

Taking place in a well-to-do aristocrat’s manor during an extravagant party, the visual flair on display was stunning. Starting off in a wooden boat, the player creeps out onto the filthy streets. Hiding in the gutter, surrounded by guards, Corvo used his powers to stop time, teleport short distances and summon  a horde of hungry rats. Not a nice way to go. 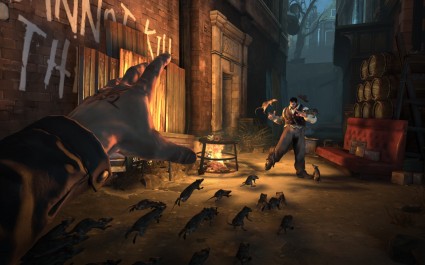 Further proof of the range and quality of design within the game was shown as the mansion contained a labyrinth of rooms, lofts, cellars and air vents. This was not just for show, as each mission within the game can be tackled in a huge number of ways, especially when you consider the variety of the player’s powers.

Meeting and interacting with a wealth of interesting and visually striking characters, you soon identify your target. The person in charge of demonstrating the game decided that it was time to end the stealthy approach and quickly started firing crossbow bolts into people. Not any old crossbow bolts, you understand, as these arrows must have contained something extremely flammable. Watching a guard trying to extinguish himself gave the impression that this isn’t a standard stealth game. There’s definitely room for an all-action approach. After taking out the target and creeping back onto the boat, the level was completed.

With that, the Q&A session was over. It’s clear that this game looks amazing, though to write it off as nothing more than eye-candy is doing it a disservice. We could be about to receive a game that plays as well as it looks. Considering Viktor and Sebastien’s work, this is really saying something.