The original Crysis on PC was one of those titles that came along and blew away the competition, setting the bar for future releases. This wasn’t for its standard of gameplay, however, but its unparalleled graphical fidelity. Being one of the first titles to properly take advantage of DirectX 10, it stunned PC gamers around the world with its environmental detail and stunningly realistic dynamic lighting, such as some genuinely breathtaking sunshafts through tree branches, for example.

The mode had large maps and interesting game types, but I always found it a little clunky, unfocused and imbalanced. My experiences would range from enjoyment to boredom or frustration. Crysis 2 is on the horizon for Xbox 360 and PS3 this time as well as PC, and a multiplayer demo has just been released, exclusively on 360 for now though. The question is, is the multiplayer of the second iteration largely the same, or is it in fact a ‘far cry’ from the original?

There’s the old clichéd saying, that if it ain’t broke, don’t fix it. Well, the online component of Crysis wasn’t exactly in tip-top order, and Crytek have certainly done a lot of fixing. No, scratch that actually, Crytek have obviously carefully assessed the multiplayer of Crysis 1, analysed its strong and weak points, determined what needed to be changed, and threw the whole goddamn lot in the bin and started over again. It’s definitely still Crysis 1’s younger brother, but it’s as if since giving birth to her first son, their mum has become a whore, and slept around the whole FPS genre. Who is the daddy? The answer; all of them. 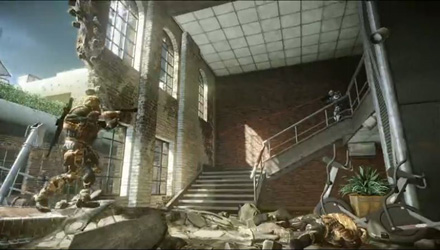 You could have knocked…

Let me explain. Playing the multiplayer demo of Crysis 2 feels very familiar in so many unexpected ways. Parkour (free running) skills straight out of Mirror’s Edge. Unarmed combat and floor slides adopted from FEAR. Suit abilities and hologram spawning ala Halo Reach. The biggest influence by a mile however, is Call of Duty. Sorry to bombard you with a shopping list of features, but Crysis 2 has multiplayer ranks up to level 50, unlockable weapons, attachments and perks all customisable in a ‘create-a-class’ style mode, in-game EXP bonuses for headshots, exacting revenge and protecting teammates, killcams, killstreak bonuses at three (radar), five (airstrike) and seven (aircraft) kills, and one-hit-kill melee. Does that sound painstakingly familiar at all?

It’s as if a devoted fan has modded Modern Warfare 2 with Crysis weapons, skills and skins. You can understand Crytek’s thought process; a game that has sold so phenomenally well is worth imitating. The problem is, since the first Modern Warfare, the Call of Duty series has already lazily rehashed itself with every release, and so it’s not really welcome for other game series to do the same.

Well, how fun is this melting pot of first person shooters? To its credit, very, actually. To be fair, having a hybrid of all of your favourite parts of other FPS games is pretty awesome. So, time to judge the demo on its own merits. Only one map is supplied which is a shame, a close to medium range map on a rooftop, complete with greenhouses, a helipad, and the interior of the top floor. This arena, aptly named Skyline, is a really nicely constructed map that I seriously hope is representative of the quality that we can come to expect from the full roster. 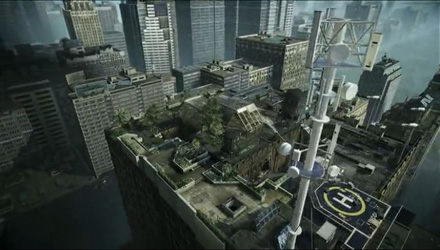 Combat is certainly varied, as despite a fairly standard selection of weapons, the abilities at your disposal really make the game shine. A quickly recharging energy meter can be used however you wish; jump high, sprint, increase armour, cloak or steady your aim. This opens up a huge array of tactical possibilities, such as climbing up the tower your opponent stands on, activating stealth and shooting them in the face at point-blank range with a shotgun. If you wish to be more conservative, shoot from afar at a great vantage point, with armour and steady aim activated to transform you into an unstoppable sniping God.

The main issue with this enormous range of skills is that they somehow all need to be mapped onto a console controller. The implementation is probably the best Crytek could have achieved under the circumstances, but at times trying to use all of your abilities effectively makes you feel like Homer Simpson frantically mashing away at his control console to stop the whole nuclear power plant from melting down.

A simple task like walking cloaked up to an enemy, quickly deploying armour for protection and shooting them at maximum efficiency could technically require LB to stealth, RB to switch to armour, B to crouch and LS to steady aim, L trigger to aim and R trigger to fire, all necessary within a split second to ensure you can catch them by surprise and fire on them with accuracy. The majority of people will only really use two thumbs and two fingers to operate a 360 gamepad, so this requires one hell of finger ballet to pull it off. Not all of the above moves are necessary in an encounter, but if all used properly they could give you the advantage. 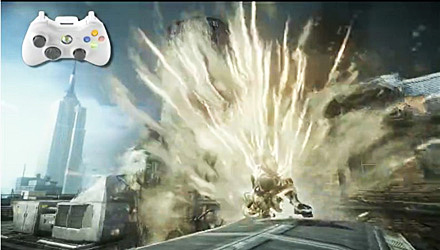 The controller warning logo represents that it’s time to replace it with a new one, after being mashed into oblivion

The PS3’s Dualshock 3 may be the better pad here, as assuming aim is mapped to L1 and fire to R1 like Call of Duty, it will feel more natural to have a finger on all four shoulder buttons (shooting with the trigger using your middle finger on 360 just doesn’t feel right). Of course, PC will probably be the easiest to control of the three platforms, but this is all speculation on my part at this point.

Two modes are available in the demo, and both of them are arguably a big improvement on the gameplay available in Crysis 1. The first is Instant Action, a basic deathmatch mode, and the second a Battlefield-esque mode called Crash Site, involving huddling around a dropped alien pod and crossing your fingers whilst swarms of lead and frag grenades are inevitably thrown your way by the enemy trying to seize it. I personally prefer the more simple ‘kill-or-be-killed’ style, as the latter is a bit of a frantic clusterfuck that seems to rely on as much luck as it does skill.

The action is fast-paced and fresh, with plenty of different strategies to switch to if the current one isn’t working for you. The shotgun, assault rifle, pistol, LMG and sniper rifle are all reasonably well-balanced and offer endless possibilities when combined with your nanosuit’s abilities. The melee system is a very potent weapon in itself, including air stomps, floor slides, quick punches and charged punches; to be honest it’s perhaps a little too potent, especially when combined with cloak. Being able to one-hit-kill someone in most circumstances out of the blue feels unbalanced and hopefully Crytek will apply a bit of well-needed nerfing to this before release. 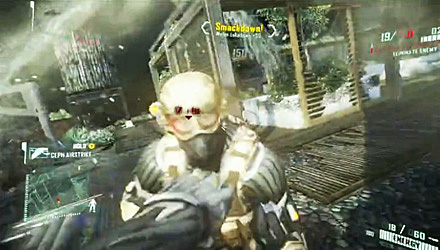 I always found the original to be clunky with some shaky hit-detection, and this has been greatly improved, although it’s still not quite 100%. At times the animation can also look a bit awkward or glitchy, and not to the standard of the impressive motion capture we’ve seen in other video-games.

Crysis used to be all about the graphics, but the demo for number two fails to completely blow you away in this area. Don’t get me wrong, it’s still quite attractive with some nice lighting effects, and there are three important factors to consider. Firstly, this is a demo which will be improved on before the final release. Secondly, it’s multiplayer which is always scaled down to ensure smooth frame-rates, and this is on the Xbox 360, which (not trying to cause any console wars!), is the weakest of the three platforms. It still definitely holds its own visually, it just doesn’t have the same wow factor as the first Crysis created a few years ago.

The multiplayer demo has definitely piqued my interest for Crysis 2. It certainly wasn’t what I was expecting, but it’s shaping up to obliterate the original game, at least in the multiplayer mode. In all honesty, I am slightly disappointed how Crysis has had to completely lose its originality to accomplish this however, resulting in some kind of freakish Frankenstein of a first person shooter. 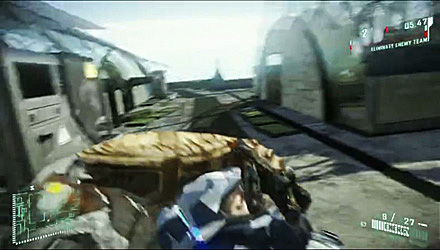 On the whole, I am at least pleasantly surprised by how well all of these plagiarised elements fit together, creating an addictive and diverse playing experience. Some technical issues aside (that will probably be mostly sorted out by release), if the single player campaign of Crysis 2 is as fun as the first, this is going to be one hell of a damn good package altogether.