The term ‘beta’ has a very different meaning to what it used to. Whereas it used to refer to a crucial stage of development in which testers would help developers discover bugs and gameplay flaws, it’s now often simply a marketing tool to give the public a demo of an almost-finished product, getting them salivating and reaching for those credit cards and pre-order buttons.

The new open beta of Crysis 3 is no different. Released on the 29th January, it’s available to anyone on PC, Xbox 360 or PS3 wanting to get a taster of the upcoming shooter’s multiplayer mode. As a fan of the Crysis series I downloaded the beta from Origin and got stuck in to the two available modes, Hunter and Crash Site.

Hunter is a new addition to the franchise, and plays like a deadly game of hide-and-seek. As a group of CELL operatives, your one and only task is to stay alive. Simple. Except for the fact that your opponents, the Hunters, are all packing lethal bows that kill in one hit. Oh, and apparently they’ve also brought their Garmins along, as they can detect you at all times on their mini-map. Not to mention the fact that once your team-mates die, they’ll respawn on the Hunter team so that you become increasingly outnumbered.

Cue one of two strategies: running around like a maniac, screaming (in real life) and hoping that you dodge their arrows and outrun them; or bunkering up with squadmates in whichever dank sewage pipe or tunnel you come across and praying to your deity of choice. 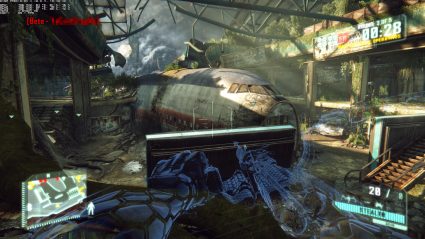 Come out, come out wherever you are…

To try and help level the playing field a little, you’ve at least got the use of a powerful futuristic machine gun that spits out bullets like enraged bees from a hive smashed with a cricket bat. A strangely clunky proximity detector also thuds to let you know that a Hunter is close and that it’s time to change your underwear.

Nonetheless, your life as a CELL soldier is likely to be brief. Not to matter though, as being reincarnated as a Hunter is hardly getting the raw end of the deal. Swarming in on your prey feels like you’re part of a pack of lions moving on some tasty-looking gazelles that have gotten themselves cornered.

I found Hunter mode enjoyable for the most part, although I imagine it’ll be a polarising gametype when the game releases later this month. Playing as a Hunter will be popular, but half of the time you’ll be on the CELL team, huddled up in a room somewhere and hoping that no one finds you. I think many will find the concept of a first-person shooter mode where conflict is best avoided a little hard to stomach. 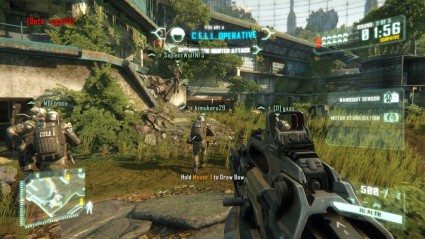 Thankfully, Crash Site is the more accessible of the two modes included in the beta. Originally making an appearance in Crysis 2, this take on the traditional King of the Hill mode involves capturing alien pods that crash-land throughout the level. With a variety of weapons available to all as well as the nanosuit abilities that Crysis is famous for, this is a gloriously chaotic slaughter-fest that affords a smorgasbord of potential strategies.

If enemies are holding the alien pod, you could jump from above and smash into the ground with an air stomp, knocking enemies flying. If you’d prefer not to get your hands dirty, you can cloak from afar with a sniper rifle to take out foes like a silent assassin. Failing that, just march right in there with armour mode activated and raise hell with a shotgun, machine gun, or one of the crazy new alien uber-weapons.

There’s also a hilariously overpowered tripedal vehicle introduced in this mode called the Pinger. Whereas the rest of the game feels very polished and ready to ship, this is one aspect that seriously needs the balancing looking at. Imagine placing a tank from Battlefield into a scenario with the map size of Call of Duty (but with even less anti-vehicle weaponry), and you’ve a good idea of the mayhem that this causes. The first time I climbed into one of these Star Wars AT-ST-like walkers, I effortlessly racked up a 10 kill-spree. 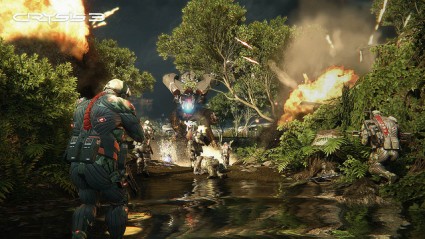 I’m in your beta, killing… well, everyone.

The beta offers two multiplayer maps to test out both game modes in, including the murky ruins of Museum located in downtown Manhattan, and the dilapidated, overgrown Airport. The latter arguably has more character with a good mixture of close, medium and long-range combat along with a vibrant colour palette and mountable patrolling aircraft. Nonetheless, Museum is still a competent arena with an emphasis on verticality and good sniping opportunities.

Of course, the franchise is famous for its high graphical fidelity (and equally infamous for its high system requirements), and Crysis 3 is no different. I played the PC version and was suitably blown away by the attention to detail and sumptuous lighting and explosive effects. Even my recently-upgraded rig couldn’t manage to play the game with all settings turned up, despite being able to max out Crysis 2. It’s comforting to remember that Crytek, AMD and Nvidia all have work to do in optimising the game to run on our systems, however.

The multiplayer of Crysis 2 was a huge overhaul from the first Crysis, introducing a lot of new mechanics and much-needed polish. From the taster available here it appears that Crysis 3 will be more of a refinement this time round, building on the solid groundwork of its predecessor whilst adding enough to make it feel fresh. It’s early days, but it’s shaping up to be the best Crysis multiplayer experience yet.

The beta runs until the 12th of February, so whether you’re a long-time Crysis fan or a newcomer to the series, you’ve still got a week to download it and give it a try yourself.