Dead Space is a name synonymous with bumps in the dark, monster dismemberment and sating our thirst for a decent Aliens game while we wait the endless wait for Colonial Marines. After two relatively successful releases the series is back this year for another round, inducting it into the Trilogy Club that counts Mass Effect, Fable, Assassins Creed and Saints Row among its recent inductees.

Seemingly making a departure from the shit-scary corridors of a spaceship, this limited release demo sees unfortunate engineer Isaac Clarke dealt another bad hand after his ship crash-lands on a freezing planet. The big question is, can Visceral Games retain the tension and fear the series is famous for in these large, open-air environments?

Short answer; no. While the demo does a good job of showcasing the game’s pacing and mechanics, it does little to inspire confidence in those who were concerned about a drastic change of direction. Opting for an action-heavy slant, complete with the worst cover system ever known to man, the first twenty minutes will bleed any hope of another game like the first from your anguished veins.

That’s not to say it’s bad. Graphically it’s a step above, firmly in league with recent stunners Resident Evil 6 and Far Cry 3. It plays very much the same as its predecessors, with tight, responsive controls and all the classics present. Isaac can still stomp his quarry to reveal items within the squishiness and still has to ping a little AR line across the floor to guide him. Staple powers Stasis and TK return and work in much the same way as before. If I’m honest, not much has changed really.

This can be seen as good or bad depending on your viewpoint. Dead Space, while obviously influenced by Resident Evil, cut its own niche in the third-person horror shooter genre and felt completely different to the touch than any of its peers. Dead Space 3 has retained that uniqueness, but truth be told it now feels a little clunky and old. 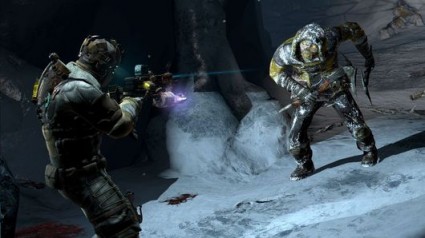 It’s Dead Space, then. In the ice. Woop.

The gameplay changes don’t help much, either. Enemies are lightning-fast most of the time and Isaac’s slow plod and only-slightly-faster run, as well as his complete inability to dodge, make him an easy target. It’s all well and good telling us to ‘aim carefully’, but when the enemy is in your grill within a second all that goes out the window.

The most annoying new addition are the heads with spider legs. Once they possess a dead body, that body becomes an extremely durable zombie-thing, complete with the ability to shoot at you. They take way more damage than the average Necromorph and even the spider-head things can take a pounding. Being shot at just feels plain wrong and the aforementioned cover system makes it even worse. It’s as if Dead Space has seen Resident Evil 6 doing the cover-shooter thing and wanted to be in the new gang with disastrous results.

One thing that may help is the new crafting system. It seems like these days every game’s got one. Expanding the workbench mechanic from the first two games, it allows you to build and completely customise favourites like the Plasma Cutter and Pulse Rifle to your liking, as well as a whole bunch of new shooters.

Good in theory and a little clunky in practice, it’s impossible to see at this point how useful it’ll be in the long-game. It’s certainly fun to arse around with though; I made an entirely Tesla-based rifle, with a long-range leccy beam as its primary and a short-range burst for its secondary. It was about as useful as a bit of wood in combat, but the fact I could make it shows a willingness by Visceral to allow us to make mistakes and figure it out for ourselves. 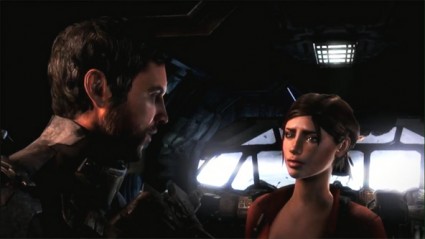 Isaac takes of his helmet quite a bit in this one. Shame he looks like a malnourished Desmond Miles then…

As for the demo itself, it’s incredibly short for the enormous 2GB download. After a few icy caves full of crates and Necros and a shaky QTE (uh oh!) you end up in a courtyard. A fellow survivor is quickly silenced by a massive monster which serves as the demo’s first ‘holy shit!’ moment, as you stasis the thing and blast off its limbs until it runs away like a pansy. A few more doors, caves and corridors peppered with intermittent encounters and you start getting shot at by soldiers who, according to a discovered audio message, need to kill you otherwise their religion won’t survive.

As a veteran of the series I sort-of understand that as a reference to events in the second game, but newcomers will be entirely in the dark. Either way, after wrestling with the cover system and dealing with them, a simple task of freeing a jammed drill to clear your path becomes a frustrating event that perfectly showcases the gaping flaws in the game.

The drill is going nuts, grinding up the tiny circular area you’re in. Infinite enemies of numerous types flood out of the many doors around the room, none of which you can escape through. Your main goal is to stasis the drill so you can shoot through its spinning arms, aiming for the glowing power thing in the middle. Manage it and you’re rewarded by having to do it three more times.

The camera, the control, the weapons… everything is designed for exactly the opposite style of gameplay. A section that wouldn’t look out of place in Gears of War feels so wrong here. After a few deaths (mainly due to getting mobbed and not being able to see half the time) I managed a win, only to be rewarded with a nonsensical cutscene and an unskippable trailer that I’d already seen many times over as it plays every time you die.

I’d be lying if I said I’ve been chomping at the bit for this game, but after playing the demo I can safely say I won’t be buying it. It seems that in an effort to keep up with the Capcoms, Visceral have thrown in a bunch of needless action crap. It’s trying to be Resi 6 so bad, complete with QTEs wherever relevant. This doesn’t have to be a bad thing (I’m one of the supporters of the new direction Resident Evil has taken) but with almost no change in the mechanics or controls to counteract the acceleration in pace, it falls flat on its helmeted face. The demo will likely be up for download to the public sometime soon, so give it a go. You just might enjoy wrestling with the controls against unfair odds. I certainly did not.