Kane and Lynch: Dead Men was a bit of fun. Remember that, fun? With a market awash with epic tales and elaborate plot lines, the two loonies settled for just plain ultra violence and I quite liked it. Sure, the story was about as upbeat as a meeting for terminally ill Al Qaeda members, but the game play was more than enough to make up for that. Right? Well, not so according to the big press machine, who pretty much panned the game from start to finish.

The controls were flaky, it offered nothing new and the plot really started to depress in its final hours. I agree with all those statements, and myself and the friend who I played it with finished the game in a day and felt wholly underwhelmed by it all. Not content to let sleeping dogs lie, IO Interactive instead decided to give the franchise another chance. The result: Kane and Lynch 2: Dog Days. How they got the cash after the flop of the first game is anyone’s guess, but that’s not what we’re here for. The demo is now plastered all over the Xbox Live Marketplace and PSN, but short of trying it for yourselves here’s my little impression of the Ps3 version. Enjoy.

The first sign of the big changes appears before the menu even loads, or ‘buffers’. You see, the big hook in Dog Days is that everything is on youtube. Not literally, but IO have grabbed the ‘internet video’ bull by its horns and everything looks and feels like digital, internet video. This is apparently an attempt to make a more realistic-looking game. It’s a fresh and modern concept and one that continues to show promise throughout the demo. So many games these days opt for an attempt at photo-realism and instead end up with a game that looks like a game. Props to IO for changing tack, and the fuzzy, degraded, lo-res graphical style actually does its job pretty damn well.  So, after the buffering we get a basic menu, a little creaky but I’m sure that’s something that will be ironed out in the full release, or left to rot because no-one will care.

Kicking off the game is a mildly interesting cut-scene giving some back story as to why Lynch is in Shanghai and why he’s roped Kane into coming over to see him. To be honest I missed it; the game is seen from Lynch’s perspective this time round and he’s what you would call a loony. The cut-scenes are all disjointed and messed up, echoing his fractured mind I expect. Good for effect, bad for plot continuity. Never mind though; as soon as the boys sit down to a nice bowl of noodles in a local eatery, riot cops bomb in and start filling the place with lead. Cue violence.

Control-wise, Dog Days is enough like the first game to be familiar to veterans, but  different enough from the usual cover shooter to confuse newcomers. It sits awkwardly between being intuitive and being fiddly. Aiming and shooting is fine, as is taking cover, but other actions like reloading and picking up guns are stuck in unusual places and with only a few seconds to glance at the control set-up before the claret starts pouring it takes a little while to get comfortable. 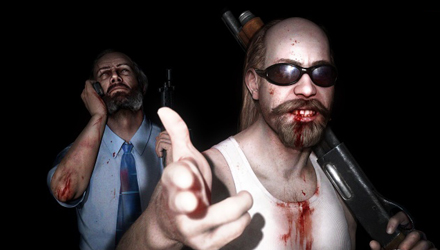 Might as well get this out there quickly; Dog Days is hard. Cover splinters from a few shotgun shells and you have to constantly dart around to survive. As soon as you get a feel for the game this is brilliant and adds a level of sweet realism to proceedings, as do the guns. Pounding and flashing all over the place, there is barely a dull moment. The first section is the restaurant, which quickly becomes a splintery bloodbath. Grabbing a few new guns and darting from cover to cover gets me through the place and out the back, where I find the staff all tied up. Not before I get a nasty surprise though. If you get hit with a powerful round at close range but don’t die (somehow?) you end up on your arse. From here you can pound your aggressor full of hotness or jump up into cover if there’s some around. It’s a nice touch and makes you feel like you’re just about surviving. Back to the hostages, and another digital effect comes in. My sadistic streak got the better of me and I shot one in the head to see what would happen. Sure enough, brains everywhere, but also a pixel box over my quarries freshly opened head. I imagine this is to ape censorship and it works great.

Busting out of the back of the Chinese, I come to a busy street. Kane mumbles something about keeping a low profile but still runs about, shotgun in hand so I do the same. Soon enough the coppers show up, this time the regularly uniformed garden variety Chinese bobbies. I swing myself behind a car and plug away, and it’s then that I notice something. Lynch is a bloody awful shot. The police can cap you in the face from 500 yards with an automatic rifle, yet grab one yourself and you’ll struggle to hit anything that isn’t within spitting distance. Even the steady little revolver is crap.

Considering the only ammo comes from dropped guns and most of these are dangerously out of cover, it’s hard not to fall short of bullets. If you do find yourself lacking in the munitions department however, there’s a cool alternative. Grab a fire extinguisher and lob it at a group of enemies and with a tap of RT you’ll pop a round in it. This makes it explode fantastically, casting pixelation and artefacts (funny lines on the screen) across your vision and making the whole camera lull around for a bit. The camera effects really add to the demolition, in fact they add to everything. 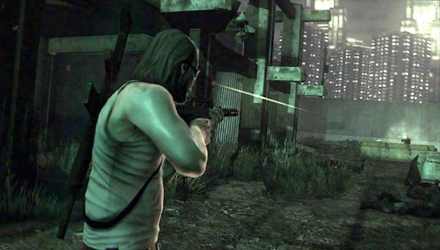 It looks nice, but the camera can be a little unruly sometimes...

Plug all the beat cops and the demo is over. It’s pretty short as demos go, but there’s a lot of fun packed in. I played through about ten times in a row, and only then did it start to grate. I can’t tell if it was the gameplay or playing the same level over and over, but I suspect it was the former. You see, while the gruesome twosome have come on leaps and bounds since they were Dead Men, they still haven’t got that special something. The web video angle is nice, but dig deeper and you’ve got a gritty yet limited cover shooter. Kane and Lynch are still no fun to hang around with and without knowing any plot details I can’t ascertain whether their journey will be as miserable as their last one. So, I’m not sold, but the demo is fun so give it a try.

Kane and Lynch: Dog Days is a firm rental for me, but if you were a solid fan of the original or are looking for a new twist on an age old formula then look no further. The fan service is obvious here; we’ll just have to see if that’s enough for everyone else when it’s released for 360, PS3 and PC on 20th August this year. More importantly though, will it be enough to goad people out of saving their cash for the hotly anticipated Mafia 2 the week after? Only time will tell…