In my pursuit of gaming gold, I expected to be landed with some right awful rubbish to play. When the first shiny Lovefilm envelope graced my doormat and I prised it open with apathetic pessimism, I fully expected to be faced with a travesty of gaming; or something I’d never even heard of. Imagine my surprise when, instead of the sinking feeling we all get when we realise an ordeal is ahead, I found myself taking Atari Anthology for the Xbox from its plastic case.

I’m not a big fan of retro games, but knowing Atari’s legacy and enormous fan base, I was confident I’d enjoy this one. The disc has over 80 games on it so reviewing each one would take an age and serve little real purpose. Instead, I’m going to look at the collection as a whole and decide if it does its job.

Does it allow nostalgic gamers from way-back-when to relive their childhood gaming delights, or just give the kids of today a reason to laugh at the past? Let’s see, shall we?

Bloop, bloop, bloop, bloop…
The Atari was not exactly the most technologically advanced piece of kit. Only a margin of games available showcase its full potential, and even then the result of this potential is shaky at best. I understand it was one of the most successful home consoles of all time and is still regarded by many as the definitive home entertainment system, and up against today’s feast-for-the-eyes mega-consoles it has absolutely no chance. So I’m going to take it all in context and assess it as it is.

The interface of the disc is strange. Organized like star constellations, each pattern represents a type of game; action, adventure, sports, etc. Each star is a game, surrounded by planets that modify the game experience. Despite interesting options like double speed and time attack, none of them really change the core experience that much and feel like filler. While this setup looks nice and is surely preferable to boring text menus, it takes an age to navigate. Whooshing between stars is an obvious cover for loading, but loading what? It’s not exactly a graphical firework display, and it shows how little effort was put into optimizing the system. Navigation is placed on the D-pad, which is a mysterious decision given the general opinion among gamers that the Xbox D-pad is for want of a better word; shit, and difficult to use. Hidden in a bizarrely samey bonus menu are some tiresome interviews with Atari founder Nolan Bushnell. While the inclusion of these make sense, they’re so boring and badly shot that one viewing of each is more than enough for anyone. Along with these videos is a hotchpotch collection of Atari stuff, from console manual scans to posters, promotions and merchandise. It feels like someone has been rummaging through the bins at the old Atari office and really does the package no favours, although gamers looking for memory-joggers may find a few here.

One button?!
The first thing that struck me about most of the games on show was their simplicity, both a strength and a weakness depending on the title. It astounded me how much players had to use their imagination back then. Shooters like Space Invaders and Missile Command are easy to follow; shoot everything and try not to let it shoot you back. One button to fire works well and no other control options are needed. Other titles however, such as the ever-confusing Adventure, seem to struggle with the limited Atari controls. This leads to awkward jabbing of the A button, with mere pixels difference between picking up an item and dropping it. Despite scans of almost all the original instruction manuals, many of the games are impossible to follow. I’m used to in-game instructions, innovative control and well signposted tasks. Atari seems to have had no time for this, giving you only a complicated and often badly written manual to go on. Due to this, I failed to enjoy many of the games on offer, instead raising a confused eyebrow at the jumble of pixels and mash of bleeps emitted from my screen. 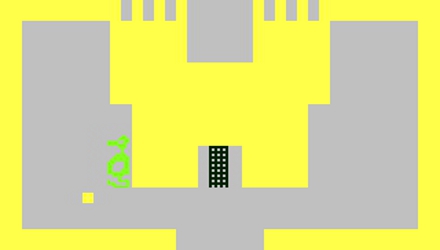 The interface, again, proves troublesome within the games. One button starts a one-player game; another starts a two-player game. Despite trying numerous techniques, my buddy and I could never seem to get it to work. Either the game relegated us to turn-based competition, or just ignored one of us altogether. This is a badly implemented system, I presume, and I lay no blame on the original games. Still, the option seems pointless when it never works. The ability to select different game modes with no real explanation of what they are or how they change the game experience also seems useless, another addition to fill the space. Oh, and pressing two shoulder buttons to exit a game feels needlessly complicated; a nice little microcosm for pretty much the entire interface.

Pixels galore!
So, Atari graphics were awful but they did hold a certain charm. I was not even an embryo when the Atari first came out, and as such the limited palette of amazingly square pixels failed to amaze me as they would have if I were born in 1960. Despite this, they do the job admirably. Most of the time. 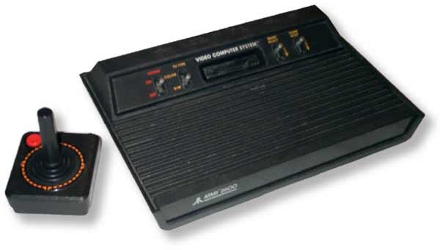 The issue I have with most of the games in the Anthology is this; lazy development. While some of the games use many colours, shapes and animations, most of them are content with green and orange squares. Strangely enough, this echoes modern games more than you first may think. These days, few of the games on offer really drive the current crop of consoles anywhere near their breaking points; most are content with just looking nice. It seems the same applied back then, and while it may have been overlooked when these titles were separate cartridge releases, it’s blatantly obvious when they’re all rammed together.

The sound is worse by far. Limited to basic bleeps, the games feel empty and lifeless. Even so, a few manage to retain some form of immersion by using the Atari’s restrictive sound chip to produce cute scores and reaction sounds. While the Atari 2600 Wikipedia page claims ‘Many games for the Atari 2600 have detailed and easily identifiable music’, this escaped me entirely.

The verdict
I’ve tried to review this fairly and within context, but that’s not really the point here. My mission is to see if it stands up against the games of today, and in that case it is difficult to judge. As an Xbox game, it provides an extensive library of classic Atari games, from the arcade to the home consoles. The interface is trash and the organization could use some work, but it does the job. As for the Atari games, with the exception of a few choice classics, they just don’t cut the mustard any more. As a modern gamer, the ancient workings caused me more confusion and frustration than joy, of which it offered little. While I’m sure they were fantastic for their time, the simple fact is; this is obviously an attempt to acquaint new gamers with the old guard, and maybe that guard is just a little too old. If the 2600 was your first console, pick this up for a trip down memory lane. If your definition of ‘retro’ is Tomb Raider on PS1, avoid this at all costs; no fun will be had here.

So there you have it. No gold yet, but as this is venture numero uno there’s ample time ahead to find some. Join me next time when I’ll be subjecting myself to Conker: Live and Reloaded. Joy…