DFG: Call of Cthulhu: Dark Corners of The Earth

Have you ever played a game for about half an hour and thought ‘hell yeh, this is brilliant’? Have you ever continued playing and watched the apparently fantastic game crumble and descend into a miserable slog of epic proportions? No? I have. Enter Call of Cthulhu: Dark Corners of the Earth. It’s pretty much the only game ever developed by the now-defunct Headfirst Productions and was published by the mighty Bethesda Softworks in 1995. I’m not sure how well known it was (I was about 6 at the time) but until I dug it up on Lovefilm I’d never heard of it. That’s kind of the point of Digging For Gold, so I whacked it on the list and waited patiently for the powers-that-be to grace me with its shiny goodness. I don’t regret it, but I almost do. I’m getting ahead of myself; let’s start from the beginning.

Dark Corners of the Book Shop….
The games story is based on a H.P. Lovecraft short story named The Shadow Over Innsmouth and makes about as much sense as the 2010 Budget. Private Detective Jack Walters has a knack for figuring out cases without a shred of evidence and is sent to a dodgy house full of cultist psychos in a desperate attempt by the police to make sense of it all. Venturing inside, he sneaks past the violent worshipers and after messing about with some crystals finds a basement with a strange contraption. He accidentally activates it and this opens a portal allowing bizarre, amphibian-looking aliens to wander into our world. Sent mad by the vision of the creatures, he spends the next part of his life in a mental institution. When he snaps out of his schizophrenic stupor, he remembers nothing and just goes back to his day job. He gets a call and ventures to a small, weird town called Innsmouth to investigate the disappearance and possible kidnap of the new supermarket manager. This is where it gets weird. 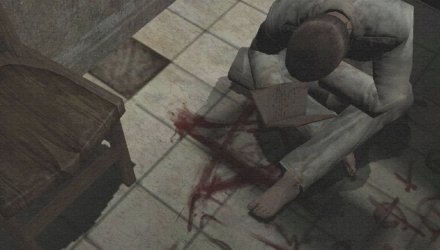 Jack was never good at copying from a book...

I’d never heard of the Lovecraft story this is based on as it’s not exactly Waterstones bestseller material. Further research proved that it was released as a novella in 1936 and original copies are exceedingly rare, only being found in the dusty annals of second-hand bookshops and specialist antique dealerships. Without knowledge of the story I had absolutely no bloody idea what was going on. All the people in Innsmouth look like their mothers had some late night encounters with the undead; all crippled features and pale skin. Our Jack doesn’t seem to think this is odd however, and the first part of the game involves wondering around, getting told to go away and desperately trying to make some headway with the case. Strangely, it works. The people make the town intensely creepy and the constant rejection really makes you feel unwanted. I began to enjoy the slow but interesting case, unravelling the mystery of the town simultaneously. A clandestine meet with a strangely normal woman and a chat with a loose-tongued drunk allow at least some discovery of what’s going on. I would have been happy to carry on investigating, getting pushed out of conversations with the locals and maybe engage in a little combat. Unfortunately, it seems Headfirst had other things in mind.

…and the Game Shop it seems.
I’ll just put it out there right away; Dark Corners of the Earth is a stealth game. Well, it’s a first-person-horror-stealth-shooter apparently. After the walking and the talking, the action starts with a fantastic sequence that will remain with me for years to come. Given a room for the night by the seemingly friendly hotel manager, Jacks psychic tendencies serve him well and he envisions shifty blokes coming to murder him in the dead of night. Cue a heart-pounding chase sequence that, for lack of a better term, really shit me up. With no weapons to hand, you must dash through the doors of the hotel, bolting them behind you to stop your attackers from just coming through. Your pursuers are always just one step behind you, no matter how quick you are, and it’s the first time since the Nemesis encounters in Resident Evil 3 that I’ve been genuinely panicked by a game. Heart in my mouth, I managed to get away on my second or third go, with one shot crippling poor Jack and making an escape impossible.

Landing in a warehouse, I hit the wall. You know; the point where you know it’s all downhill from there. I had to sneak past two armed weirdoes, using possibly the worst stealth system ever created. Stealth in first-person has never worked in my opinion; not even in the apparently amazing Riddick games. Part of what makes third-person stealth work is the ability to see around corners, over obstacles and generally asses the area without revealing yourself. Dark Corners of the Earth not only ignores this, but implements a shockingly bad Stealth Mode as well.

This mode renders movement practically impossible and imbues you with useless abilities like being able to look over cover and walk silently which is voided by the achingly slow speed at which this walking is done. There is also no way to tell if the enemies can see you, how far they can see and whether they’re looking at you or not. One time, I was caught by a bloke who looked like he was paying more attention to his friend than to me, but still saw me before he even turned his head. Looking on the internet for some help, I discovered to my dismay that I had about another three hours of this sneaking bollocks to look forward to before I even got to fire a gun. Oh, and apparently Jack is still a bit loony so the aiming is jittery and awkward. So the one thing that would’ve made all the boring, tedious creeping around worthwhile isn’t very good? No wonder this was the only game Headfirst ever made. 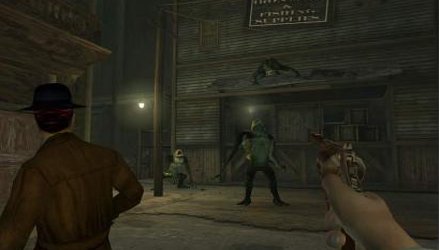 The shooting I never got to see...

Verdict
It may seem that I’ve given Call of Cthulhu: Dark Corners of the Earth (I’m getting fed up of typing that) a raw deal but that’s only because it held such potential. I’d much rather play a shit game than a game that could have been brilliant but for a few bad gameplay choices. The world, the atmosphere and characters are spot on, evoking a sort of self-consciousness rarely experienced in games. It unsettled me more than Silent Hill, and that’s saying something. If the game had no stealth, it would be gold, an independent horror triumph. Why Headfirst decided to plague its creation with miserable sneaking is beyond me. They effectively built a glittering tower of cards and then kicked it over, expecting the player to build it back up again through hours of boredom and constant retries before they can start enjoying it again. This is a perfect example of a good idea turned bad by an overenthusiastic developer, too eager to cram a million play-styles into it when only a couple were required. So before it even got started properly, Call of Cthulhu goes back in the post. Such a shame.

Neil’s Deals Best Price: Very rare and over £20 everywhere, including EBay, but cheapest price is £17.47 from Amazon Marketplace.

Bloody hell I was so close! Ah well, next time it’s all about the ‘wakka-wakka’ as I venture through Pac-Man World 3.